Pigeon Park, the notorious Downtown Eastside landmark and makeshift home of many of the area’s most troubled residents, is slated for beautification this spring as part of Vancouver’s Carrall Street Greenway Project. 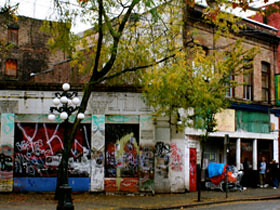 The Greenway Project aims to revitalize the area’s economy and complete the Seawall circuit around downtown with a refurbished and outsider-friendly Carrall Street. The renovation of the Park at the corner of Carrall and East Hastings is pivotal to the success of the project.

Members of the community have expressed reservations about the chances of improving the lives of the area’s inhabitants through a renovation scheme.

Jenny Kwan, MLA for Vancouver-Mount Pleasant, argues, “It’s fine for the city to want to invest in beautifying our streets, but we need to deal with the serious issues at hand: extreme poverty, homelessness, unemployment and drug addiction, these are the real problems that we have in our community”

Others like Eddie Taylor of Bladerunners, a social organization for “at risk” youth located one block from Pigeon Park, maintains that aesthetic changes can benefit the morale of the community, “The people who live here have unfortunately grown accustomed to the conditions, but if the area looks good, people will feel good.”

Some people in the community argue that without solving the homelessness and drug addiction issues in the Downtown Eastside, the renovation of Pigeon Park will do little to change the area’s dangerous image in the eyes of outsiders who will use the Greenway. 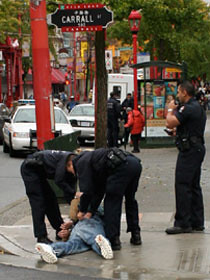 Used needles lie in nearby alleys, while the stench of garbage and human waste hangs heavily in the air.

Constable Dave Dickson, a 25-year veteran of the Downtown Eastside beat, explained, “Tourists come out of Gastown or Chinatown, take one look at East Hastings, and run right back.”

The renovations will include the restoration of the park’s concrete surface, the painting of walls, and the installation of new benches, water fountains, tables and high-powered lighting.

Dickson points out that there are five methadone clinics near the corner of Carrall and Hastings, each of which attracts many drug users. A vocal critic of the beautification plans, Dickson remarked, “They’re going to spend all of this money to bring in better lighting? Why? So tourists can see the needles and crack pipes better? You can make it as pretty as you like, these people are not going away.”

Michel Desrochers, the city planner in charge of the project, acknowledges, “it is unclear whether or not new users will feel comfortable in Pigeon Park. Restoration may not change the city’s perceptions of what has traditionally been a deprived area.”

Critics of the plan argue that it is not geared towards improving the situation of those who currently use the park, but is instead intended to sanitize the neighbourhood for tourists and the affluent individuals who are moving into the area in increasing numbers. 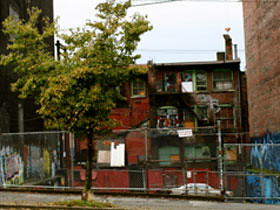 Desrochers is well aware of the community’s concerns. “Some worry that the project is a tool of gentrification meant to displace low income people and create an environment more suitable for people with higher incomes.”

Desrochers insists, however, that this is not the city’s intention. “Pigeon Park has traditionally been a living room for folks that live in the Downtown Eastside. We want to attract new users, but they will have to realize that they are walking into someone else’s space. We’re not designing it in a way that deliberately makes the current users feel uninvited or uncomfortable.”

It is estimated that the project will cost the city between two and three hundred thousand dollars, with extra funds collected from the private sector. Renovations will take approximately two months to complete, during which time the users of the park will be displaced.

The beautification of Pigeon Park is scheduled to begin this spring. It remains to be seen what impact the project will have, positive or otherwise.

The upsides of running are many: improved cardiovascular fitness; heightened overall health; increased energy and stamina. And for participants in…

Local designers are slowing down fashion to reduce waste

Mikayla Ogrodniczuk never wants to lose another teammate to suicide