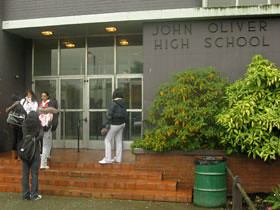 Public schools in East Vancouver are challenging notions that schools on the Westside are the place to go for a quality academic education.

Vancouver’s Eastside secondary schools, which have tended to score lower on educational reports, are becoming more competitive by offering enriched ‘mini school’ programs. The programs cater to students with interest in areas such as the arts, science, sports or leadership.

Grade 8 student Matthew Hetherington lives on the Westside of the city, but boards a city bus for a half-hour commute to attend Windermere Secondary’s Athena Arts program.

“It’s very important for people who learn in other ways beside the classic reading and writing it out,” he said of the mini school, where a test might involve performing a play.

“This is so important to the school,” he said. “It’s a way to deal with declining enrolment.”

This year upwards of 1,400 Grade 7 students will vie for about 600 spots in Vancouver mini-school programs, said Barbara Anderson, education coordinator for learning services at the Vancouver School Board.

Most mini schools admit about 30 students per year. Across the city, those classes fill up fast.

John Oliver’s program attracted so much interest that they oversubscribed each year by upwards of 100 applicants, explained Moore. He didn’t like to turn away neighbourhood students.

“I’d find out later that they were sitting at the [Prince of Wales] mini school… or somehow got into a Westside school,” he said. “I thought ‘this isn’t right.’”

So Moore expanded the program, admitting a second cohort of Grade 8 students this September.

That extra class is important. A school of about 2,000 in the ’70s, John Oliver’s enrolment was down to 1,313 students by the 2002-03 school year, according to Ministry of Education reports. This year Moore reports approximately 1,144 students, a few more than predicted. 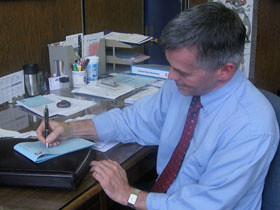 Mini schools draw in students, but schools must first invest in set up and operating costs. John Oliver’s enriched program wasn’t a sanctioned mini school eight years ago. It didn’t receive resources from the school board that older programs were getting.

Parent initiative helped in the struggle for funding that eventually led to a resource extension to more programs, said Moore, adding that the resource stretch meant funding cuts for established (mainly Westside) programs.

One-of-a-kind options are what draw some students to the Eastside.

Jamie Overgaard, Britannia’s Hockey Academy coordinator, said that the school is playing its strengths to pump up enrolment numbers.

“It’s really important to identify yourself,” he said. “The hockey school was natural” because the school shares a site with a rink-equipped community centre.

Windermere’s Athena Arts is in its first year. It sprung from parent initiative at nearby Nootka Elementary. Athena continues in the vein of Nootka’s fine arts program, which already draws elementary school students across catchment area boundaries. Graduates of Nootka’s program gain first admittance to Athena.

Matthew Hetherington, a Grade 8 student and graduate of the Nootka fine arts program, was also admitted to Lord Byng’s fine arts mini, which offers its own style of arts based education. His mother, Ingrid Kastens, favoured Byng’s well-reputed program.

Not only is Lord Byng closer to their home, “it’s an established program,” she explained, and equipped with resources that Windermere needs time to build.

In the end, Hetherington chose Windermere.

“He’s found his niche,” said Kastens, so the commute is worthwhile.

Mini school programs help stem the westward flow of students, but the perception that Westside schools are better is still strong.

That perception is reflected in enrolment numbers generally falling faster in the city’s Eastside schools.

“We’re doing that quite aggressively,” he said.

John Oliver will be working to counter perceptions that West is best at their upcoming mini school open house. In October and November parents flock to information nights, assessing what different schools have to offer.

Val Stewart’s 500 sq ft apartment is a testament to her life. The cozy space is filled with overstuffed furniture…

In a cramped room barely twenty feet from side to side, there’s a window overlooking a grimy alleyway, a few…

Matthew Boudreau lives on the streets of Vancouver, and has battled severe drug addictions since the age of 15. Eleven…