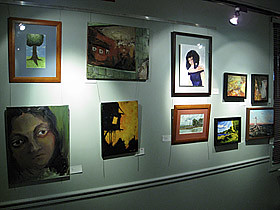 A Vancouver youth centre in Mount Pleasant held its second annual Art Gallery last week as part of a program that’s encouraging youths to fend for themselves in the work force.

The Oct. 18 event, where youths’ work were both on display and for sale, was the culmination of a summer-long art program at the Broadway Youth Resource Centre (BYRC). Each youth who sold a painting received 60 per
cent of the sale price while the other 40 per cent went towards funding the program for next year. For many artists, this was a significant step in becoming self-sufficient.

The art program is one of the many services offered by the centre that have inspired the development of other centres locally, nationally and even internationally.

The BYRC has garnered attention for its ability to provide several essential services in one space. Groups from England, Ireland, Sweden and Japan
have all visited the BYRC, interested in its integrated “one-stop shop”
model and how they might replicate it in their own communities.

“The one-stop site is important,” said BYRC manager Robert Wilmot. “And by providing these services, these youth have access to opportunities they typically wouldn’t because they are marginalized young people.”

The centre offers a range of services including meals, medical services, counseling and harm reduction, as well as housing and employment assistance. These are all found within the confines of an unassuming brown, brick building located at the corner of Broadway and Fraser Street. 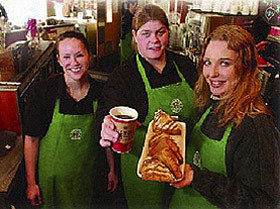 The art program is just one example of how the BYRC is helping youths to provide for themselves.

The federal government provides funds for the centre, through an
agreement between Starbucks, Service Canada and the Pacific
Community Resources Society, the agency that administers the BYRC.
This money is used to teach youths life skills necessary to gain and
maintain employment. Starbucks then takes on the youths to work as
baristas in its coffee shops.

“We teach them how to deal with customers, how to be punctual, how to
be accountable,” Wilmot said. “So [Starbucks doesn’t] have to take a kid
off the street.”

The initiative, called the Baristas Youth Skills Link Program, has been a successful one, having won the BC Career Development Award of Excellence in 2004. According to Service Canada, 60 per cent of the applicants receive employment with Starbucks, while 80 per cent receive employment of some kind within 90 days of completing the program.

“If you want to be a barista, great,” said Wilmot. “Sometimes the life skills they learn take them a different direction.” 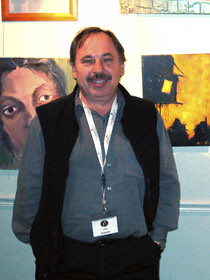 The BYRC has become a mainstay in the community as of late, having served over 3,200 youths in the last year. But it took a long time to gain Mount Pleasant’s trust.

“At one point, we were not welcomed in this neighbourhood,” Wilmot said. “Then the young people started doing things for the community. They got involved in cleaning up
the streets, they volunteered here and there, and then some of the hostilities broke
down and they were not seen as the enemies anymore.”

The BYRC can count on one community leader for his support.

“It’s an amazing place,” said Vancouver-Kensington MLA David Chudnovsky. “We all
know that there is a terrible problem with homelessness, which is particularly difficult
for young people … and this kind of comprehensive and integrated approach is really very useful.”

While Wilmot believes the opportunities that come from the baristas and art programs
are important, he concedes the bare necessities the integrated model provides are
most critical for youths.

“You need food, clothing, and shelter,” Wilmot said. “If you don’t get those basic
needs met, the rest is sort of meaningless.”

Things you should know about the BYRC

By Dan Haves The centre has been in place since September 1999. It is open to anyone between the ages…

UBC professor returns to Doctor Who