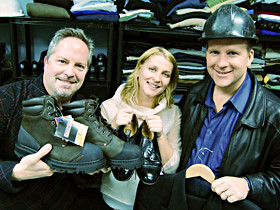 Men from the Downtown Eastside looking for work can attend job interviews in professional clothes and be safe on construction sites thanks to a non-profit society dedicated to eliminating an employment barrier.

Since it was launched in early October, the non-profit society Working Gear and its volunteers have opened their shop on East Pender Street for four hours every Saturday and helped their customers choose a free outfit from a substantial collection of collared shirts, hard hats, sweaters, safety vests and shoes.

Operating in a tiny space under a set of stairs, the group puts clothes on the backs of those who need them to work without help from government subsidies or elaborate city plans.

“We’re dedicated to eliminating a barrier that exists for unemployed men of modest means in the Downtown Eastside,” said Stephen Flynn, chair of the Working Gear board of directors. “Those barriers can include a lack of business appropriate clothes to conduct a job interview in.”

Flynn said steel-toed boots are essential for anyone on a construction site.

The DTES has an unemployment rate three times as high (pdf) as the rest of Vancouver, often due to very basic reasons. 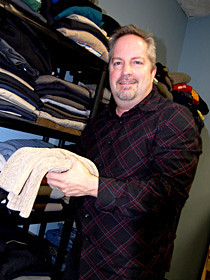 Flynn, who is also a program coordinator at Family Services of Greater Vancouver, said it’s impossible even to set foot on a construction job site to deliver a resumé unless you’re wearing a pair of steel-toed boots.

The service is geared towards men because similar organizations for women, like Dress for Success, already exist in Vancouver.

“They let us know there was a gap in services,” Flynn said. “We decided to fill that gap.”

Flynn said Working Gear outfit one man in a jacket and tie for an interview. A week passed and that man returned and said he wanted to become a volunteer.

Men who use Working Gear must demonstrate a need for the service and be referred by an agency such as Family Services of Greater Vancouver, Union Gospel Mission, Tradeworks Training Society or Pathways Information Centre.

The provision of clothing is as much about enhancing self-esteem as it is about outfitting a man for work, Flynn said.

“People have donated fantastic clothes that are clean and fashionable,” he said. “Men can walk into a job in a nice jacket or suit and feel confident in looking their best. It’s like shopping.”

A lack of appropriate clothing is just one of many barriers to employment for men living in the DTES, said Paul Zelinski, a Working Gear board member and an employment counselor at the Union Gospel Mission.

Other barriers include poor public perception, lack of education, addiction, transportation and poor housing, which can appear daunting because of their complexities. The referral agencies the men come from, Zelinski said, are busy addressing the other barriers to employment.

“It’s quick, what we do,” Zelinski said. “We get them out on the job. This all came about from psychographic research. The government isn’t subsidizing this particular need.”

Bring on the boots

June Sanders, another Working Gear board member and employee of Tradeworks, said the group has been overwhelmed by an influx of professional wear but still needs more boots. 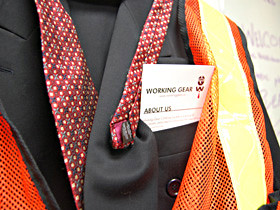 Gently used boots are rarely available because their original owners wear them out completely, she said. They can’t be rented and are sold new for around $100.

“We’d like to find a mining company or an engineering firm who might step up and offer us their boots, if they’re still in really good shape,” Sanders said.

Working Gear could also use a corporate sponsor.

“Not having $100 to buy boots is a real barrier if you’re on a low income or social assistance,” Flynn said. “The majority of your money goes towards food and shelter.”

Working Gear will accept clothing and boot donations at 97 East Pender St. on Saturdays between 10 a.m. and 2 p.m.

Limelight Video owner Donald Newton hasn’t seen crowds like this in his video-rental store for a long time. Unfortunately for Donald, these browsers have no intention of returning his rentals.

The city is working on updating laws after recent provincial developments