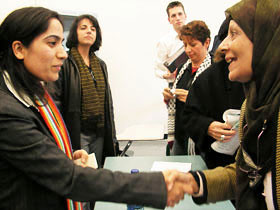 Suspended Afghan MP Malalai Joya has called on Canada to pull its troops out of Afghanistan.

She was speaking at Vancouver’s Langara College on Thursday, November 1, during a one-week tour of the province.

Joya is one of the most fierce critics of the Afghan government. She gained international attention for her famous speech in December 2003 when she denounced the participation of former warlords in the new Afghan government and demanded their prosecution.

“I come from a land of tragedy”

With the words “I come from a land of tragedy. It’s name is Afghanistan,” Joya introduced herself to the audience.

As one of the main reasons for the tragic fate of her country, she named the “wrong policy of NATO and the US”, refering to the NATO’s effort to solve Afghanistan’s security problems by giving military support to the Afghan government against insurgents.

“They supported one bunch of terrorists like the Northern Alliance against the others, the Taliban.” 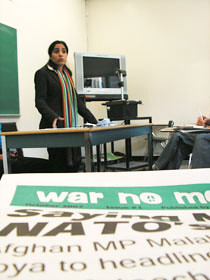 Under the leadership of the UN-mandated International Security Assistance Force (ISAF), about 30,000 troops from NATO-countries are stationed in Afghanistan. With about 2,500 soldiers, Canada is not one of the biggest military contributors but played a major role in the invasion of Afghanistan in 2001.

Canada’s troops are mainly stationed in Kandahar, a region in the south of Afghanistan where some of the worst fighting has taken place. 74 Canadian soldiers have been killed since Canada first sent troops to the country in early 2002.

Lauryn Oates, Co-founding member of the organization Canadian Women for Women in Afghanistan, wants the troops to stay. She believes that there is currently no local custody capable to provide national security.

“Malalai Joya has not fully thought through to the consequences of her recommendation,” she said. “I think it is essential that we continue to intervene, and that there is international presence. ”

The presence of the Canadian Forces in Afghanistan is likely to be extended, as Prime Minister Stephen Harper indicated in his last throne speech. He would like to prolong the troops mission in Afghanistan beyond 2009, at least till 2011.

In reaction to Harpers’ speech, Canadian Armed Forces’ Chief of Staff Rick Hillier said last Thursday that the presence of Canadian troops might be required even longer than till 2011, as “it will be another decade before the Afghan army is capable of pacifying the country on its own.”

To provide peace, “ improve the security situation in Afghanistan and assist in rebuilding the country,” are mentioned as the key reasons for Canada’s military mission in Afghanistan on the homepage of the Department of National Defence (DND).

While the U.S. government and NATO have not released any civilian casualty figures yet, an Associated Press tally recently reported that at least 203 civilians have been killed in 2007 by U.S.-led coalition and NATO forces fighting insurgents in Afghanistan. A figure, that easily surpasses the 178 civilians killed in militant attacks.

No occupation but liberation 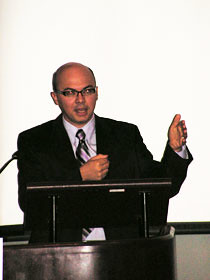 The DND also emphasizes that the military intervention in Afghanistan is conducted “with the consent and at the request of the Afghan government.”

In her Thursday’s speech, Joya said that for her the “non-democratic” Afghan government does not represent the opinion of the people of Afghanistan.

“Today the Northern Alliance controls Afghanistan and our people do not support this government,” she said.

A survey released in London in March 2007 by the Senlis Council thinktank, shows that Afghan civilians are increasingly turning against Canadian troops and their country’s government.

When asked, “Are the international troops helping you personally,” only 19 per cent answered yes, while 80.3 per cent said they worry about feeding their families.

In this sense, Steven Staples Director of the Rideau Institute, who talked about financial aspects of Canada’s military involvement in Afghanistan at the SFU Harbour Centre last Saturday, pointed out that “the whole argument shouldn’t be about troops in or out but about how can we help Afghanistan.”

Joya asked the international community on Thursday to increase the support for the “democratic forces” in her country, which are democratic parties and NGO’s.

“The U.S. should listen to the wise people of Afghanistan. Our history shows that we don’t want occupation. We want liberation.”

Jennifer Allan, a well-known activist in the Downtown Eastside, co-created DTES Cop Watch over a year ago as a new…

Students set up camp for literacy

A tent the size of a small cabin seems starkly out of place in the quiet, carpeted entrance of the…

Why payphones are still needed in the Downtown Eastside