Metro Vancouver’s new transit authority has left out the University of British Columbia (UBC) as a negotiating partner.

The South Coast British Columbia Transportation Authority (SCBCTA) was passed into law by the provincial government November 29. It replaces Translink with a new governing body that will operate at two levels of governance: a board of directors and a mayors’ council.

The Mayors’ Council on Regional Transportation will include mayors from every municipality served by transit in Metro Vancouver. They will relay transit strategies and regional concerns to a board of nine directors that will oversee planning and operations.

UBC does not have a representative on the mayors’ council because it falls under Metro Vancouver Electoral Area A – a region without a local government.

That means anyone at UBC who wants to raise concerns with the directors has no one to turn to on the mayors’ council. 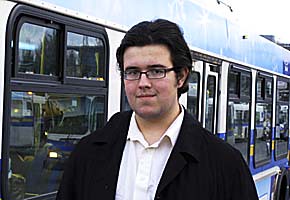 “There really isn’t the ability [for] UBC interests to be raised in a constructive and continual manner,” said Matthew Naylor, vice-president, external with the Alma Mater Society (AMS), UBC’s student council.

The AMS has been pushing for UBC to have a seat on the new transit authority since September. Naylor met with transportation minister Kevin Falcon November 28 to lobby for a UBC representative on the new governing body but came away saying that is unlikely to happen.

“There needs to be greater representation and not less and not this particular [authority] which removes any possibility of representation for the UBC community,” he said.

Hear Naylor make his case before the legislation was passed: [audio:https://thethunderbird.ca/wp-content/themes/revolution_news-20/audio/jesse.mp3]

When asked how UBC will be represented without a local government, ministry of transportation spokesman Jeff Knight said all regional interests would be raised by the mayors’ council.

“All I can tell [you] is what the legislation is and what was set out, and that was the policy decision, was that it would be the mayors,” he said.

Gordon Price, director of the City Program at Simon Fraser University, called UBC’s exclusion an “extraordinary omission” but was skeptical that the mayors’ council would have a strong voice in transit plans to begin with.

“It’s clear… that the Minister of Transportation wants to run the show,” he said. “The people who are really making decisions are appointees twice removed, who must still be consistent with what Victoria wants them to do.”

Transit directors are now be appointed by the mayors from a shortlist drawn up by a five-member screening panel. Members of the panel are appointed by groups including the Vancouver Board of Trade, the Greater Vancouver Gateway Society and the Institute of Chartered Accountants of British Columbia.

The Translink Board, which was comprised of 12 members from city councils, came under fire in 2004 when it twice rejected proposals for a rapid transit line from Richmond to downtown Vancouver before approving it on a third vote.

A 2006 Translink review recommended a new governance structure that would include a “non-political” board of directors and a council of mayors to create a more “efficient, accountable system.”

Public transportation remains a constant concern at UBC, the second highest transit destination in the region, according to Price. 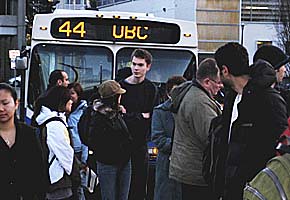 Darren Peets, a student representative to UBC’s board of governors, said transit service to the University is inadequate, citing the overcrowded 99 B-Line bus route as an example.

“The actual ridership demand at peak times is substantially above what the [99 B-Line] can handle,” he said. “If [Translink] delivered adequate service we wouldn’t have students who live too close to get on the bus or who have discovered that they have to get up two hours early to get on the bus.”

Other concerns at UBC surround an underground bus terminal to be located near the grassy knoll, a popular public space. Concerns have been raised about the safety of students in an underground space and the possible uprooting of the knoll to make way for its construction. Tunnel boring to the terminal’s eventual location has already begun.

The Council of Mayors held its first meeting November 30 and appointed Surrey mayor Dianne Watts as its chair. The new transit authority is expected to take office January 1, 2008.

Popular and majority interpretations of Islam do not allow for homosexuality, says Imam Yahya Momla

A long running debate over a chunk of land in East Vancouver could be coming to a resolution. Vancouver city…