Jennifer Allan was on a bus in Vancouver almost a year ago, watching a woman read a newspaper. The story on the paper’s front page discussed missing women from the Downtown Eastside (DTES) and the trial of Robert “Willie” Pickton, the man charged with their murders. 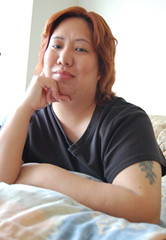 Allan leaned in and tapped a photograph on the front of the paper with her finger.

“That woman is my cousin,” she told her fellow passenger, who didn’t respond.

With the first Pickton trial over, Allan now hopes that government, police and regular Canadians will learn to respond immediately when sex workers start to go missing.

On Dec. 9, Pickton was convicted of the second-degree murders of six women from the Downtown Eastside, a Vancouver neighbourhood riddled with drugs, poverty and prostitution.

The process began in 2002 when police used a search warrant to access Pickton’s property in Port Coquitlam and later found body parts and other DNA evidence.

The Crown has said it intends to pursue a second trial for 20 more murder charges against Pickton in January.

Critics have accused the Vancouver Police Department of waiting too long to investigate the missing women and ignoring acts of violence against sex workers.

They also claim sex workers in Vancouver and other Canadian cities saw their safety drastically reduced in the 1980s when the federal government tightened the Criminal Code with the establishment of Bill C-49.

Before 1985, women worked out of their homes, brothels and strip clubs. But the new laws prohibited living off the money made from prostitution and making transactions for sex, and these women started spilling out onto the streets.

They started conducting business inside cars and in dark alleys. By 2007, 65 women, mostly sex workers, had gone missing from the DTES.

Safety of the street sex trade

“For the workers on the street … the typical old school picture you’d see of them leaning in the window of the car, negotiating with the client, is illegal,” said Susan Davis, a veteran sex worker and advocate for the decriminalization of prostitution. 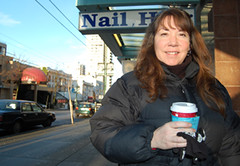 “They’ve been forced into a position where, to avoid arrest, they’ve got to just jump in the car without seeing if he’s got a machete or something like that.”

Davis said workers have no chance to negotiate a decent price and has seen women sell sex for as low as $3.

Davis said the laws foster an antagonistic relationship with the police, because sex workers have difficulty asking for help without alienating their peers.

“If workers on the street [are] seen to be co-operating with the police, they could be … you know, ostracized, or face some sort of retaliation from the community,” she said. “So, it’s been very difficult.”

Davis doesn’t work on the street but is a firm advocate for legalizing prostitution, as is Libby Davies, MP for Vancouver-East.

Davies has advocated for changes to the laws since the 1980s when she was on Vancouver city council, and when women first went missing from the DTES.

“I basically came to the conclusion that the current status of the law is not only not protecting sex workers or communities, but they are actually harmful,” Davies said.

A motion Davies put forward to Parliament in 2003 resulted in a study of prostitution laws that condemned them as unworkable and contradictory.

Davies said the laws are too generic and infringe on the rights of adults to engage in consensual sex, with or without the exchange of money.

But she said this doesn’t mean women who aren’t in the sex trade by choice or are victims of violence would be ignored.

The high-profile nature of the Pickton trial has stirred the public’s concern and maybe even changed their perception of sex workers as sub par human beings, she said.

“People don’t necessarily know what to do,” Davies said. “But they know what has happened is hugely morally wrong.”

In July of this year, the Tories rejected calls from Liberals and New Democrats to rewrite federal prostitution laws that would shift punishment from prostitutes to their pimps.

But not all those connected to the sex trade believe changing the laws will do any good.

Allan, who entered the sex trade at age 18, now runs Jen’s Kitchen, an outreach service that delivers food to sex workers on the DTES.

She was addicted to crack at age 23 but has been clean and off the streets for four years.

She said she is mostly interested in helping the women who sell sex to survive.

“Survival sex workers have to work on the street to pay their rent, buy their food and get clean clothes,” Allan said.

She sees how Bill C-49 has created dangerous conditions for sex workers, but doesn’t think decriminalizing the industry will decrease incidents of violence.

Her personal debate about the laws isn’t unique. Advocates can’t agree on whether efforts should go towards legalizing the trade or abolishing the sale of sex altogether.

Allan is worried the women who already have trouble getting jobs off the street, in massage parlours or dance clubs, will be forced to work in even more dangerous circumstances.

“We already have a hierarchy in the sex trade,” Allan said. “You have sex work and you have survival sex. A lot of it is already decriminalized and safe with exotic dancing and escort services.”

Allan said critics need to get over their hang-ups about sex being taboo and stop turning a blind eye to the industry’s deplorable conditions.

She said the national and international attention received by the Pickton trial may help critics see what’s right in front of them.

Related: “A timeline of missing women in Vancouver”

Community advocate leads the way for animal care during pandemic

David Thiessen has a developmental disability and is legally blind. He would love to have a paid job.

In recent years, there has been a wave of K-pop concerts in Vancouver