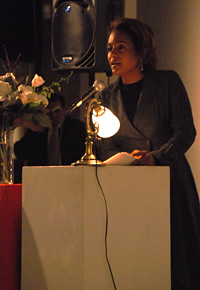 The last thing Vancouver needs is another Robert Dziekanski.

Governor General Michaelle Jean, Vancouver Police Chief Jim Chu, 150 urban artists, and Maestro Fresh Wes are in a room at the Centre A Urban Arts Forum at Carrall and Hastings.

Jean gives a speech to start the evening and finishes it early. She stops to take a breath, collect her thoughts, and turns the speech over on the lecturn. You can hear a pin drop when she goes outside of the message. She talks about her trip to a women’s centre in the Downtown Eastside, about resilience in the face of adversity. The audience is moved.

The mic is passed.

Artists talk about community and funding and hope. Homeless people watch from the outside through the large glass windows as the people inside talk about their neighborhood.

People clap. The host keeps the discussion moving along.

Midway through the first question and answer session, blue and red lights fill the auditorium and police sirens drown out the speaker on the mic. A crowd member yells: 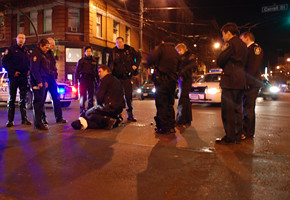 Everyone in the crowd remembers what the youth at the begining had said. A moment of pandemonium ensues. The room sounds like a plane about to crash. Everyone can see through the glass.

More than six police officers are on top of a suspect in the middle of the Carrall-Hastings intersection. A taser is used. The man is screaming.

Michaelle Jean is in the front row.

The Vice guide to irony

About two months ago I was asked, as a volunteer at Adbusters, to do some research on the “new cool.”…

Once in a while…

Move over print ad, TV commercial and yes, even you, Internet pop-up. The latest trend in media advertising is much…

And the Oscar goes to…

Movies, like all good art forms, are a reflection of their times. From big budget studio pictures to small indy…