Much has been written about youth Internet culture. One study comes out after another describing them as either a vain, exhibitionist–“me-me-culture” or a net-savvy generation, creating communities of shared interest—“we-culture.”

So it was with bit of a loud-ish groan and inner sigh that I found a new SNS site aptly called Faceworthy. Think of it as Hot or Not spliced into Flickr. (Big nod to Chang-won Kim for the heads-up on this site).

Yes, you upload your photos, members can vote you faceworthy and save you as their favourites. 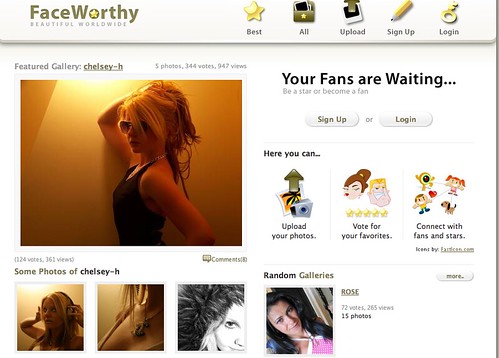 As Flickr members do, Faceworthy users an share and rate uploaded photos into photo-albums. There is also room for ads on individual member pages.

The site promises fame and money, that is, if you’re faceworthy.

The folks behind Faceworthy quickly followed with couple of other apps. CouchMob is a “Q&A and poll community where people can post questions and poll anonymously.” 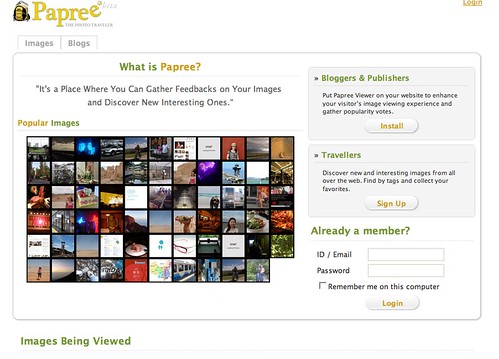 The beta version of Papree was launched only a couple of weeks ago. It’s a photo-gallery app for bloggers and web publishers. By placing a short javascript in your website, Papree will “automatically create a nice photo viewer for your images.” It will also aggregate visitors’ votes on your uploaded photos.

The brilliant minds behind this new venture are a two-man team at Paprika Lab, based in Seoul, Korea. Chang-won was impressed by these two Ruby-on-Rails talents with global ambitions.

Their business model is different from other Korean start-ups in that they offer their services in English and aim to compete in the international market (They recently released Faceworthy as a Facebook app.) In contrast, most Korean SNS ventures restrict themselves to the Korean market at the outset, building their network and services before moving onto the global scene.

As for Paprika Lab, theirs is the stuff of faceworthy dreams.

Would you feel guilty?

The talented singer Amy Winehouse, who has never kept her drug and alcohol habits a secret from her fans or…

Earlier in the week, a colleague emailed me a post on social media fatigue. A brief perusal of it, gave…

News that makes you think

When a news story related to the Downtown Eastside catches my gaze it usually falls into one of three categories….

Safe Injection is Not Sufficient

By Fram Dinshaw Since 1947, when India and Pakistan achieved independence from Britain, the death and destruction carried out in…