John Biehler isn’t afraid to admit he’s consumed by a lust for technology. The moment a sleek new gadget, preferably one manufactured by Apple, hits the market, the 37-year-old from Port Coquitlam knows he has to have it.

“For certain things, like the iPhone, it was a no-brainer. I knew I was going to have it within 10 days of it coming out,” Biehler said. “I couldn’t even get it legitimately in Canada. I had to go to the U.S.”

He figures he was one of the first people in Canada to obtain one. 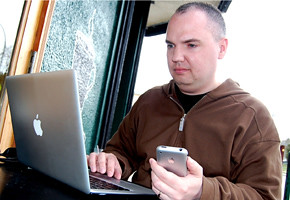 The business analyst regularly buys new products to try them out or upgrade his existing equipment. Sometimes he turns around and sells a new gadget shortly after he buys it or uses the parts to build other computers for family members and friends.

But when the thrill fades, yesterday’s gadgets being tossed in favor of the next big thing pose an environmental challenge all their own. Biehler’s garage is packed with leftover gadgets, computer towers, monitors and game systems.

A mountain of plastic bags, cardboard boxes and Styrofoam used to ship the products themselves also accompany his electronic castoffs.

Where does it go?

Not everyone indulges their techno-lust quite like Biehler, but electronics that have broken or been cast to the wayside have become common sights in landfills. They contribute to a mass of unsightly garbage and risk leeching dangerous chemicals like lead and mercury into the ground. Or worse, they could make their way to a developing country where they are picked apart for their valuable pieces and discarded.

To cope with the e-waste, the province of British Columbia banned the dumping of electronics in its landfills in August 2007 and established a recycling program with Encorp Pacific, a federally incorporated non-profit organization.

Their Return-It Electronics program set up drop off locations across the Lower Mainland where residents can bring their computers, TVs and printers.

After materials are sorted, they end up in the hands of three processing and recycling contractors in Ontario, Alberta and B.C. That includes a smelter in Trail, where mercury and copper are extracted during the smelting process. 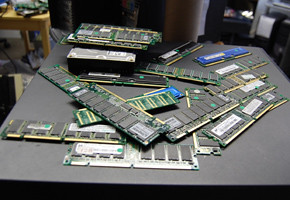 The program was initiated by the Electronics Stewardship Association of B.C., who covers costs by charging a handling fee to electronic retailers. In turn, customers pay a charge when they buy a new TV or printer from the store.

But local advocates, who have taken on the task of recycling and refurbishing computers and other products independently, are concerned about a program that works so closely with manufacturers.

There is a concern that Encorp does not sort through the products it receives and risks losing perfectly good computers that could be reused. Encorp also doesn’t accept widely used items like cell phones and iPods.

The warehouse that houses Free Geek on Vancouver’s east side doesn’t accept cell phones, but it is crammed with every imaginable computer part. Computer towers are stacked neatly in one corner, while a mass of tangled cords is stuck in another.

The grassroots organization accepts old computers from people and businesses, wipes their hard drives and either recycles the materials or rebuilds machines for volunteers who put in a certain number of hours.

“We don’t have a minimum level of age for computers,” said Ifny Lachance, one of the Free Geek founders. “Anything people drop off we will have some use for. It can still go through dismantling, which is great for volunteers to go through.”

She likes that people aren’t just passive consumers of software – they learn how it works.
Free Geek recycles parts that can’t be used, but Lachance said that recycling of computers is a complicated process.

“It can mean anything from proper smelting, dismantling, sorting, but it can also mean open burning in poor nations,” she said.

They also wipe all hard drives of all data, which is often a huge barrier for people when they are thinking about recycling their computers, Lachance said.

“When we first started, we had to go and find recyclers for out stuff. But people wouldn’t tell us where it was going,” she said. “If you want to do the right thing, it’s really hard.”

Aluminum and copper wire isn’t considered toxic waste, Lachance said, and those are taken to a scrapper down the street in Vancouver, where they can get some money for it. They do have to send some of their stuff to one of the recycling depots run by the Electronics Stewardship Association of B.C. 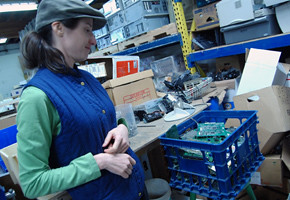 “All of their stuff is destroyed, so for us, as an organization that promotes reuse, we would rather see that things were tested and the good things were kept back,” Lachance said. “So many people need computers. It could boost productivity in the province.”

Lachance said she is at least satisfied that parts will be sent to a smelter in Trail.

“We follow everything until the end of the line,” she said. “It’s far better that we, as Canadians, take responsibility for our own toxic waste. A smelter here is going to be a lot cleaner than a smelter in China.”

Recycling should be easy

Bojan Paduh suffers some pain when he sees a perfectly good computer dropped in a bin for recycling. If he had the time, he’d jump in the bin and try to salvage the machine himself.

Paduh is a director with the Electronics Recycling Association, which recycles, reuses and disposes of computers for businesses and individuals in Vancouver, Calgary, Edmonton and Toronto. They also accept items like televisions and Blackberries.

They refurbish the computers, often donated by businesses upgrade their systems, and donate them to daycares, seniors’ homes and charities. Paduh said B.C.’s program for electronics recycling is on the right track, but needs to do better in meeting the needs of citizens.

“People are very lazy,” he said. “If it’s easy to take it to a landfill, they will take it wherever is the closest. It really has to be convenient.”

Ideally, he would prefer to partner with the government program and offer to sort the materials they receive before they are dismantled, recycled and sent to smelters. 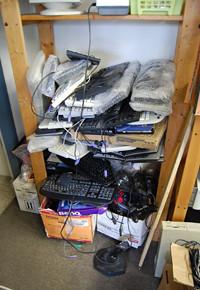 “We are pro recycling, but we’d really like to see it reused first,” Paduh said. “But people want the latest and greatest thing so we see a lot of waste coming in.”

He said he has tried repeatedly to partner with Encorp, and even offered to sort their electronics waste for them, but so far hasn’t received any response.

“It’s a sad state in B.C.,” he said. “The manufacturers have created the non-profit agency. They have huge resources and their goal is to sell new things.”

Encorp did not respond to requests for an interview.

Biehler said he isn’t without some guilt from having amassed so much technology, but he’s never enough to keep him from investing in more. He also reuses it as much as possible and tries to recycle it in a responsible way.

“I’m one of those people that believes technology can be used to help people,” he said. “So I’m going to keep using it.”

Biehler said he recognizes how some products are built with reuse in mind. He lifted up his MacBook Air to emphasize his point.

“There’s a lot of metal in there and it’s entirely recyclable.”

As other sectors of the economy recover, the hospitality sector is still 319,000 jobs short

A timeline of missing women in Vancouver

By Allison Cross 1991: A memorial march in honour of the missing women is held in Vancouver’s Downtown Eastside. Participants…