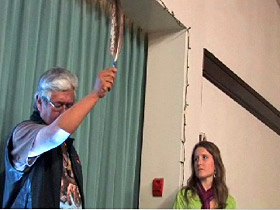 On a chilly Friday evening, a large crowd packed into the auditorium of St. James Church in Vancouver’s Downtown East Side.

They stood respectfully before the auditorium stage as the lights dimmed and three Mayans, robed in colourful Guatemalan dress, knelt before three lit candles. With upturned palms lifted in the air, they prayed aloud, in a thousand year-old Maya language.

Following her prayer of thanks, Fabiana Garcia, a spiritual guide of the Mam Nation, told the audience, “We’re here to support the Mayans and to let you know what’s going on in Guatemala.”

“We’re not supporting Mother Earth, who gives us life. Without the water, without the earth, without the trees, the wind, who can survive?”

Garcia and the crowd of some 200 had gathered at St. James to discuss and share reports of an open-pit gold mine project owned by a BC mining company, Goldcorp, near the town of Sipakapa, Guatemala.

One after another, speakers told the audience about the environmental damage created by the open-pit mines, and how the economic benefits of the mine failed to trickle down the local communities.

The speakers also described the lack of democratic accountability.

In 2005, the residents of Sipakapa conducted a referendum and rejected Goldcorp’s Marlin Project by a clear majority. Then Sipakapa voted in a mayor who campaigned against the mines but his government’s efforts, along with the referendum results, were ignored by Goldcorp and the Guatemalan government.

Faced with this impasse, the mayor and residents of Sipakapa brought their fight to Vancouver where Goldcorp’s headquarters are located.

They came to St. James to mobilize support from this diverse audience of environmentalists, First Nations members and human rights and community activists.

“We’re here to inform you of what’s happening and we’re here to beg you and to ask you for your help. We have the right to exist as human beings. To live with dignity, with clean water,” said Leoncio Ventura, a political refugee from Guatemala and leader of the Mayan Youth Alliance.

They succeeded in galvanizing support with the mixed audience because their stories resonated with each activist group.

“We’re trying to work together to make our own stories real, a reality,” said Dustin Johnson, a First Nations activist with the Native 2010 Resistance.

Watch a report on the rally at St. James:
For further information on the Sipakapa story, here is the Youtube video link to a documentary on the 2005 Referendum “Sipakapa No Se Vende” [Trans. Sipakapa is Not for Sale].
The Tyee has also covered the story here and here.

Climate change to trigger a flood of sewerage costs

On a stormy day, angry surf crashes against the Iona Island jetty with enough force to shake its foundations. The…

The historic logging boomtown of Port Renfrew is redefining its relationship with old trees. Nestled on the southwest coast of…

The real cost of K-Cup convenience

Adrienne McShane considers herself to be a very lucky legal assistant. She and her colleagues no longer have to share…

Atmospheric rivers damaged properties, farms, and roads around the University of the Fraser Valley