A record number of female candidates will be on the ballot this October 14, which has at least one woman expecting “a breakthrough” and a critical change in the makeup of Parliament. 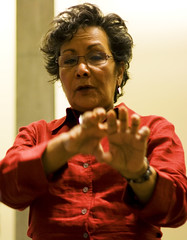 Across all federal parties, 29 per cent of the candidates are women running in 307 ridings. In total, a record 387 women are running for election.

“We have the largest number of women running in Canadian history,” said Raylene Lang-Dion, the national chairperson with Equal Voice, a federal advocacy group lobbying for more women in government.

“The door has been opened and there’s a breakthrough about to occur.”

Since 1993, and through five elections, no more than 21.1 per cent of the country’s 308 ridings have voted for a female representative, according to an Equal Voice analysis. After the last election in 2006, 64 women – or 20.6 per cent of MPs – filled a seat in Parliament.

The number of women nominated this election is at an all-time high, and Lang-Dion is excited at the prospect of more women of varying ideological backgrounds being elected.

“We don’t say that all women think alike and we clearly know that,” said Lang-Dion. “You can debate back and forth on micro-issues like that forever. But to make the issue of women in politics work in Canada, I think it’s really important and prudent to focus on getting the numbers there.”

Politicians – regardless of gender – are often polarizing figures. Past Canadian Prime Minister Kim Campbell had strong supporters and dedicated detractors. However they didn’t break down along gender lines nor was her political support based solely on the fact she was a woman breaking new ground.

And when she lost in 1993, it was to a female candidate, who said gender had nothing to do with her defeat.

“Kim Campbell – I don’t think of her really because I don’t see my defeat of her as defeating a woman,” said Liberal Hedy Fry, who has held the seat of Vancouver Centre since 1993 and is running for re-election. “I saw my defeat of her as a defeat for the Brian Mulroney government.”

Perhaps the most polarizing figure in politics today is the Republican Governor of Alaska, Sarah Palin, a woman who is both adored and ridiculed and facing accusations that she isn’t qualified.

At a forum for female candidates on October 6 in Vancouver, the issue of women in politics wasn’t discussed once. A question about Ms. Palin was rebuffed and met with immediate and out-spoken scorn from both the politicians and the audience.

Moderator Suzanne Anton said the question was “a bit distracting” and the forum instead centered on Canadian election issues.

“Sarah Palin is really getting beaten up,” said Ms. Anton afterwards. “Is she being treated harder because she’s a woman? That I don’t know. That’s an interesting question.”

After the forum, NDP incumbent in Vancouver East, Libby Davies said in an interview that Ms. Palin is not an example of biased treatment against woman.

“She has to be accountable for what she says and for what positions she articulates,” said Ms. Davies. “She clearly doesn’t know a lot about American policy and foreign policy, and I think that is now showing and she’s got to face those tough questions like everybody else.”

Whatever the views of her, the American candidate for vice-president contributes to what the United Nations describes as a critical mass of elected female representatives. Thirty-three per cent is the amount of women needed across public, private and political bodies to garner a decisive and collective amount of sway, the UN believes.

In Vancouver’s five electoral districts, female candidates make up 40 per cent of the ballot – 11 women are running compared to 18 men. All ridings save one are defined as winnable by a female candidate and three are held be female incumbents.

While a record number of women may be running for public office, a crucial question is how many are nominated in a riding they are considered capable of winning. A winnable riding is easily defined: one where the seat is currently held by an incumbent, where a party came in second by a margin of 10 per cent in the 2006 election or where parties finishing second and third were separated by a margin of less than 15 per cent in the last election.

In terms of female candidates, the Liberals lead the way with 39 per cent – or 113 women candidates – nominated for election. Twenty-eight per cent of those women are in winnable ridings.

The NDP have nominated fewer women than the Liberals with 104 female candidates, but 39 per cent are running in a winnable riding.

Of the 60 women running for office with the Conservatives, 15 per cent are in a winnable riding. The Greens have named 89 female candidates but are not considered to have any winnable ridings.

By Amanda Sung Prime Minister Stephen Harper’s attempt to use Facebook to target key youth voters is missing the mark,…