John De Villa was desperate for a solution.

The 46-year-old had suffered a dozen severe epileptic seizures over eight months in 2015 and had already swallowed every pill doctors could prescribe.

His neurologist suggested cannabis treatment and signed De Villa off on a medical marijuana card.

But when De Villa walked into a Vancouver medical cannabis dispensary for the first time, the budtender was high.

The budtenders — an industry term for dispensary employees — that De Villa met in Vancouver’s shops often couldn’t differentiate strains and seemed to make up the ratios of chemical compounds.

“Ninety per cent of budtenders don’t know what they’re talking about,” he says. “It was like walking into a retail store and buying a pair of size-nine shoes.”

De Villa visited more than 15 dispensaries hoping for medical guidance, but instead struggled with a mishmash of advice.

Dismayed, he realized he would have to find his own cannabis fix for his seizures.

“I went through hell for two years,” he says about searching for the right treatment. “I was sacrificing my own body for experimentation.”

“The majority of the dispensary owners and budtenders are incredibly green — and I mean painfully,” says Adolfo Gonzalez, founder of CannaReps.

Gonzalez launched the training startup in response to his growing frustration over “gaps” in cannabis education.

One of his efforts was a workshop last weekend called “Become a Master Budtender.”

Participants in his workshop were able to view, touch and taste cannabis, much like a sommelier who tastes wines, Gonzalez says.

Growing medical research suggests that cannabis is an effective treatment against conditions such as epilepsy. But dispensing it requires high-level knowledge.

Budtenders often rely on cannabis search engines such as Leafly, but those sources can “fail dramatically,” Gonzalez says.

It’s up to budtenders to educate themselves to a medical standard — and not all are willing to put in the effort.

Regulations around budtender education are non-existent in Vancouver, the first Canadian city to enact a municipal marijuana bylaw. Those bylaws deal mainly with development and zoning.

But just south of the border, cannabis education is a booming industry.

Dozens of online and in-person cannabis courses jostle for consumer attention in states such as Colorado and California.

In Washington state, all licensed medical-marijuana retailers must employ one certified consultant who undergoes one of three 20-hour training programs approved by the health state department.

Each consultant must also complete at least 10 hours of continuing education each year to renew their licence.

B.C.’s post-secondary schools are looking to fill the void.

Kwantlen Polytechnic University has enrolled more than 500 students in its continuing-education courses, “Cannabis Professional Series,” since launching the program in 2015.

The online courses focus largely on production, with upcoming classes on sales and drug development, as well as plant production and facility management.

“There’s a huge amount of pent-up demand,” says Jim Pelton, executive director of continuing and professional studies at Kwantlen. “A lot of people see a huge amount of opportunity and career paths in what’s going to be a very big industry.”

Kwantlen’s courses, priced at $1,249 each, are developed by up to a dozen industry experts.

Despite Kwantlen housing a greenhouse and horticulture program, “we’re limited in what we can do,” Pelton says.

The school will develop more courses around marijuana retailing once the federal government legalizes marijuana.

“There’s a real need for education. The minute it’s legal, we’ll be there,” Pelton says.

Numbers are fuzzy for total dispensaries operating in Vancouver, but estimates from industry experts range from 75 to 100. The city has licensed 36 medical dispensaries.

Each dispensary decides how to hire and train its employees. A budtender job posting by VanCity Weed, for instance, asks for experience in retail sales and knowledge of marijuana strains.

Another posting by The Herb Co. calls for recruits who are “responsible,” “reliable,” and “compassionate” for patients with a disability. 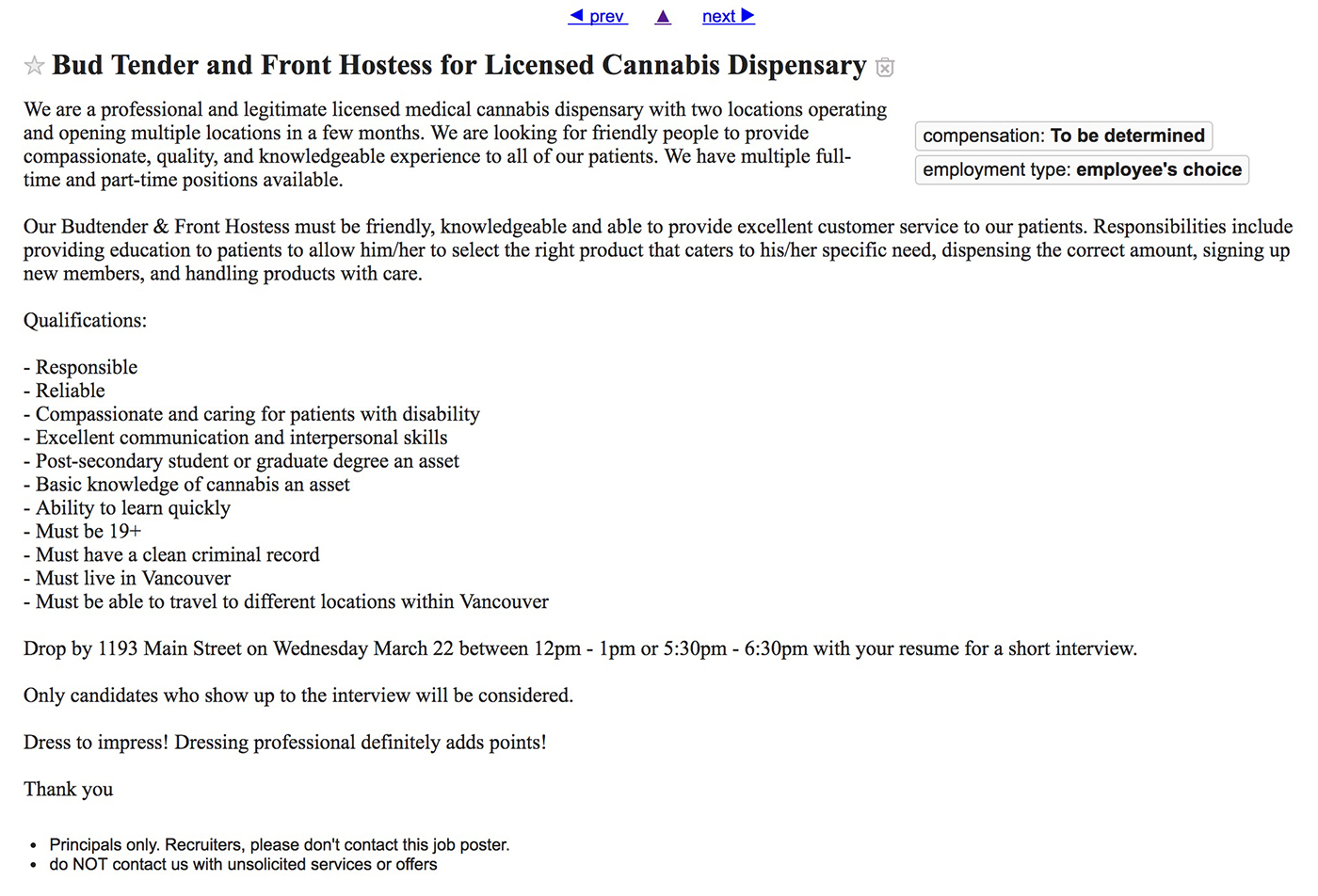 Natia Fieber has been a regular cannabis user for years. But she wasn’t “half as educated” as she is now working full-time at the medical dispensary Lotusland.

“I’ve worked here for over a year now,” she says behind the counter at the Vancouver chain’s Kitsilano location.

“After a while, you recognize the strains that come in, the ailments, and you talk to the customers and see what works for them and what doesn’t.”

Budtenders hired at Lotusland undergo several weeks of training, she says, with visits from suppliers and industry experts. Some trainees get cut. The remaining employees are then paired with more experienced staff on the floor.

“We’re really honest here,’” she says. “If I’m not sure, I’ll tell our clients that. In the worst-case scenario, I can always call the owner. And if the owner doesn’t know, we’ll call the [product] rep.”

Fieber says the quality of dispensaries varies across the city, with some shops focused on sales and recreational use rather than medical guidance.

“Some dispensaries just let their employees blaze up and get high,” she says.

“We have a regular who has epilepsy and he had a seizure in here once and we had to deal with that. But if you’re blitzed out of your mind, you’re not going to be able to do that.”

“You’re having to take that person’s word for it,” he says about budtenders. “Buddha Bliss could be something in one dispensary and something quite different in another.”

Regulations around educating and certifying dispensary employees would be up to the provincial and federal governments, says Jang, a professor of psychiatry at UBC.

“We are living in a purgatory and it’s really unfortunate we haven’t seen any leadership on this bylaw at all.”

The federal Liberals have promised to legalize marijuana by July 1, 2018, according to a CBC report. It will be up to provinces to regulate the the distribution and sale of marijuana.

The government’s cannabis secretariat did not respond to repeated requests for comment.

‘It’s been quite the journey’

After spending thousands of dollars experimenting with federal producers, De Villa finally found the right treatment for his epilepsy a year ago.

In his kitchen, De Villa fishes in a cupboard for the epilepsy medication — a benzodiazepine — he takes in small doses every day. He also pulls out two brightly coloured bottles of CBD tincture — liquid extracts from cannabis.

He says doctors are shocked by his recovery, an 85-per-cent return to bodily and brain function. He hasn’t had a seizure since last summer. One of his latest victories was regaining his driver’s licence.

De Villa spoke at Gonzalez’ “Master Budtender” workshop last weekend and says he was inundated with dispensary owners who asked him to share his story.

He’s now developing an online database with Gonzalez for medicinal users, which will give treatment advice based on conditions such as Lyme disease and epilepsy.

“I want to give back to people like myself and prevent what I went through at the beginning of my cannabis journey,” he says.

Students set up camp for literacy

A tent the size of a small cabin seems starkly out of place in the quiet, carpeted entrance of the…

Chipping and tracking technologies give owners a virtual leash