Instead of squelching sales, the ban sparked a buying spree among Alberta wine aficionados who feared running out of their favourite bottles.

As soon as the embargo was announced on Feb. 6 the Calgary Flames bought every bottle of their Penticton-produced official wine in stock at Alberta retailers. The Flames sell these wines exclusively at their games and didn’t want to run out of stock.

And it wasn’t just hockey teams that went on a B.C.-wine-buying spree in Alberta.

The Alberta government’s 17-day moratorium on imports sparked demand across the province, according to B.C. winemakers and Alberta importers. Some B.C. wineries even continued to deliver their wines directly to Albertan customers.

“At the end of the day, it put a spotlight on our industry,” said Harry McWatters, founder of Encore Vineyards in Penticton. McWatters produces the

Flames’ official wine and sells more than one third of all his wines in Alberta.

Many Albertan consumers, restaurateurs, and retailers were outraged by the boycott. B.C. wine is a highly profitable product in Alberta, where demand for local food and wine is growing. About 95 per cent of Canadian wine sold in Alberta comes from B.C.

“The calls to boycott B.C. wines had absolutely the opposite effect on Alberta shoppers,” said Tonya Lailey, a Calgary-based wine importer. Lailey’s main B.C. wine, from Sperling Vineyards in Kelowna, sold out in Alberta during the boycott. As soon as the embargo ended, she put in an order for more.

“Whenever a product has some level of loyalty, as B.C. wine does in Alberta, and consumers fear a coming shortage, they will stockpile that product,” he said.

Lots of support in B.C., no bump in sales

Social media, op-eds, and press releases in B.C. were afire with calls to buy local wines during the embargo. April was officially declared B.C. wine month and events like Farm Friends were planned by local wineries, pairing B.C. wines with Alberta beef.

None of this publicity had a significant impact on sales of B.C. wine within the province, according to the B.C. liquor distribution branch.

Meredith said, a ‘buy local’ drive would need around two months of sustained advertising before it had any impact in B.C. 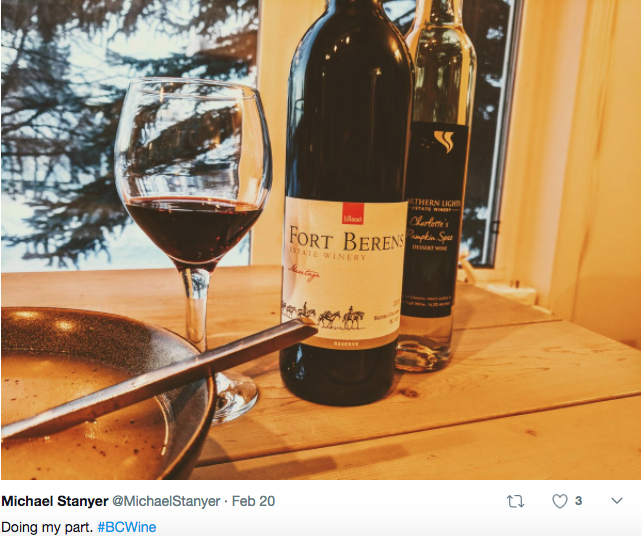 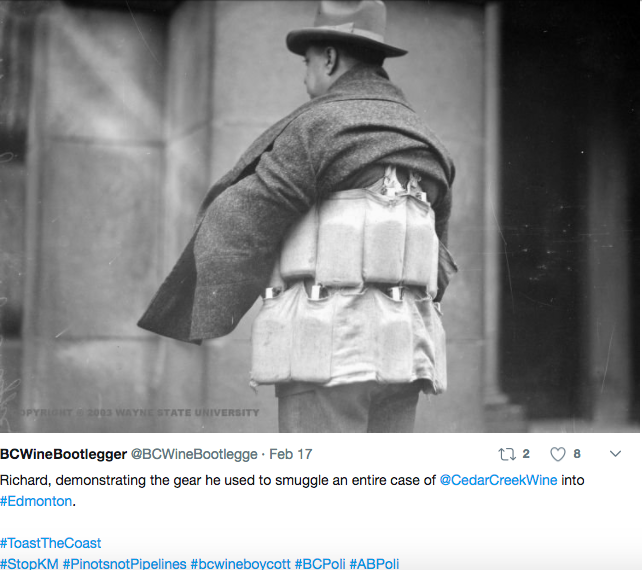 Direct deliveries continued, despite the ban

Bradley Cooper, owner of Black Cloud Winery, sells about a quarter of his wines directly to Albertan consumers via online orders. The shipments aren’t strictly legal because of existing inter-provincial trade barriers, but they generally cross the border unmolested.

Cooper continued delivering his wine during the boycott.

“We had lots of customers from Alberta calling us during the embargo, asking how they could help us,” Cooper said. “I told them, just keep doing what you’re doing, keep ordering our wine.”

Cooper’s deliveries during the embargo weren’t stopped because Notley was rolling out the ban in stages. Her first step was to halt commercial deliveries to the Alberta Gaming and Liquor Commission. Her next move would have been to target these private deliveries.

In spite of the positive reaction from Albertans, Harry McWatters insists that if the embargo had gone on much longer, it would have been disastrous for his winery. McWatters is now keeping more wine in Alberta as insurance against another ban.

Even though he saw his wines sell out in Alberta, McWatters had a few of his wine-club members cancel their memberships over B.C.’s opposition to the Trans Mountain pipeline. He fears his winery could be impacted by politics again.

McWatters is adamant that B.C. should not retaliate. He insists that a talked-about ban on Alberta beef wouldn’t be constructive. “Winemakers, farmers, and food producers shouldn’t be made into the victims of stupid politics.”

As the climate crisis worsens, building designers and architects are shifting their focus

Roxanne* spent most of her 30-year work life as a secretary in Vancouver, where she grew up and raised her…

By Laura Kane and Mohamed Algarf On a typical Saturday, French, Italian, Arabic and Mandarin echo through the classrooms at…

Food bank a pioneer in creating safety for transgender community

On a dark morning at 9 a.m., rain pours off the roof at the Salvation Army on Fraser Street. Inside,…