On the northeast corner of Hastings Street and Commercial Drive, surrounded by bus stops and an organic grocery shop, a group of protesters called Vancouver Chicken Save stand outside the Hallmark Poultry Processing slaughterhouse as they have for over a year.

VCS members meet every Saturday morning from 9 to 11 in front of this nondescript building to try and shut it down, even though it may be an impossible task. But, if all else fails, they feel they’re succeeding in raising awareness.

“Even if it piques interest in someone who’s driving by and compels them to want to learn more, then that’s a huge success in and of itself,” says activist Zoe Peled.

The truth behind farm practices

For some protesters, the Vancouver picket line is just one more effort in a long-term campaign.

Geoff Regier, an animal-rights activist in Vancouver and investigator for Mercy For Animals, has worked undercover at chicken slaughterhouses and egg farms, including Maple Lodge Farms in Ontario. The information he discovered from working on these farms inspired him to fight for animal rights and attend these weekly protests.

In the poultry industry, Regier says that chickens are genetically modified to grow so fast that they go from fluffy chicks to a full-sized rotisserie bird in 40 days.

“If you go into the back and watch the chickens going by, they look like adult chickens but they’re still peeping for their mother,” Regier explains. “They don’t make the sounds of an adult chicken.” 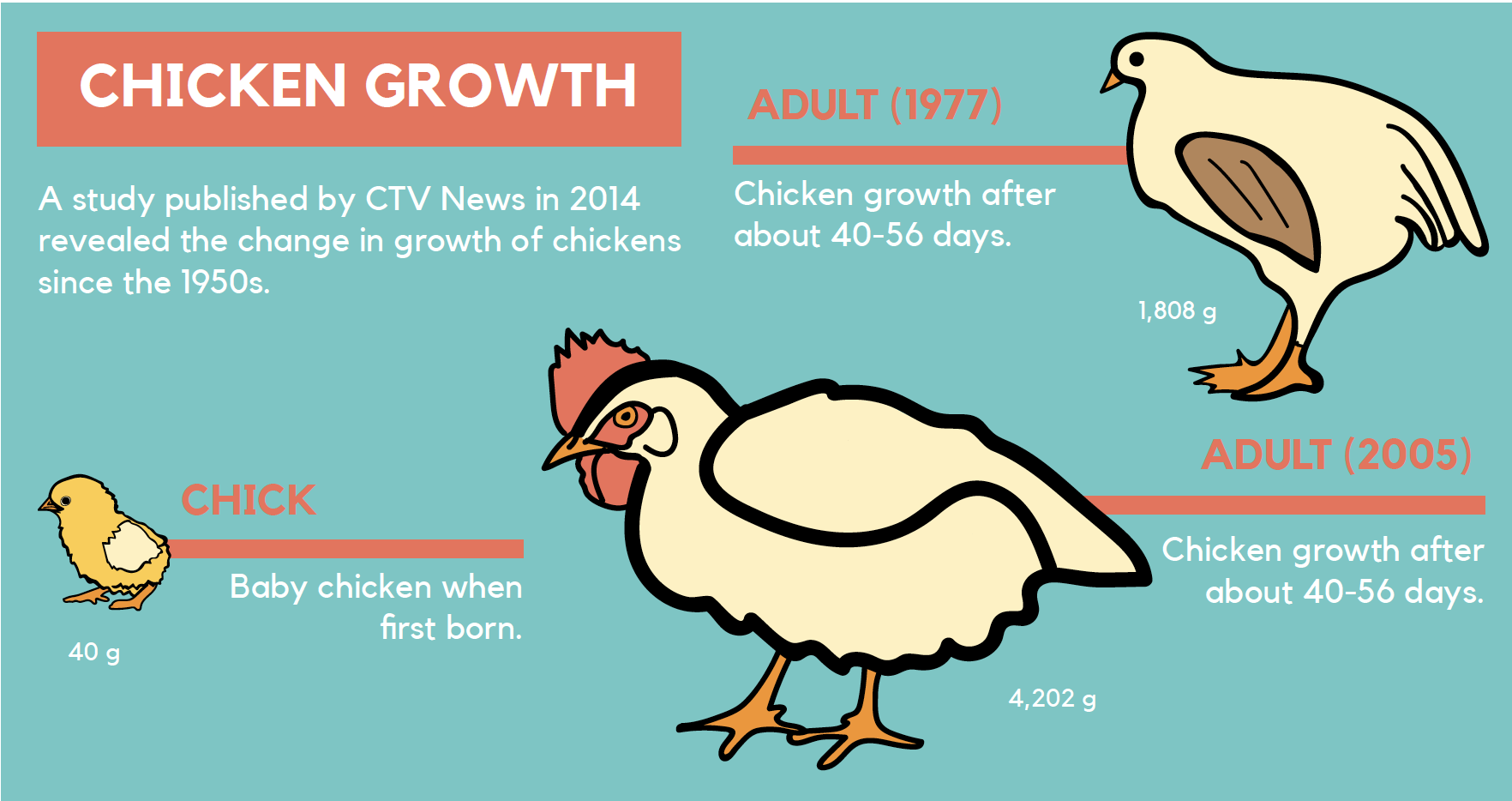 He says that he noticed while working undercover that many broiler chickens don’t even make it to the slaughterhouse because their hearts give out due to rapid growth.

“So many of them are just crippled because they can’t carry their own weight,” Regier says. “They’re genetically selected to be broken.”

The challenges with peaceful protesting

Vancouver Chicken Save’s two mains goals with the protests and chicken vigils are to raise awareness of these issues in the poultry industry and bear witness. They protest at this specific location because of its high visibility for commuters on Commercial Drive.

The group has not faced any trouble yet with standing on this busy sidewalk every week — but they have had a few run-ins with the police regarding their activity in the alley.

“We know that everything we’re doing in there is legal, so when the police have been called it’s kind of futile and, unfortunately, it’s a waste of their time,” said Peled.

Yellow lines in the alley demarcate the space Hallmark’s forklifts routinely operate. Peled says when Hallmark employees call the police on them for things like stepping in these marked areas, which are still on public property, the police are quick to show up. But when the activists make the call after witnessing acts of animal cruelty and negligence, the police often take much longer to arrive or say they don’t have time to come.

A few weekends ago, the Society for the Prevention of Cruelty to Animals line directed Peled to call Vancouver police after VCS saw a live chicken left behind in a crate that had run through the chemical crate sanitizing system.

“When a chicken goes through that process, that chicken therefore can no longer go back on the kill line and be processed,” Peled explains. “So legally they’re supposed to find a way to ethically and humanely euthanize it.”

The activists have no way of knowing whether or not the Hallmark employees follow this protocol. When they have asked questions about it or offered to buy the chicken themselves, the employees refuse to respond.

VCS reports these acts of animal cruelty to the SPCA with hope that as the complaints build up against them, the slaughterhouse could one day be shut down by regulatory authorities. Peled says that VCS would need to file reports consistently for Hallmark employees’ actions to have consequences, and that the company knows that.

“A lot of the times when something happens, the next week when we return we see them moving very slowly, very carefully. They’re checking every crate because they’re aware.”

Corie, a cruelty investigations employee at the B.C. SPCA, says that receiving calls about farm companies like Hallmark are unfortunately challenging because the National Farm Animal Care Council legally allows for a measure of distress in the animals.

“Even if we investigate a place many times, we do not have the ability to shut down a company,” she says. “We only have the power to correct a behaviour.”

Despite these challenges, VCS continues to watch out for and help investigate any acts of cruelty toward the animals in hopes of preventing them from happening.

Hallmark employees refused to respond to questions by phone and in person regarding the protests.

Holding large signs across the sidewalk, an activist holds one that says, “Honk if you love chickens!” Some drivers going by comply but Peled says that isn’t always the case.

Peled sees these comments as an opportunity because she believes a major root of change for a lot people is a shift in emotion. She hopes that these encounters with people passing by as negative as they might seem result in people talking with others about what they experienced, making their cause more well known.

Raising awareness throughout the community

As the protests become more well known and move into the warmer months, VCS activists expect to see more people come on board.

“It’s about bringing it closer to home. Bringing it locally,” said Peled. “And just letting people know that it’s happening, and it’s happening really, really close to them. So, it needs to be considered and acknowledged.”

— By Doerthe Keilholz — Malalai Joya is an Afghan politican. She was elected to the Afghan Parliament in September…

By Blake Sifton Pigeon Park, the notorious Downtown Eastside landmark and makeshift home of many of the area’s most troubled…