Hundreds of essay-writing advertisements pop up every day in the social-media groups of University of British Columbia Chinese students.

Ghostwriting, or contract cheating, refers to the practice of students using a third party to produce original academic work for them.

Although no data show how many students have paid for ghostwritten essays in Canada, the British newspaper, The Telegraph, obtained figures from two of the U.K.’s largest essay-writing services and revealed that, in 2017, more than 20,000 students purchased essays online to circumvent plagiarism checking in the U.K.

It’s astonishingly easy to find information about ghostwriting on Chinese social platforms during the final-exam season. Hiring someone to write a literature-analysis paper that’s due in three days requires no more than a search and a payment on WeChat.

“When you combine [this] predatory advertising with the pressure and the lack of confidence some students feel in their abilities, it’s not surprising to hear there’s an increasing number of students purchasing papers online from ghostwriters, ” said Meghan Corella, a UBC language and literacy education professor.

The Thunderbird contacted an essay-writing agency named “Essayonly” through WeChat. The agent said that the rate is $100 for a 600-word undergraduate essay. However, according to the price calculator on the agency’s official website, fees can increase depending on the level of complexity and the urgency of the paper. The most expensive option is a grade “A” masters-level essay for $240 per 1,000 words.

“We have about 200 writers who are either native English speakers or Chinese students graduated from elite universities,” said the agent. “We guarantee the essays will pass. Otherwise, you will get fully refunded.”

The agent told the Thunderbird that all the articles are “originally written” and will go through both quality control and online plagiarism-detection systems, such as Turnitin.

“And all the information is confidential,” said the agent. Students only need to submit the assignment description and related reading materials.

The agency’s website also shows a list of sample essays, which cover a wide range of topics from business case studies and leadership analysis to literature studies and book reviews.

Stephan Wang, who is currently working in the finance sector in Shanghai, China, was a former ghostwriter. He wrote essays for a ghostwriting agency a few years ago while he studied in the U.K. In the beginning, he only edited and wrote essays for his friends to “make a few extra bucks.” He was then approached by an agent who asked if he would like to become a professional ghostwriter.

Not only is the academic ghostwriting business flourishing, but it’s also becoming increasingly systematic.

According to Wang, a large contract-cheating agency usually consists of several teams co-operating with a due division of labor — ghostwriters, quality controllers, and agents.

“I can pick ghostwriting jobs suited to my skills and knowledge from a list published by the agent in charge of the group,” said Wang. “The organized system provides a mutual feeling of confidence to both clients and ghostwriters.”

Wang said the agents usually advertise their services on WeChat groups and online forums where overseas Chinese students congregate. Upon receiving a query from a student, the agent will post the request and specific instructions in the ghostwriters’ chat group. The writers will grab the assignments on a first-come-first-serve basis and then go to work. Once the essay is finished, the writer submits the essay to the supervisors, who check the essay’s quality and originality. 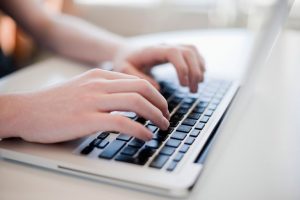 To test the agency’s claim of originality and high-quality writing, The Thunderbird provided assignment description and relevant reading materials to Essayonly and bought a literature analysis for an undergraduate-level Chinese literature course in UBC department of Asian studies. Upon receiving the essay, The Thunderbird submitted it to a teaching assistant for grading.

Though the process of purchasing the essay was smooth, the essay got a barely passing grade of 5.5/10.

“This essay completely missed out on providing any commentary on literary form, storytelling techniques, craft, etc.,” said Nicole Lin, who is a teaching assistant for a 300-level Chinese literature course, “And there were some awkwardly phrased sentences, some wrongly worded quotes, and very little creativity.”

Lin said that it’s hard to use ghostwritten essays to get a high mark for classes like the one she teaches because, even though the essay follows the assignment outline, the ghostwriter misses out on opportunities to draw on in-class discussions. 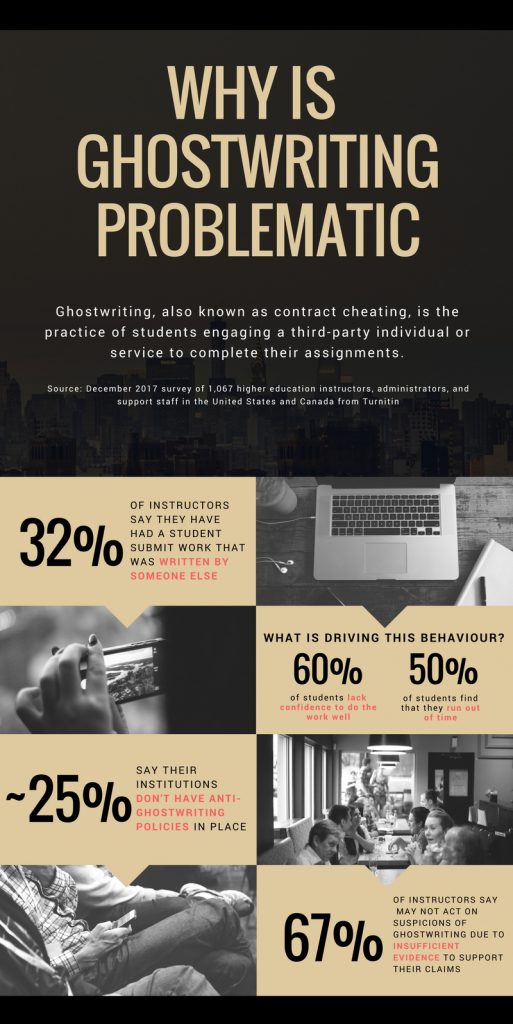 “Disciplinary actions for those discovered using pre-written essays are serious, ranging from zero grades on assignments to course failure, to expulsion,” said Eric Eich, vice-provost and associate vice-president of UBC academic affairs. “Academic integrity is fundamental to the core mission of this university.”

Monitoring and learning the writing styles of individual students is a useful way to check the originality of a student’s work, say teachers.

“Teachers who are familiar with their own students’ writing are very difficult to fool,” said professor Anthony Pare from UBC’s faculty of education. “It’s has something to do with the grasp of the specialized topic.”

Similar to Pare’s method, Corella said she checks an essay’s originality by considering the student’s other work.

“If a student hands in a paper that differs markedly in wording or arguments from their other work,” said Corella, “then this raises questions as to whether the work is the student’s own.”

Although professors who have small seminar classes can detect ghostwriting by learning their students’ writing habits, it’s harder to do so in large classes with hundreds of students, such as the Chinese literature course Lin teaches.

Even when something seems off, Lin said there is a “delicate boundary” where she does not want to jump the gun and accuse someone of ghostwriting without proof or reason.

To remedy this situation and help university professors fight against ghostwriting, Turnitin plans to launch a new anti-plagiarism software in the second half of 2018 called Authorship Investigation, which can record and monitor a student’s writing style.

Apart from cracking down on ghostwriting, “universities also need to reflect on their curricula, pedagogy, and support services, and ask hard questions about their culpability in the proliferation of ghostwriters,” said Pare.

Pare explained that, in a transmission model of education in which knowledge is “delivered” via lecture and assessed through term papers or examinations, there is little room for the gradually increasing mastery that characterizes true learning.

“In my experience, the directions given to students to guide their writing of papers is often vague, confusing, or non-existent,” Pare said.

Indeed, most students use ghostwriting services because they feel entitled to good grades but lack the confidence to do the work well, according to a 2017 survey from Turnitin, which is an online plagiarism-detection service.

“They didn’t understand the topic they were being asked to write about,” Stephan Wang said about his clients.

Pare suggested it would be better if institutions improved their conditions for teaching and learning and then tested students on their learning in a way that is difficult to cheat. From in-class summaries to oral presentations and group projects, there are plenty of methods used to gauge a student’s proficiency that can’t be manipulated by paying a third party.

“The issue of contract cheating is same to the so-called ‘war on drugs:’ cut off the source, and people will stop using,” said Pare.

For some refugees in Surrey, integration is a bumpy road

Ghada has a lot of problems. The 39-year-old Syrian refugee arrived in Surrey last June, forced to leave her husband…

Victoria Park is the new “go to” place for Grandview-Woodland residents. Grandview Park closed for renovation in August, When the…

Jillian Skeet was on her way back from drawing class with both of her boys buckled up in the car,…