For the first time ever, fraternities at the University of British Columbia will have to complete mandatory sexual-consent training for their members by Nov. 31 of every year, according to new bylaws.

But there are still gaps in the Interfraternity Council rules that exempt many members from having to participate.

The bylaws only require new and executive members to complete training, which excuses a large portion of fraternity members who fall outside of those categories.

“It’s very difficult to make an entire chapter of 100 people attend something like this. Because there’s people we can’t even get to come to meetings,” said new council president Jamie Gill.

Also, for those who do attend, the single 90-minute workshop is their only formal exposure to consent education that they are obliged to attend for their entire time at the university.

Arielle Goodman, who was an active member of Greek life and president of her sorority at Western University in London, Ont., believes this training should not exempt any members, given that mentorship is a significant part of fraternity life.

“Think about the trickle-down effect. If [pledges] see older members doing things and acting a certain way, they’re going to act that way as well to seek affirmation,” Goodman said.

The workshops emphasize developing a healthy masculinity without sacrificing the approval of peers.

Redefining masculinity among fraternity members may also influence how masculinity is perceived among other men on campus, said Alex Dauncey, the healthier masculinities co-ordinator at the assault centre. 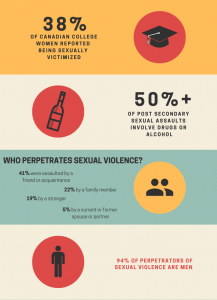 The mandatory workshop is conducted by Dauncey through UBC’s Sexual Assault Support Centre and covers sexual-assault prevention and bystander intervention. The workshop is intended to create a culture of respect within fraternities, which comprise over 1,000 students in UBC’s undergraduate population. Sororities at UBC receive similar workshops, focused on handling sexual-assault disclosures.

A survey conducted by the university’s Alma Mater Society in March 2018 found that one in 10 UBC female students has experienced sexual assault or misconduct by a member of the UBC community. That number is over one in three in sororities, whose members tend to socialize predominantly with fraternity men.

The Greek community hosts a number of events and socials with sororities throughout the year, many of which include drinking. According to Stats Canada, over 50 per cent of campus sexual assaults involve drugs or alcohol.

“Part of the undergraduate life experience is this romanticization of binge drinking and [this] pressure goes hand in hand with sexual pressures and can themselves jeopardize cultures of consent, and in fact just attribute to rape culture,” said SASC outreach worker Niki Najm Abadi.

Gill believes that this education among fraternities is vital to “normalizing the conversation around consent.”

But even though advocates say fraternities are making progress by introducing requirements for mandatory training, they say there is more to do — including going beyond one-time training sessions.

“I don’t think one is enough. But what is enough? It’s a lifetime of learning and unlearning skills,” said Dauncey.

Addressing the gaps for the future

The shocking rates of assaults within sororities demonstrate a need to move past education towards ongoing prevention of sexual assaults and to include the entire fraternity, said Goodman.

Gill acknowledges that there is still room to grow and is taking steps to initiate change before his presidency ends in January 2019.

To address these blind spots for next year, he has proposed to amend the council bylaws to require mandatory training for every fraternity member.

“Obviously the goal would be to make this be mandatory for every single one of our membership, and I think we can get to that point soon,” Gill said.

Adriane Carr is running for Vancouver City Council for the first time, but she is no stranger to campaigning. This…

Preston didn’t seem to like his spandex superman costume.  The 10-month-old Beagle kept spinning around, jumping up, looking for treats….

By Kate Adach Dorothy Moore may have tapped into a key ingredient to longevity, she just doesn’t know it. “I…

In recent years, there has been a wave of K-pop concerts in Vancouver