The University of B.C.’s only two female head coaches are used to standing out.

“There are times when it strikes you,” says Deb Huband, who is one of the two along with Poonam Sandhu. “When you go into a coaches meeting and there might be one other woman there, you look around the room and say ‘Wow, this is really obvious.’”

Men hold the other 20 head coaching roles at UBC. Many Canadian universities share this disparity. According to a Gender Equity Report conducted at the University of Toronto, only 17 per cent of university head coaches in the country are women.

Huband has run the women’s basketball program since 1995, making her the longest-serving female head coach of a UBC sports team in the last 100 years. Her accolades include three U SPORTS national championships, U SPORTS coach of the year in 2004, and a place in the Basketball B.C. and Ontario Sports Hall of Fame.

Huband was the only female head coach at UBC until last year, when Sandhu, 27, was hired to lead the women’s field hockey team. A former UBC athlete herself, Sandhu has lived and worked within this gender imbalance for years now.

“A lot of women don’t really see themselves in those roles,” said Sandhu. “It’s just been a void.”

The bigger picture for female coaches

This gender disparity is just as stark if you look at total coaching staff, not just the head coaches. Of the 119 coaches employed by UBC, only 18 are female. That’s 15 per cent, yet the university’s numbers are in line with the rest of the province.

There are only six female head coaches at the six other B.C. universities who compete in U SPORTS. This imbalance holds true among assistant coaches, where women occupy only 68 of the 287 roles. 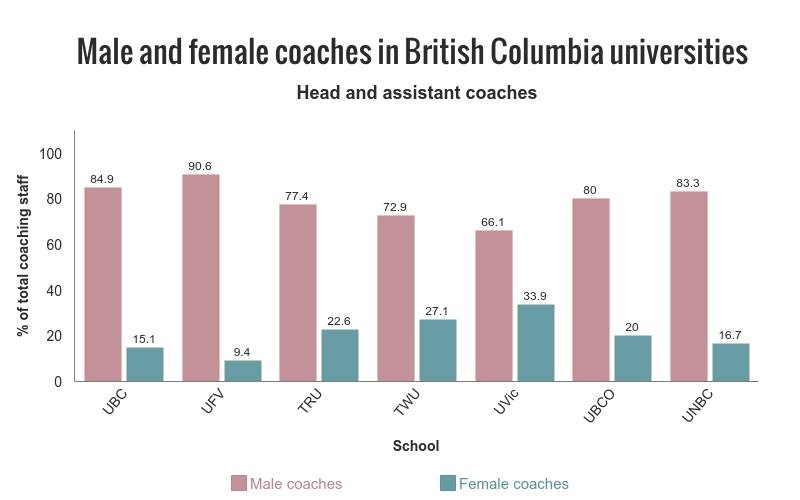 “Do I long for female coaching colleagues? Yes,” Huband said. “The perspective of the woman and the first-hand experience is invaluable and not something you can recreate by reading a book.”

Sandhu also learned the importance of female mentorship during her time as an athlete.

“It definitely helped to see other females around you as an athlete and supporting you, and not just on the field with you,” said Sandhu.

Many obstacles have hindered women from entering the profession, according to Huband. The job requires irregular work hours, weekend commitments and frequent travel. For women living with traditional gender roles and domestic obligations, coaching was not a viable option.

“There was a traditional lifestyle that many women chose, which was being a primary caregiver and taking care of their family,” said Huband. “I think it’s taken a while for the profession to grow up.”

Even as the representation of women has improved in many sectors, the presence of women in coaching continues to decrease.

As Canadian universities have created more head-coaching positions with full-time pay and benefits, more men have sought these roles according to Isabelle Cayer, the manager of diversity and inclusion at the Coaching Association of Canada.

“It made it more lucrative for coaches,” Cayer said, “And some male coaches started to gravitate to women’s sports when they weren’t getting jobs on the male side. So that’s where the trend is going.”

Sandhu and Huband followed a common path to coaching. Both were hired as head coaches because of their track record as athletes, not their prior coaching experience.

“I wasn’t a proven coach. I was a proven player,” Huband said of her hiring over two decades ago.

After winning five national field hockey championships with the Thunderbirds and representing the Canadian senior national team, Sandhu chose to move into coaching.

But opportunities for women without decorated playing careers are far more scarce.  According to Cayer, male coaching candidates do not face the same scrutiny.

“There is this myth of ‘Well, I didn’t compete’ or ‘I wasn’t an elite athlete, therefore I can’t coach,’” Cayer said. “But it’s not the case for men, right? They just step up and coach.”

Cayer expects this change in representation to have lasting effects.

“You can’t be what you can’t see, and that’s why the role-model piece is so important,” said Cayer. “We’re trying to actively recruit female athletes into coaching, but also support those that are already there in a head-coaching position as well.”

The coaching association has established a mentorship program to help close the gender gap in coaching. The program not only encourages recruitment of female assistant coaches and pairs them with a senior head coach to learn from, but also issues grants to supplement the often meager salary offered for these entry-level coaching roles. 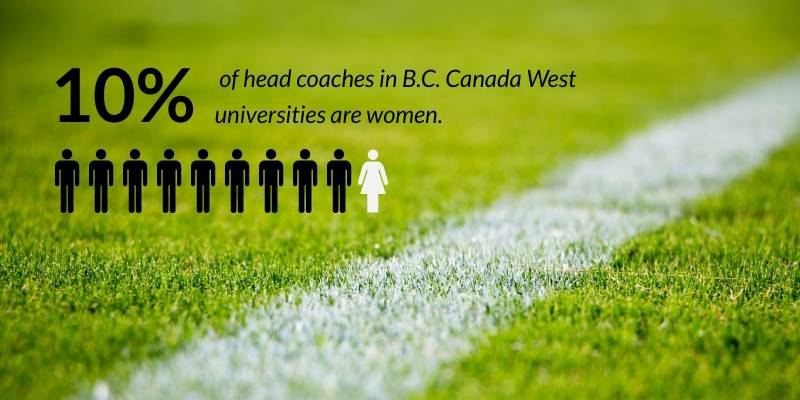 Since 1982, the National Collegiate Athletic Association has held American universities accountable for gender equity by publicizing salaries, scholarship awards and hiring ratios. Under the Title IX policy, no NCAA school is permitted to discriminate, exclude from participation or deny benefits based on sex.

Only one Canadian university is held to the same standard. All of Simon Fraser University’s sports teams have competed in the NCAA since 2011. As a result, they are the only school in B.C. with a female athletic director, and women hold four of the 12 head-coaching positions.

Huband attributes the difference to the relative size, structure, and financial power of the NCAA compared to U SPORTS. The NCAA consists of over 1,100 schools which creates far more coaching positions, while U SPORTS only has 56 participating teams.

“The sheer volume of people they need involved is incredibly different than here,” said Huband. “Each team has at least one full-time head coach, plus three full-time assistant coaches, plus grad assistants. So they have a development system right there.”

Cayer says a binding policy would force schools like UBC to close the gender gap, just as SFU did.

“It definitely will increase the number of women coaches if there is legislation in place,” said Cayer.

Beyond policy changes, there needs to be a shift in the culture of university sports. Sandhu says more players need to be actively groomed for coaching roles.

“I think the biggest thing is having our organizations support the growing and development of our athletes,” said Sandhu. “It takes more than just one person.”

Recreational use of drones can harm animals, researcher says

Drones are wonderful tools for research when in the right hands, but Dr. Lance Barrett-Lennard thinks that this new flying…

Vancouver built the $36 million Creekside Community Recreation Centre hoping it would be a hub for the new Olympic Village community….

The general consensus has been that nobody wins from the NHL’s current work stoppage. But it’s been a boon to…