Kennedy Aragon-Scriven carries an extra bag with her to school every day.

Her backpack holds her school things; the other is for a grey seat cushion.

“I call her Britta,” jokes Aragon-Scriven. “She goes with me everywhere.”

Aragon-Scriven is cheerful and engaging, quick to crack a smile and almost frighteningly articulate. The fourth-year University of British Columbia bachelor of arts student also lives with chronic pain. After an injury in high school seven years ago, she now experiences widespread pain in her back, tailbone area, legs and feet. Her cushion helps her to sit for more than 15 minutes at a time.

Of the impact on her life at UBC, she explains: “It’s like there’s this whole other dimension outside of school — it’s like having a whole extra course that I’m taking because it sucks up so much of my time.”

In December of 2018, UBC’s board of governors voted to amend Policy 73, a policy implemented in the late 1990s that determines academic accommodations for students with disabilities. The updated policy is part of a larger, university-wide effort to increase inclusivity and accessibility.

At an institution as large as UBC, working to include a variety of access needs is not a straightforward task. And for disabled individuals within such an institution, frustrations and challenges abound.

Students with disabilities face a host of issues that can complicate their learning: pain, fatigue, cognitive impairment, mobility challenges and more. Aside from managing physical limitations and needs, navigating the support systems and personal relationships that come with being in a university environment can present additional stressors — especially when the disability is invisible.

Though the university’s student society, the Alma Mater Society, does not currently collect data on disability among students, the most recent statistics  indicate that, in 2015, about four per cent of UBC students identified as having some form of disability. That number has likely grown since.

The survey also revealed that this subset of students was often less satisfied with their academic experience at UBC than students without health issues. Students noted poor communication from the university and conflicts with supervisors as sources of discontent.

Disability is a category that can encompass a range of impairments and access needs, but many forms of disability are not externally visible.

“I would say that about 55 per cent of the students we see present with a mental illness as one of the disabilities they would be seeking support for,” said Janet Mee, director of UBC’s Centre for Accessibility (formerly Access & Diversity), the university’s current home base for students seeking disability-related resources.

“Many of them will have other concurrent conditions like a learning disability, a chronic health issue or chronic pain, which usually comes with depression.”

In total, Mee estimates about 80 per cent of the 3,000 to 3,500 students registered with the centre in a given year present with a non-visible disability. She lists conditions like autism, ADD/ADHD, and traumatic brain injury in this category.

“Even things like vision loss can be invisible, unless there’s an outward sign, like if the person uses a cane or has a service animal. We have lots of students with hearing loss who would be invisible to the general community. Maybe they don’t use sign language interpreting or captioning or anything else that would identify them.”

Additional barriers for students with disabilities

Mee notes that there is still a limited understanding about what constitutes a disability — something that can cause issues for students and instructors alike.

“I think that people have a stereotype of disability, even today. They have a hard time understanding that someone who is smart and seems to be doing well academically and doesn’t have any outward signs of anything would need accommodations.”

Mee believes this can lead to students doubting themselves about whether their issues qualify as a disability and feeling hesitant to speak to professors or ask for help. She says the invisible nature of some conditions represents a “huge challenge” for many students, while continued stigma surrounding mental-health issues can present a barrier to seeking support and services.

Mee stresses that for students with visible and non-visible disabilities alike, accessibility issues can be crucial determinants to a person’s success at UBC.

“For many people, like people with chronic health [issues], the built environment — how it’s designed and how they’re able to manoeuvre in it — can be very important for managing issues of fatigue, or having access to washrooms, those kinds of things,” she says.

But for many others who are living with mental-health conditions or even chronic health [issues] that are very invisible, it is the human interaction — and the barriers created by people — that is probably the biggest problem.”

Read on to learn how three students with invisible disabilities navigate UBC.

Kennedy Aragon-Scriven, a fourth-year media-studies student, lives with chronic pain in her back, tailbone area, legs and feet. The pain stems from an injury she sustained in high school; doctors are still investigating the possibility of resulting nerve damage. One of her biggest challenges is sitting for extended periods.

“At the beginning of my first year I had not bought this cushion, and I wasn’t using it and I wasn’t receiving any sort of therapy that was really helping. So I had to stand up all the time during studying and during class and tests.”

Aragon-Scriven is always tired. Her fatigue affects her ability to focus her attention at school. Her mobility is limited by pain, and walking can often cause flare-ups. As a result, she needs to carefully plan out how she will get to class each day and how much time and energy can be spared for other tasks like grocery shopping, cooking and schoolwork.

“I have to be more detailed in planning how I am doing assignments, because if I have school all day and then I go to work, and then I come home, and then I have to make dinner, likely I’m too tired to focus and do any homework,” she said.

Aragon-Scriven’s accommodations include additional time for exams, a note-taking service, and permission to stand in lectures or leave class if she needs to. These supports have helped her manage her symptoms to a certain extent, but challenges remain. She uses the Centre for Accessibility’s new shuttle service to get to and from classes, but the service does not cover enough stops and there are certain buildings — including the student residence where she lives — that are not on the route.

“I think the issue with the accessibility shuttle is that they’re primarily considering people in wheelchairs, or visitors to campus, in designing the layout and stops,” Aragon-Scriven said. “It’s a pretty big blind spot that there are no stops at all near any of the residences on campus.”

Michelle Huang describes herself as having a “complex profile.” The friendly Taiwanese-Canadian student is enrolled part-time in undergraduate science courses at UBC. She has a learning disorder that affects how she reads written text. She also has a hearing condition called central auditory processing disorder that impacts distinction of sounds. Huang is also sensitive to sound in general (a condition called hyperacusis) and deals with mental-health issues, including post-traumatic stress disorder, depression and anxiety.

Huang has been registered with the Centre for Accessibility since she started studying at UBC and has had a mixed experience receiving support.

“Overall they were helpful, but because I have a complex profile they didn’t know how to manage […] so I did a lot of self-advocating. But at the same time I was also getting pushback for self-advocating directly with the instructor or requesting additional resources. I think they sometimes felt that I was being too demanding for services, that I should just be appreciative,” said Huang.

The process of seeking accommodations made her self-conscious. Huang consequently tried to minimize interactions with her advisor to protect her mental health.

Being an older student (Huang is 38) and only taking one or two classes per term has also influenced how she is treated, Huang believes.

“The course load that I take makes me feel, indirectly, like I’m not as important as other students who are taking a full load,” she said.

“I always wanted to do a master’s degree but, because I knew that I had difficulty with writing and reading even, though my intellectual ability was there, I never went for it. Coming back to UBC, I was hoping to work towards that goal, but I feel like, the way they treat me because of my age, they’re not taking me seriously and that makes me feel anxious about going for a master’s degree and nervous about the amount of support I would get as a master’s or even PhD student.”

Listen: Michelle discusses how her disabilities have impacted her in the classroom. 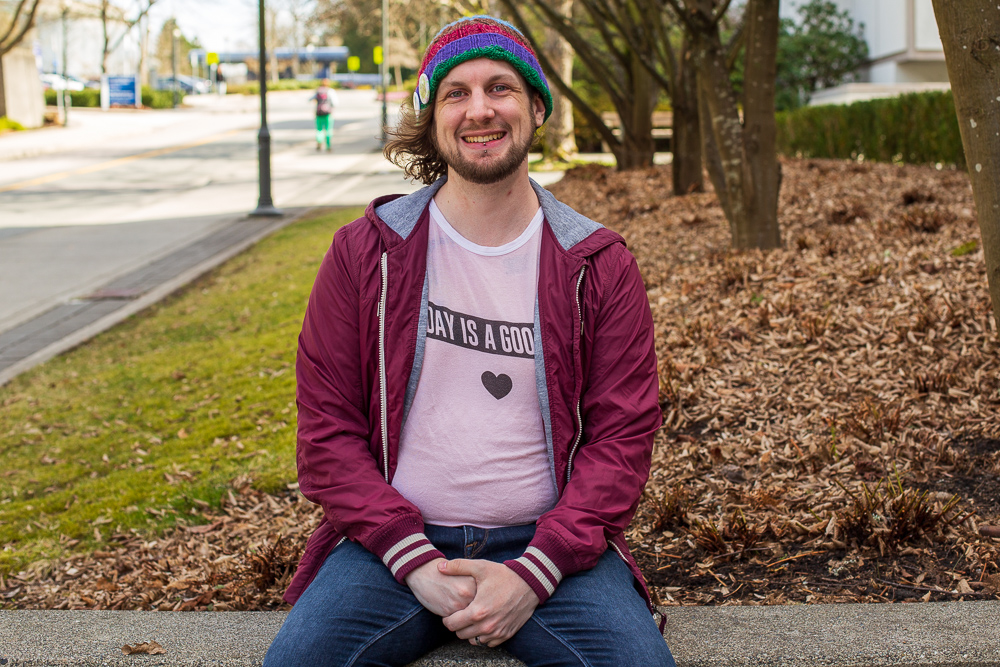 Kaurwn Bliss shows up to their interview wearing a pink T-shirt that reads “Today is a good day.” Their partner (Bliss is non-binary and uses they/them pronouns) accompanies them to help carry their backpack, which can be an additional physical strain.

Bliss holds a bachelor’s degree in engineering and is currently taking pre-requisites in order to apply for UBC’s master’s of counselling psychology program. They live with widespread soft-tissue and joint pain and mental-health issues including PTSD, depression and anxiety. They also have an eating disorder and a heart condition that impacts their cardio capacity.

Bliss is also autistic, something they don’t consider a disability, but that can sometimes cause challenges.

“It’s very possible that when I’m trying to communicate with people to get the supports that I need or to ask for a seat or something like that, I’m coming across as rude and that’s impacting the sort of response that I get.”

Bliss also lives with misophonia, which is an auditory sensitivity to select sounds that can cause accompanying emotional distress.

“[Misophonia] is correlated very strongly with autism, though it’s not the same thing. So I can’t be around people who are eating or chewing unless I have music to block them out. So it makes it hard to study in open spaces and cafes and stuff. It makes it hard to write a test if someone is chewing gum or they’ve got a crunchy snack or they’re sniffling or coughing — all of that is very distracting.”

They believe the Centre for Accessibility should offer an option for students to take tests alone, instead of in groups, as this would be more inclusive for students with specific needs.

When Anoop Singh, 36, entered the taxi business seven years ago, he was making 15 trips to and from Vancouver’s…

From agitator to legislator: Jean Swanson’s first week on council

The real cost of K-Cup convenience

Adrienne McShane considers herself to be a very lucky legal assistant. She and her colleagues no longer have to share…