Cameron Clark has been a casual summer swimmer most of his life, but wouldn’t call himself a regular. Especially not in the winter months.

But the 28-year-old Coquitlam longshoreman has taken to dunking himself in the freezing water of Buntzen Lake regularly since December. Clark said it has helped with his back pain and to stop a chronic habit of biting his fingernails.

Clark has noticed mental benefits too.

“It really helps with my mental state. When I get out, I do jumping jacks and push-ups, to get the blood flowing and warm myself up. After you’re warm again, it’s like having a shot of espresso. I have so much energy and feel good.”

Clark, 28, is part of a larger movement of people in B.C. and around the world, who have taken up this unusual activity for a variety of reasons. Some people started cold-plunging for an increase in energy, others to help heal their physical pain, and some are finding peace in the routine and enjoy the mindfulness they get from being in cold temperatures, which forces them to be present in the moment.

Clark was drawn to cold-plunging after viewing videos of Dutch extreme athlete Wim Hof online and other people participating in cold-plunge challenges on Instagram.

Alternatively known as “The Iceman,” Wim Hof has broken several cold-exposure records. He has climbed Mount Kilimanjaro in shorts, run a half marathon above the Arctic Circle barefoot, and stood in a container while covered with ice cubes for more than 112 minutes, to name a few.

Hof is also the creator of “The Wim Hof Method,” which involves breathing techniques and cold therapy that he claims provide health benefits.

Some people who have recently started dabbling in cold-exposure attribute hearing about Hof as a reason for starting, but not all.

This chilly journey is not a one-size-fits-all. There are several ways and reasons people are getting their feet wet.

While some people are doing only the occasional cold shower or taking wintery plunge in bodies of water for the associated health benefits, there is a growing number that are challenging themselves to daily cold exposure in some form.

Several local groups have formed on Instagram dedicated to cold-plunges, where people post videos of their dunks daily, along with words of encouragement and affirmations. One of the groups, “Cold Plunge Crew,” has seen a significant increase in members over the past several months.

One longtime advocate of cold-plunging said the growth in participants is partially because of the social-media effect.

“I think it’s one of those things that has that outrageous factor where you see one person do it and you go, ‘They’re crazy.’ You see two or three people do it and you go, ‘Okay, its crazy but why are so many people doing it?’,” said Julian Deschutter.

Deschutter, 32, has been cold-plunging regularly since 2017, either in an ice bath at home or in cold bodies of water around Greater Vancouver, which has helped with his chronic fatigue. He has noticed a significant increase in people trying it out around B.C. this winter. 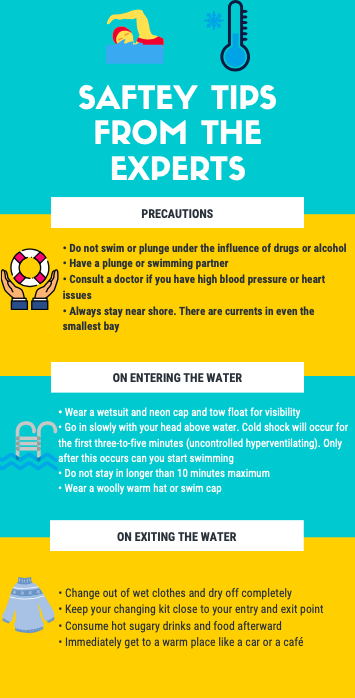 “Really, in this last year, it’s almost seemed crazy how many people are doing it. It just seems like everybody’s doing it.”

Deschutter said the increase is also partly due to COVID-19 and the lockdown measures.

“I think it is an outcome of being locked inside, just being isolated from normal routines, and the opportunity to kind of explore something that’s really good for us.”

Many participants of cold-water exposure swear by the mental and physical benefits too.

One is Natalia Anja, 33, who started experiencing seasonal depression-like symptoms a few years ago.

“A friend had recommended cold showers. I started implementing them into my daily morning routine and felt much more energized.”

Anja’s practice transitioned to the outdoors, where she and a group of friends participated in breath work, meditation and a cold swim in a creek in North Vancouver on a weekly basis.

Since March, Anja and her friends have had to pivot and move their routine to Zoom, where they continue a similar ritual signed in together online, but replaced the creek with a cold shower (in bathing suits, she adds).

The cold-plunge craze is spreading internationally

Due to online platforms such as Instagram and Facebook, the cold-plunge community has been able to grow internationally and build a body of like-minded people.

“There are so many people that are in their own cold-water exposure groups around the world. I feel really fortunate to have an opportunity to connect with some of them virtually throughout this experience. It has created the most special community of friends that have organically become some of the closest friendships I have,” said Anja.

“I got into winter swimming out of curiosity as I saw it was becoming more and more popular in the Nordics, and I made it a challenge for myself over the holidays to go everyday, after which I got completely hooked.”

Whistlerites are no strangers to colder weather, but Erin Gerhard, 27, said cold-plunging has given her more energy to snowboard and workout more regularly. She’s noticed an increase in daily dippers in her neighbourhood too.

“My dad really got into it this fall and kept egging me on to do it more consistently and that’s when I started, back in December, to make it more my daily routine.”

Gerhard credits her cold plunges with an increased sense of gratitude in her daily life.

“I have found that the more I’ve been doing the plunges the less I focus on my toes getting cold or catching my breath and I’ve been able to focus on, really, you know, slowing down and my mind focuses on the snow falling or the trees. It’s definitely helped me really disconnect from everything else and just focus on the simple things that can still bring you pleasure or gratitude. It’s a little bit addicting, I would say.”

Experts weigh in on health and safety

There are numerous testimonials of the benefits of cold-water exposure but what does the science say?

“The anecdotal evidence is growing for the beneficial impacts of cold-water immersion and there are a series of testable hypotheses established. However, the definitive studies isolating the ‘active ingredient’ associated with open water swimming remains to be determined,” said Mike Tipton, a professor of human and applied physiology at the University of Portsmouth who studies the body in extreme environments.

As cold-plunging becomes more popular and the exciting visuals of people braving the cold pop up on social media, more people will surely be tempted to rush out and try it. However, experts say there is the issue of safety to consider when exposing your body to extreme temperatures.

“Cold water can be dangerous,” said Jessi Harewicz, an ice and marathon swimmer and the safety co-ordinator at the Vancouver Open Water Swim Association.

“We have beautiful water here, with few jellyfish and things that actually harm us in the water but, like the mountains, there is always danger.”

Harewicz stresses that getting into cold-water activities is fun but requires training. “Doing my ice mile was awesome! I’m very proud I could do it locally. I loved it, but trained careful and hard for it. Go in slow, fight the urge to get excited, focusing on breath.”

Dolly Cartwright, 82, lives with her sister on a monthly pension of $1,750 that has not changed  her husband passed…

By Jesse Ferreras Transit service is not the only problem that UBC faces without a local government. The University belongs…

Alison sits in a refurbished office space in the heart of Vancouver’s Downtown Eastside, clicking away at an online workplace-safety…

A long running debate over a chunk of land in East Vancouver could be coming to a resolution. Vancouver city…

City farm gets creative to survive

Vancouver is known for its condos and urban living. But it is also home to Southlands Farm, the only family-run…