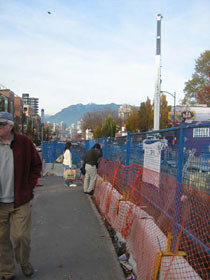 Some Vancouverites become outspoken opponents, claiming RAV construction on Cambie Street would cost taxpayers billions, and want the transit line placed instead on the Arbutus corridor, where a rail already exists.

Others are concerned about the environmental impacts and begin to protest the idea of ‘open pit’ construction.

Statistics on adverse affects on businesses:

According to a Canadian Federation of Independent Business (CFIB) survey:

74% of business owners reported decreased sales.
51% say they are working longer hours
44% have taken a pay cut
37% have laid off staff
22% have reduced business hours
14% are considering closing their business
3% of businesses have closed.

Local politicians disagree over the how the compensation bid should be handled:

More reports on the woes of Cambie merchants:

Christine Waymark and Robin Rennie have what many Vancouver couples want. They own a quaint character home in Kitsilano which…

Manitobans are responding with new ways to stay active when indoor gyms, pools and rinks are closed

Sarah Brittain chops, serves, smells what’s simmering on the stove. With a little taste from a spoon, she makes sure…