The story in the Ubyssey that showed RCMP officers playing with handcuffs and flirting with young women is not the first time that Canadian security officials have been caught in compromising pictures.

Four members of the Vancouver Police Department came under fire in January 2007 over a so-called “trophy photo” in which they posed with Martin James Weigelt, an injured prisoner who was taken out of his cell and held up by the neck for the photo. 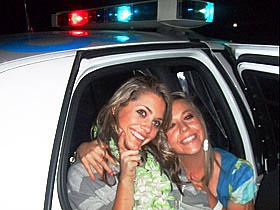 Weigelt’s lawyer Phil Rankin was quoted as saying the photo was taken after his client was assaulted by the officers and taken to prison.

The released photo blurred the faces of Weigelt and the officers, but former Police Chief Jamie Graham was quoted as saying that cuts were visible on the prisoner’s face.

Officers did “a bad thing”

Graham said the officers had done a “bad thing,” but added that Weigelt was a “career, habitual offender” who had been arrested over 100 times.

The officers are believed to have apologized to Weigelt and all but the photographer were disciplined for taking the photo.

The sergeant who directed the photograph was placed on administrative leave and later received a three-day suspension without pay. Another officer was given a one-day suspension and two others received verbal reprimands.

In early October 2007, members of the Canada Border Services Agency (CBSA) were seen in a series of photos on the social networking site Facebook that included a male officer performing what he called a “Victoria Rape”, an act that consisted of bending over a table while a friend pressed himself up behind him.

A photo believed taken in British Columbia showed a uniformed officer drinking from a keg, while other images showed CBSA recruits drinking alcohol and partying at a training centre in Rigaud, Quebec.

Legalisation of edibles set to ensure transparency and safety for consumers

The legalization of edibles with strict regulations has health officials hoping to minimize harm and educate consumers.

As COVID-19 puts a halt on much of campus life, university peer support centres provide support to students experiencing isolation.

Vancouver park board to train staff on autism spectrum disorder

The goal is to eventually create work opportunities for autistic residents

Matthew Boudreau lives on the streets of Vancouver, and has battled severe drug addictions since the age of 15. Eleven…