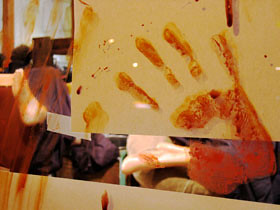 A vintage clothing store in an eclectic Vancouver neighbourhood found out that its Halloween-themed window dressing including bloodied babies and hatchet-wielding mannequins scared off more than just trick-or-treaters.

Residents complained that the display at Mintage which was inspired by the film The Texas Chainsaw Massacre, featuring bound and dismembered female display models, a Psycho-worthy wheelchair and an old-fashioned, limb-filled meat-grinder, was too much and exploited violence against women in an area where prostitution is a common concern.

Complaints flooded the Commercial Drive clothing store after its Halloween display went up on Oct. 12. Employee and co-creator of the display Daniel Ferrari, 21, was contrite and said he wasn’t trying to be sinister. “It was just in the spirit of Halloween and people didn’t get that. And then it got out of hand.”

Even area media showed up – and now CBC Television’s footage is all that’s left of the original window display. Mintage owner Skylar Stock has hung innocuous ghosts and covered the original figures in a black shroud until Halloween, when they will be revealed again for one last night.

The publicity and outcry led owner Stock to cover the scene and post a curtain of printed email comments he received in response to the display.

The emails expressed a range of feedback and stayed up until Oct. 20, with people stopping in pouring rain to read them all.

“It’s going to be a long month,” said Meredith Rokosz, 21, manager of the store, who was the main designer of the display. She and Ferrari now dread the frequent confrontation with people who, she said, “usually come in threes.”

“I still don’t feel there’s anything wrong,” said Ferrari, adding that the babies in the bag were just dolls. “They were never meant to be children.” 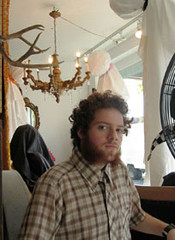 “The fact that we have like no male mannequins was one of the main reasons why it was all women,” added Ferrari.

For others, however, the display was an extreme depiction of violence against women. Veronica, 24, a passerby, was glad they took it down.

“This is a trendy store, it really popularized that whole idea of brutalizing women,” she said.

Another passerby, Mandy, 22, was more ambivalent.

“It was fascinating. I think I was with my best friend and she was like, ugh, that’s gross. It bothered me less than the one before which was just a bunch of ritzy people having a fancy cocktail party,” she said.

Others liked the original display. Jason, 33, said “I didn’t see anything wrong with it, it’s Halloween, isn’t that what Halloween’s supposed to be all about?”

Britney, 23, agreed. “It’s ridiculous how they had to cover it up. I thought it was a really well done display. It’s awesome for Halloween, and people took it way too far.

“If you’re going to get them, why not go down to Party Bazaar and get them for their female decapitations, they have limbs hanging out of freezers.” 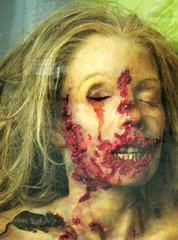 It is interesting that this window, in this artistic neighbourhood, would be singled out. Ferrari pointed out that the window of the Granville Mall Optical Ltd., at Granville and Robson Streets, “is way more violent than the one we did.”

Stuart Lawrence of Granville Mall Optical Ltd. says that they have only received one complaint this season for their display by the movie make-up and effects studio Schminken, an annual Halloween display they have had for well over 20 years.

The Mintage display, however, was the target of the outcry.

“I hope they do unveil it for Halloween,” said passerby Katie, 27. Mintage staff agree. “I miss it,” said Ferrari, “if anyone complains about the ghosts, I’m going to lose it.”

Unequal power dynamics. Sexual violence. The main couple in Netflix’s hit series Bridgerton is a fan favourite in spite of it all.

Astronomer Amro Mahmoud and his telescope return to the historic market.