Malalai Joya is an Afghan politican. She was elected to the Afghan Parliament in September 2005, and was recently suspended from her office for making critical remarks about the Afghan legislature.

For her criticism upon the Afghan government and her commitment to the enforcement of women’s rights, she received a number of death threats. So far, she survived four assassination attempts. 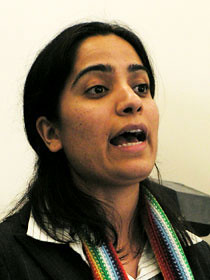 Malalai Joya is the eldest daughter of a large family. She has seven sisters and three brothers. Her father gave up his career for to fight in the Afghan Civil war. He was injured and lost part of his leg. As the situation in Afghanistan became more and more dangerous, he left the country with his family and went to Iran, than Pakistan.

Representatives from an underground campaign group, OPAWC (The Organisation for Promoting Afghan Women’s Capabilities) visit the refugee camp where 18-year-old Malalai lives with her family. Malalai joins the group and starts to teach literacy to women in Herat, a city in Western Afhanistan – a bold venture, as under the Taliban, it was strictly forbidden to educate girls beyond the age of eight. For those who broke the rules, extreme punishments were meted out.

Joya returns to Afghanistan in during the Taliban’s reign. She establishes an orphanage and health clinic, and speaks out against the Taliban regime.

Joya becomes famous by speaking out publicly, as an elected delegate to the Constitutional Loya Jirga, against the domination of warlords.

Joya is elected to the 249-seat national parliament (the Wolesa Jirga), representing her home province, Farah.

Joya claims in an Afghan television interview in Kabul that the legislature is “worse than zero”. After that, she was found guilty by the parliament of violating Article 70 of the Rules of Procedure, which forbids lawmakers to criticize one another. In consequence, she was suspended from the parliament and banned for three years.

Aging BC Hydro infrastructure will cost billions to repair

By Matthew Robinson and Tyler Harbottle BC Hydro’s plan to renew its aging hydroelectric infrastructure will cost billions of dollars,…

By Dan Haves There are more than 1,500 binners in Vancouver Vancouver’s binning community was relatively small until United We…