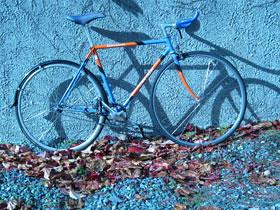 Tyler Lepore, jokingly known by friends as “the merchant of death,” is one of the many Vancouver bike shop owners at the forefront of a trend in brakeless bikes.

With just one gear and no brakes, fixed gear bikes are causing concerns over safety as their lack of a working brake is technically against the law in British Columbia.

Although Lepore and other Vancouver bike shop owners are cashing in on this trend, these brakeless bikes can be dangerous when ridden on city streets.

“If these bikes are not maintained properly you could injure yourself or worse,” said Lepore, he 27-year-old owner of Superchampion, an East-Vancouver bike shop, catering exclusively to fixed gear cycles.

B.C. Cycle Legislation states in section 183 that, “a cycle operated on a highway must be equipped with a brake that will enable the person operating that cycle to make the braked wheels skid on dry, level, and clean pavement.”

It isn’t uncommon to see fixed gear riders weaving through Vancouver traffic, skidding at lights, and balancing on their bikes while stopped.

Cities like New York, San Francisco, and Montreal are also witnessing this trend. But fixed gears have come under fire in some American cities after riders have been injured or killed while cycling.

The most recent incident was the September 7th death of Bryce Lewis, a 19-year-old fixed gear rider who was killed after being hit by a dump truck in Seattle, Washington.

Fixed to be hip

Despite the seemingly obvious danger involved in cycling without brakes, Constable Tim Fanning of the Vancouver Police Department says the police are aware of these bikes, but tend not to give fixed gear cyclists a hard time.

“Most of those people are pretty adequate riders but they can’t control the traffic around them,” said Fanning.

According to Lepore, some people aren’t ready to ride a bike with no braking mechanism. He believes cyclists should start on a bike equipped with gears and brakes and slowly work their way up to a fixed gear once they are comfortable riding in Vancouver traffic.

“Some bikes are thrown together that are completely unsafe,” said Lepore.

Lepore believes he is in a precarious situation as he is exposing this subculture to kids who may be riding a fixed gear to be hip and, as a result, don’t appreciate the dangers involved in brakeless riding.

Despite his nickname, Lepore said safety is a “huge issue” and has no problem adding a front brake if requested to do so. He says the decision, however, is ultimately up to the customer.

Many fixed gear cyclists argue that the “skid-stop” should be considered a braking mechanism. However this method of braking can be both difficult and ineffective, especially for rookie riders who aren’t used to cycling without brakes.

The Vancouver police have yet to begin handing out tickets to riders without brakes but Fanning said it could be considered if their popularity continues.

“As far as the police going out and enforcing it, it hasn’t come to that yet,” said Fanning.

“We want people to ride and a fixed gear has appeal, it’s a lot of fun, but if they have to ride in traffic, they need to have a brake,” he added.

The concept of a fixed gear bicycle is relatively simple. The rear wheel and pedals are connected through a single gear, secured to the rear wheel. Because there is no freewheel, a fixed gear cannot coast. In other words, if the wheels are moving, so are the pedals.

While some fixed gear riders choose to buy a track bike and ride it on the road, others convert old street bikes to fixed gears.

Brakeless fixed gears were never intended for commuting on busy streets but to be raced in velodromes, circular racing tracks where the use of brakes is prohibited as a safety measure to other cyclists.

Lepore, meanwhile, isn’t too fazed over his role in the brakeless bike trend.

“Who am I to judge? I can’t be the police. You can only hope people get into it for the right reasons.”

For the “merchant of death”, the right reasons are a love of biking and an appreciation for the simplicity and minimalist style of a fixed gear bike.

And that seems to be the attitude of most fixed gear aficionados. For this die-hard group, safety isn’t an issue because the fixed gear subculture is not a trendy fad but a way of life.

Roma Hall in Vancouver celebrates eight decades on May 8. The Hall was then known as Italian Mutual Aid Society…

For four weeks in October, neighbourhood children and teenagers gathered in the studio at the back of Heaventree Gallery on…

They tuck themselves away in warehouses and back alleys. They spring up in art galleries late at night. Sometimes they…

Hana Galal is on a mission. The 22-year-old university student raised more than $1,200 for charity in one night. She…