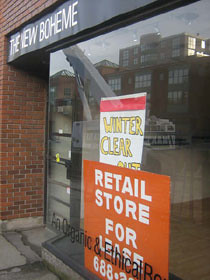 Cambie Street merchants are back in court November 7 to continue their fight for compensation for business they say they lost as a result of RAV line construction.

This will be the latest in a string of court dates to regain revenues businesses claim to have lost during above-ground transit construction of the new light rail along Cambie street.

Cambie business owners are challenging a legal stipulation that does not allow for any direct payment to compensate their financial losses.

Storefronts have turned into construction sites as Canada Line construction has gutted the
Cambie corridor. The loud equipment and traffic diversions have sent business to other areas of the city to avoid the noise and hassle.

A Canadian Federation of Independent Businesses (CFIB) survey shows 74 percent of businesses in the Cambie Street area reported serious decreases in sales and an average loss of over $111,000.

Some store owners have gone out of business, but Hazel Maternity owner Susan Heyes laid off staff, mortgaged her house and hunkered down to keep her store open.

A former leader of the Do Rav Right Coalition, which advocates on behalf of Cambie businesses, Heyes took the matter to court in 2005.

Heyes said the CFIB survey did not take into account some businesses that have gone bankrupt during construction. 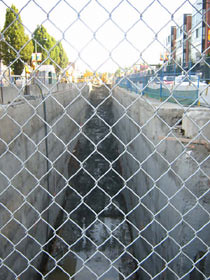 “If somebody’s already left, they won’t be around to fill out a survey.”

Alan Dever, Canada Line‘s director of communications, said the corporation supports local businesses to the extent that the law allows them.

“We put together a business support program and put in about $1.3 million in direct support and provided at least that amount in indirect support,” he said.

“We said, ‘here’s your money, no strings attached, you figure out what you want to do.’”

Dever said the business plan was implemented with “a committee of business people,” but that Canada Line “knew there was no policy that allows for anybody to be paid direct cash compensation for business loss.”

“We don’t have the right…[or] the money to pay people and there’s no law in this country that allows for something like that,” he said. “It doesn’t exist. We continue to do what we can to help out as best we can…We have done a lot for these businesses and we will continue to support them until the construction ends.”

But Heyes isn’t satisfied that any real effort was made to help business owners deal with setbacks.

She claimed the only support merchants received were packaged as “retail workshops,” in which retail consultants hired by Canada Line taught courses that aimed to show merchants how to retain business. 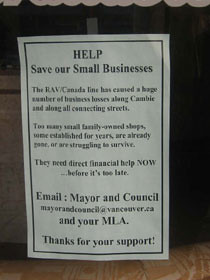 “They were completely insulting,” Heyes said. “My personal favourite was ‘greet your customers with a friendly hello.'”

Heyes said merchants are upset by a perceived lack of concern from the provincial government, and by the “bullying” from various parties.

“They’re concerned that it would set a [legal] precedent for compensation… they’re already setting the precedent. The government and mega-corporations can destroy your livelihood at will with impunity. We need to change that.”

Heyes said she felt compelled to stand up and speak out after seeing other Cambie merchants “watch their whole life savings run through their fingers.”

She pointed out that many Cambie merchants do not speak fluent English and feel that “speaking out” against the government is “totally taboo.”

“I have been watching all of this for two years now,” he said. “We were initially told construction was going to take six months maximum. Everybody was misled.”

Davidson believes the construction is only the first of many changes that will affect the Cambie corridor.

“All these buildings are going to be developed within the next five years,” he predicted.

Davidson also worried that rent increases may be used to force small business owners out of single-story buildings to make room for bigger developments.

“None of these business were given breaks on rent,” he said, “Business owners…couldn’t be expected to survive.”

Heyes’ lawyer, Cameron Ward, said Translink and the provincial government hope “to seek an order that the claims be struck out as disclosing no cause of action,” arguing there is no basis in the law for them to be in court, and have no legal obligation to compensate merchants’ losses.

According to MLA Gregor Robertson, saying that there is no basis in the law is “bending the notion of precedent.” 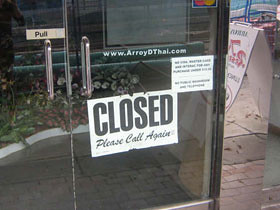 “If they have already allocated funds to mitigating an impact, then they need to be committed to address[ing] the problem,” he said. “Taylor has pushed this back from the provincial government to Translink and said it’s their responsibility, so the precedent is set.”

Robertson said no definitive policy decisions have been made.

“We’re getting a pass-the-buck from the Campbell government to Translink, back and forth…and small businesses are stuck in the middle while there’s no leadership or commitment on either side of this. It’s very frustrating for the merchants to have decision makers duck the responsibility.”

Robertson said the provincial government “has been the leading force from the beginning, so they need to take the initiative and take the lead on compensation as a funding partner.”

He added the CFIB survey results are “irrefutable.”

“It confirms…the massive impacts both personally and financially. Half the workforce has been laid off in the corridor.”

“The losses are much heavier now..the result will likely be legal action that will cost the taxpayer more than a pro-active solution would have.”

Susan Heyes is confident they will successfully challenge the legal precedent.

If the Translink and provincial government claim of no legal obligation is rejected, a trial will tentatively commence in November.

“Under all of this, we do have the law on our side, we just so far haven’t had the legal system on our side,” she said Heyes.

Related: A brief history of RAV

B.C. game developers are relieved that the provincial government is looking to renew a lucrative tax credit that was due to run…

Canadians will see more trucks on the road, will earn less abroad for their products and will lose import business…

NCIX bankruptcy both an opportunity and warning for competitors