A supported housing program in Southeast Vancouver has been hailed a success by its director and tenants, despite initial controversy. 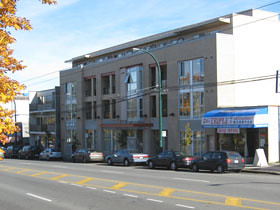 Fraser Street Concurrent Disorders Transitional Housing, run by the Triage Emergency Services and Care Society, opened its doors in August to individuals living with both mental illness and addiction. The facility, which serves as both residence and treatment centre for people with concurrent disorders, faced initial protest from community members who feared that such a facility would compromise their neighborhood’s safety.

Now, with all 30 apartments occupied, executive director Mark Smith said the facility is a success so far. He said that to be in an environment which focuses on recovery and abstinence from drugs and alcohol is “a blessing” for some residents, adding, “It’s been a tough road for a lot of them.”

“I was pretty much in dire straights,” said Barbara Brown, who has been living at the facility since it opened. After splitting the last two years of her life between supportive housing for her addiction and hospitals for her mental illness, Brown is happy to be in an environment where both disorders are dealt with.

“You can approach staff about both issues…it’s a great environment.”

She said she also gains support from fellow tenants.

“There really is an attempt to create a community here. Residents know each other and are very supportive of each other,” Brown said.

Still experimental, concurrent disorders housing has been heralded by some researchers as essential in the care and recovery of people with substance abuse and mental health issues. 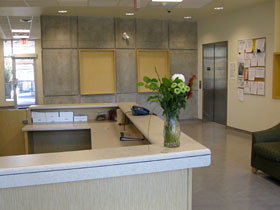 In a 2000 article entitled “Housing, Mental Illness and Substance Misuse”, John Russell, former Director of Greater Vancouver Mental Health Services, says that the best intervention for people with concurrent disorders is a model in which “staff have the expertise to provide treatment for both mental illness and substance abuse in a comprehensive, integrated model.”

The Social Planning and Research Council of BC (SPARC) published a 2006 study reporting that “there is consensus in the literature that housing is the cornerstone of care, particularly for people who are homeless and have concurrent disorders.”

Although Triage has been providing varied housing options to those in need for several years, the SPARC study reports a gap in services. Triage clients would often go to a recovery home after their detoxification from drugs or alcohol, but since these facilities were not designed for people with mental illness, “they would often be asked to leave if they displayed symptoms such as talking to themselves,” the study says.

Facilities like the one at Fraser Street are helping to fill this void.

“The zero per cent solution”

Not everyone sees supportive housing for the concurrently disordered as a positive solution.

The Fraser Street facility faced substantial community backlash in 2004 when plans for its construction began. Smith said concerns ranged from increased crime to decreased property values to parking. Many of these worries were raised during public information meetings hosted by organizers of the project. In particular, Smith said, there was a lot of fear around what types of people would be living at the facility.

“Everyone imagined their houses and cars being broken into to pay for these drug addicts’ habits,” he said.

Tim Fanning, a media spokesperson for the Vancouver Police Department (VPD) said no changes in crime rates have been detected since the facility opened.

NIABY, or “Not In Anyone’s Back Yard,” is a coalition forged by residents who strongly oppose the implementation of community-based treatment programs like Fraser Street’s. 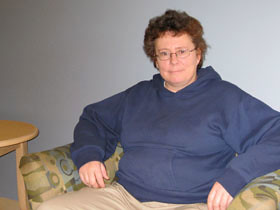 Referring to the program as “The zero per cent solution” and “a scam,” the NIABY website said “dangerously addicted people” are being moved into residential neighbourhoods with no objective measurements in place to ensure these kinds of facilities work.

On their website, NIABY said random drug tests of the Fraser Street facility’s tenants should be mandatory and the results published. They also suggest “any contact of Triage Fraser [Street] supportive housing residents with the police should be measured and publicly reported.”

A centre of stability

Smith admitted that although a couple of people have “slipped through the screening process” and have had to leave the facility, most are substance-free individuals trying to get their lives back on track.

“You wouldn’t know these people from Adam if you passed them in the street,” he added.

As for Brown, she plans to stay at Fraser Street for the full two years allotted her under the program’s rules.

“This is more stability than I’ve had in years,” she says.

Jillian Skeet was on her way back from drawing class with both of her boys buckled up in the car,…

On Courtenay Gibson’s desk sits a growing stack of applications from young Musqueam members, each vying for a free refurbished…

Kitsilano needs more social housing, and city council is changing zoning bylaws to make it happen. In a unanimous decision,…

Without government aid, some small farmers feel “pushed out”