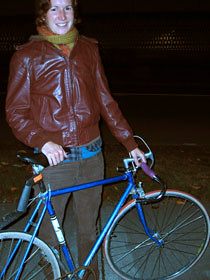 Leanne Kavanaugh, a fixed gear enthusiast and bicycle mechanic in Mount Pleasant, is aiming to transform bike shops into female-friendly spaces. Kavanaugh was frustrated with bicycle repair shops and the Vancouver bike scene in general, which she describes as, “very male and hetero dominated.”

Wanting a space that would “empower women and support their self-sufficiency,” Kavanaugh and her co-workers at Our Community Bikes (OCB) initiated Womyn on Wheels, a bicycle repair workshop geared exclusively towards women and trans-gendered people.

Kavanaugh began working at the shop only eight months ago, but has already made a lasting impression with her women-only workshops.

According to the 25-year-old, entering a bike shop can be a stressful affair for women as bike culture tends to be a male-dominated space. She says many women feel uncomfortable taking their bike in to be fixed and this workshop allows women to learn how to service and maintain their bikes themselves.

Kavanaugh feels that programs like Womyn on Wheels are important for the empowerment of women.

“They allow women into the club and change the exclusivity of it.”

The workshop has been well received and Kavanaugh is happy with its success. For her, a bicycle is an agent that can empower a woman, making her feel strong and independent.

Womyn on Wheels has been running every fourth Monday since June and hosts around six to eight women per class. The workshop costs $5 to $10 an hour and usually runs for a three-hour period.

When Cora Maming first moved to Vancouver in 2008, she spent most of her days alone.  The 68-year-old spoke little…

A new face for Musqueam politics

Every two years, the Musqueam First Nation in southwest Vancouver elects a 10-member council and, at its head, a chief….

Not all dance is made for a stage. That’s why a group of contemporary dance artists created alternative performances for Dance…