Local artists and animal lovers are coming together this week to raise money for abandoned animals in British Columbia.

The 2007 Artists for Animals Art Auction is being held on Sunday, Oct. 28 by the Kensington Foundation for Animals in Crisis with proceeds going to B.C. animal rescue groups. Over 185 artworks donated by local artists will be available for bidding.

Debbie Bolton, Secretary-Treasurer for the Kensington Foundation, said the contributing artists all currently live and work in B.C.

“The artists are a mix of people from everywhere but they’ve all landed here and they’re animal lovers and when we ask them for a donation, they say they’re in.”

Ironside, who will have three paintings up for auction, said many artists prefer to donate their work to this event rather than older and more established auctions because they are pet owners and feel strongly about animal rescue.

“Spraying people’s fur coats with paint, that’s not what these groups are about,” she said. “We’re here to help these animal rescue organizations do their daily jobs, providing sick, injured and abandoned animals with food, vet care, and shots.” 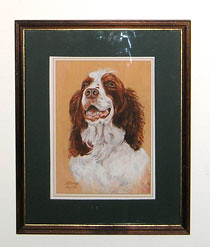 Ironside also noted that the auction is a great chance for both serious art collectors and novice buyers to find amazing bargains. As she surveyed the gallery, she said, “There are a lot of deals to be had here.”

She pointed to a painting by sought after Vancouver artist Eve Leader. It could very well be picked up for only a fraction of its actual value on Sunday night, she said. Leader’s paintings normally sell for thousands of dollars.

Ironside said Leader is happy to contribute her work because she’s a loving pet owner. “Eve has two cats that she’s just crazy about.”

Ivanicki donated two paintings to last year’s auction, both valued at around $550. One of them sold for only $100. This did not deter her from donating two more pieces this year. “Many of the pieces sell for lower than their value but it’s something I can give to the animals and that’s the important thing.”

The Kensington Foundation was first established in 2004 in order to raise funds for registered animal rescue charities in B.C. Bolton said these groups are often burdened with heavy medical expenses because they all operate under a no-kill policy.

“Other than dire consequences, they are out to save animals. If it’s just broken bones or manageable illnesses, they give them medications, they figure out how these situations can be dealt with. The last thing they want to do is put animals down.”

The Kensington Foundation will distribute the proceeds from the auction among twenty rescue groups. Most of them provide veterinary care for abandoned cats and dogs in the Lower Mainland and try to find them new homes. Some also deal with feral cats and feline overpopulation. A few of the groups even help less conventional pets such as rabbits, ferrets and pot-bellied pigs.

Big Heart Rescue provides abandoned cats and dogs in isolated First Nations communities with medical and adoption services. Gail Moerkerken, a volunteer for the organization, said the funds they receive from the Kensington Foundation go directly to vet costs. “We really appreciate all the support they’ve given us,” she said.

This is the second art auction to be put on by the Kensington Foundation. Their first, held last year, raised almost $10, 000. Bolton said the idea of holding an art auction came after two years of unsuccessful fundraising.

Bolton hopes to raise even more money this year.

“Last year we had no idea what was going to happen. Obviously we did very well and ten thousand dollars helped a lot of animals but of course this year we want to do better.”

In addition to paintings, potential buyers will be able to bid on sculptures, prints, photographs and jewelry.

Artworks are available for viewing at the Autumn Brook Gallery on 4th Avenue at the entrance to Granville Island, just off Fir Street. Actual bidding will take place on Oct. 28 beginning with a silent auction at 5 p.m. followed by a live auction at 7 p.m.

A Vancouver-based dance class for refugee children is offering daycare and connection for families recently arrived in the country. The…

The York Theatre, one of Vancouver’s oldest venues, is about to reopen – bucking a recent trend of closures and…

Haunt of Edgemont brings community together through scares and screams