Recently imposed U.S. sanctions on Iran are taking an economic and emotional toll on Iranian university students in Canada.

UBC student Morteza Mousavi said his family has been under enormous stress as the value of Iranian currency changes from day to day, the result of U.S. President Donald Trump’s decision earlier this month to reimpose sanctions targeting Iranian banks, oil companies, and other important industries, like automobile manufacturing.

“It’s a huge amount of pressure on my parents because they go to sleep, wake up the next day, and then all the money they had saved for like 20 years is gone,” said Mousavi.

At its lowest, the rial dropped more than 50 per cent of its value compared to the Canadian dollar between January 2016 and November 2018.

This devaluation means everything, from food to rent to tuition, is much more expensive for Iranian students in Canada.

Mousavi, who is Canadian-Iranian, lives with his family in Vancouver. He pays his own tuition through scholarships, loans, and a part-time job. But his parents’ assets are tied to the rial and he said things become especially stressful when it comes to figuring out when to make an exchange.

Last week, his parents converted the small monthly income they still get from Iran into Canadian dollars. The very next day the value of the rial increased, so they lost out on the chance to get more dollars for their money. That was devastating for his parents and Mousavi ended up trying to console them.

“I just tried to talk them through it,” said Mousavi. “The only thing they could think of is that if they had only waited for like 12 hours then it would have made a bit of a difference.”

Mousavi said the situation has impacted his life decisions as well. He recently tried moving out of his family’s home but, after three months, decided to move back.

“I know that at some point I should become independent, but at this time I don’t want to add to their stress,” Mousavi said.

UBC student Omit Hajieghrary also faces financial and emotional challenges due to the instability of the rial.

Hajieghrary is an Iranian citizen who left his family and friends back home to pursue a master’s in engineering. He said he was hoping to visit his parents during the summer break next year, but it costs around $2,000 to buy a round-trip plane ticket.

Before the drop of the rial, Hajieghrary said his parents would have been able to afford the plane ticket, but now he’ll only be able to visit home if he can save that money himself.

“A TA earns about $2,000 for each course per semester, so about half of my family’s annual income is equal to a TA’s salary here,” he said. 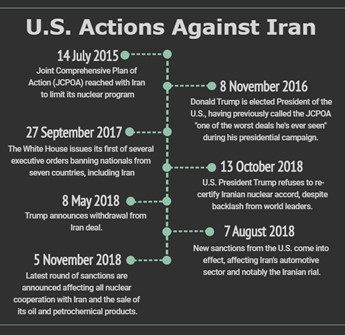 Sanctions among the most punitive in history

The angst these students are going through is the result of a round of sanctions that one former Canadian ambassador says are among the most punitive the U.S. has ever levelled against Iran.

“[The Trump administration] believes that these sanctions will bring the Iranians to their knees and renegotiate the nuclear accord,” said Jeremy Kinsman.

“But sanctions generally don’t influence behaviour, and I don’t think they will change Iran’s attitude towards renegotiation.”

The sanctions have produced a considerable change in the value of Iranian currency, though, and will start to impact Canadian universities, says a Canadian expert on Iran.

“The Iranian rial has lost more than half of its value since sanctions were imposed, which means skyrocketing inflation because now people have to spend more money to purchase foreign products,” said Nader Hashemi, director of the Center for Middle East Studies at the University of Denver.

He said as the real cost for an Iranian to attend schools like UBC increases, fewer students will be able to afford studying abroad.

“I think this will obviously be a significant loss to Canadian universities, who would benefit from generally very good students that come from Iran and contribute to their universities.”

It’s all the Iranian community can talk about

Back on campus at UBC, Morteza Mousavi said the value of the rial is all most Iranian families can talk about these days.

“I’ve been trying to avoid family gatherings. You can take it to some extent, but it just goes on and on and on,” he said. “Everyone to some extent is affected by it.”

UBC student Mitra Mirshafie said the rial dominates conversations with her friends and family too, but not with non-Iranians in Vancouver.

“I don’t know if people really know about what is happening, how it’s affecting our country.”

“The main challenge they face is housing,” said Ali Haidar, co-founder and director of Ajyal

By Anupreet Sandhu Bhamra There has been renewed interest in the Gur Sikh temple, Abbotsford, following recognition as a National…

Art not ads for Vancouver billboard