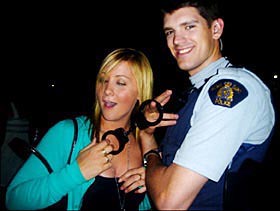 Two RCMP officers who were photographed flirting with young women have avoided serious punishment after an internal investigation into their conduct by the University of British Columbia (UBC) detachment.

Constables Scott Grabarczyk and Ben Savard were reviewed by the commander of the RCMP’s UBC detachment for on-duty conduct last July that included putting 19- and 20-year-old women in handcuffs for a series of “playful” photos printed in UBC’s student newspaper.

The women were also photographed sitting in the back of the officers’ squad car, while witnesses said the police let them play with a nightstick. The photos were taken after the officers approached a group that was drinking at a UBC bus stop.

“No code of conduct breaches”

Staff Sergeant Kevin Kenna, who conducted the review, said he gave the two officers “operational guidance” for their conduct.

“We sit down, go over any policy or regulations and ensure that the members understand what they do in a particular situation,” he said. “There was no breach, no code of conduct breaches that I could determine.”

Robin Race, a UBC student who witnessed the event, was approached for questioning by RCMP during the review. 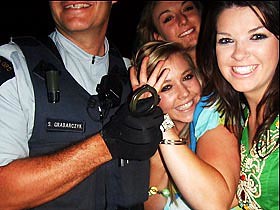 “[The RCMP] said, we have to do something about this because now it’s in the public eye,” he said. “They asked me if I wanted to make a formal complaint, but I said no because they didn’t do anything criminal.”

Section 37 of Canada’s RCMP Act says that every member of the police must act at all times in a “respectful, courteous and honourable manner” and maintain the “honour of the Force and its principles and purposes.”

Any RCMP officer who contravenes the organization’s code of conduct can be subject to review and disciplinary actions that include counseling, special training, transfer or reprimand.

Disciplinary action ultimately rests with the member in command of an RCMP detachment.

Kenna did not confirm whether the “operational guidance” could be considered a reprimand and said that such an action is reserved for more serious situations.

“For lack of a better word it could be a reprimand,” he said. “We call it operational guidance, I don’t know if you could weight the two of them.”

Kenna said no complaints had been registered with the RCMP after the story was published and that public reaction had been supportive of the officers. 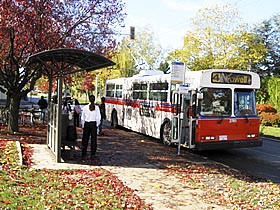 The story gained significant media attention, quickly gathering a large volume of comments on the Ubyssey website. The CBC story about the photos remained one of the most e-mailed stories on its British Columbia website 13 days after its publication.

Student and community feedback on the Ubyssey website indicates that many were amused by the photos, with some remarking that they were good fodder for RCMP public relations, while others said they would reinforce perceived tensions between students and police.

Many responses to the photos on CBC’s website also supported the police, with some calling the incident “just a harmless bit of fun,” while others said the officers’ behaviour was “unacceptable.”

Brian Sullivan, UBC’s vice-president, students, said through a spokesperson the RCMP took the conduct of its officers “very seriously” and was satisfied with how the photo issue had been handled.

Related: “A history of compromising photos”

Artists “pushed out” of building meant to provide a permanent home

Is Love Blind? A new reality dating show says yes, but the science isn’t so clear

Two scientists and a poet on love, attraction and reality TV

Vancouver’s settlement agencies have a robust system that can absorb the nearly 3,000 Syrian refugees expected to arrive in B.C….

No Disneyland: Critically ill kids change their Make-a-Wish lists because of COVID-19