St Paul’s Anglican Church is an unassuming community church in Vancouver’s West End with a loyal congregation, some of whom have been coming for more than 30 years. 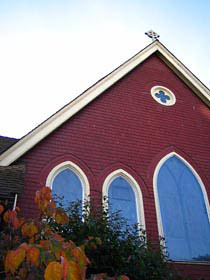 There are three sermons every Sunday, and a homemade poster stands outside the door advertising a free children’s party this weekend.

And once in a while, it hangs a rainbow flag.

St Paul’s is one of Canada’s Anglican pioneering parishes that supports the inclusion of sexual minorities in the church, an issue that is at the heart of a heated debate among Anglicans.

Passionate supporters have encouraged institutional changes on an international scale that fervent traditionalists refuse to accept. The faith’s uncertain stance on sexuality, and more specifically the blessing of same-sex unions, is resulting in crisis talks worldwide and many fear this will be the final blow for the Anglican Church.

St Paul’s has positioned itself at the front-line of the controversy since the start. The Davie Village church is one of eight parishes in the country that continue to carry out same-sex blessings – though it may be forced to stop.

“When you have people in the congregation who have been faithful together for the past 20 or 30 years and whose relationship has blessed the community, the question then becomes how can this not be blessed by God?” asks the Reverend Markus Dünzkofer, the church’s openly gay rector.

“Having seen the Spirit’s movement in that, I can’t deny it. Saying anything else would be for me like spitting in God’s face.”

Same-sex blessings in the Anglican churches across Canada have caused major rifts since the late 1990s, when the Diocese of New Westminster was first presented with requests from B.C. parishes, starting with St Paul’s. It took three different voting sessions – each with pro-blessing turnouts – for New Westminster Bishop Michael Ingham to finally agree in 2002 to allow parishes the individual choice of performing the controversial blessings or refraining from them.

The General Synod, Canada’s governing entity for the Anglican Church, voted to ban the practice. This left the Diocese of New Westminster, which overlooks all Anglican churches in Vancouver, in a strange position.

“We do not believe that blessing something and doing a rite for a blessing is a central doctrinal issue,” says Dünzkofer. “But we haven’t quite discerned what that ruling means for our situation here in [the Diocese of] New Westminster, as in whether we need to go back now or can continue doing what we’re doing.”

“One guy stood up – a long time member of St Paul’s – and he in all honesty said that he could not go along with this vote. But he didn’t leave. He stayed on as a parishioner and it was okay.”

95-year old parishioner Barbara Buckley, who was baptized at St Paul’s, is more than familiar with the parish loyalty St Paul’s has seen.

“There are all kinds of people in this world and once you start excluding, that’s when it starts to break things up.”

The position at St. Paul’s is by no means unanimous throughout the country.

Reverend George Sinclair of Ottawa’s St. Alban the Martyr Church withdrew from paying taxes to his diocese in protest at pro-gay developments.

“We are saying we are smarter than Jesus,” he said, quoted by the CanWest News Service. “We are saying Jesus was wrong and we are right.”

The Risk of a Split

Now the Dioceses of Ottawa and Montreal are following in New Westminster’s footsteps, discussing the issue earlier this month, which will be brought up once more at the General Synod in 2010, and at the 2008 Lambeth Conference, an Anglican international conference organized every 10 years.

Eight parishes left the Diocese of New Westminster soon after 2002’s decision in protest. A moratorium responding to unrest a year and a half ago put further applications from other parishes on standby.

Some pro-gay Canadian clergy say they will perform the blessings whether or not the practice is finally approved. Others say they will not perform any blessings at all if the requests are rejected, including heterosexual marriage ceremonies.

Despite the recently called for ‘Anglican Covenant,’ a controversial plan expected to restore bonds among Anglican institutions worldwide, the threat of deeper divides within the church intensifies.

“I think there’s going to be a split,” says Dünzkofer. “But I think if it’s going to happen, it’s going to be different than everybody expects it to be. There are people who are strongly opposed to same-sex unions but who do not want to split from the church. If we split over this, I think we’ll be making a mess. We’ll be ridiculing our own mission.”

“We’ve been working at trying to get the policy implemented for years,” said Aaron Hill

Mental-health society works to have Kits accept its residents

A mental-health group is determined its newest and largest-ever housing complex will be accepted into the Kitsilano community, despite continuous…

Preparing for British Columbia’s “Big One”

The record-breaking Japanese earthquake and subsequent devastating tsunami of March 11, 2011, sent a shockwave of sorrow around the world….