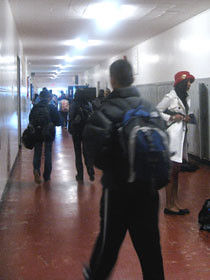 The Institute’s school report cards take into account academic indicators including provincial exam marks and graduation rates and are published annually as a guide for school-shopping parents.

John Oliver Secondary consistently places last. Moore criticized the ratings for an academic focus that fails to value the achievements of students who excel in areas like trades.

Moore is not alone. The BC Teacher’s Federation (BCTF) has voiced similar concerns. The report relies on a narrow measure that “ranks schools inappropriately,” said Susan Lambert, first vice president of the BCTF.

The rankings only serve to criticize “schools that are struggling to mitigate the social and economic conditions in which they find themselves,” said Lambert.

Peter Cowley is co-author of the Fraser Institute BC secondary and elementary school reports. He said that the very groups critical of his study bear a responsibility to provide the information they think is missing.

“They say it doesn’t show a big picture…of course it doesn’t.” Neither, he said, do alternative reports like George Bluman’s.

The Fraser Institute report doesn’t look at how students perform after high school graduation. That presents an “unfair comparison,” said Bluman, because schools with a greater percentage of students in academic programs “are automatically favoured.”

‘We’re seeing a potential shift in travel behaviour unlike anything we’ve seen before,’ says transit official.

Drone-led reforestation is slowly gaining traction here in B.C. But it’s not clear how effective such a tactic can be

By Jesse Ferreras Transit service is not the only problem that UBC faces without a local government. The University belongs…