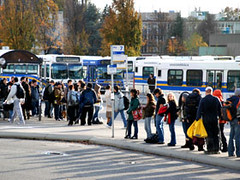 Residents of West Point Grey are angry over expansion of diesel bus service to the University of B.C. (UBC), claiming noise and air pollution are degrading the livability of their community.

“The reliance on diesel buses just makes everyone here in this neighbourhood wish that we had the cars back on the road,” said Guy Cross, co-ordinator of the West 4th Community Association.

Controversy over bus service to UBC surfaced after the introduction of the U-Pass Program – a mandatory program for students, which provides universal access to TransLink public transit services throughout Metro Vancouver. The program was adopted by UBC and Simon Fraser University in September of 2003.

With the introduction of the U-Pass, bus ridership to UBC increased dramatically. An 18 month U-Pass Review reported a 68 per cent increase after the first two years and an expected 10 per cent increase per year for the next three years.

To compensate, TransLink boosted the number of diesel buses servicing UBC along the Broadway and West 4th Ave. corridors. In 2006 TransLink further expanded their diesel bus service by creating the 84 UBC/VCC-Clark Station route which also runs along the West 4th corridor.

Another community group, the North Point Grey Homeowners Association, and the City of Vancouver Transportation Engineers are also aligned against the diesel bus service.

“We have a long standing policy of favouring electric over diesel, not only because of greenhouse gases but also livability… [diesels] are not very nice to live next to,” said Lon L LaClaire, a city engineer in the Strategic Transportation Planning department.

The City of Vancouver may also put pressure on TransLink to change their service depending on the results of a Community Visions Program it is conducting in West Point Grey. Among the initiatives proposed by residents are reductions in TransLink’s diesel bus service to UBC. 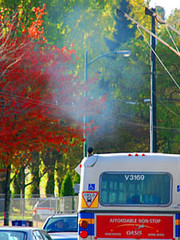 Of particular concern is the level of noise generated by the diesel engines.

Cross also highlighted a 1997 report by the City of Vancouver Urban Noise Taskforce which reads, “The reductions in noise to be anticipated with reductions in traffic volume would be most welcome, provided the gains are not cancelled by an increase in the noise of vehicles for public transit.”

In a 2007 letter to Cross, former TransLink Vice President of Planning, Glen Leicester, conceded that the diesel buses were “unexpectedly” noisy and “penetrating,” but that TransLink was working to solve the problem.

“In response to the noise levels of these particular buses, subsequent orders have featured a different, quieter engine and other noise abatement measures,” Leicester wrote. “TransLink’s 2007 diesel bus order [for 126 new buses] went to NovaBus who will deliver a vehicle that is 5-6 [decibels] quieter.”

Another significant concern to residents is the effects of diesel emissions on air quality.

Robert Paddon, TransLink Vice President of Corporate and Public Affairs again described the new NovaBuses as a progressive solution to the problem. 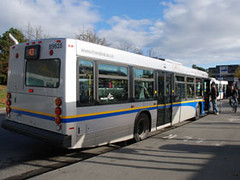 Referring to them as “clean diesels,” Paddon said the new buses burn 80 per cent cleaner than the old vehicles, run more efficiently, and use only low sulphur fuel. They are fitted with fine particulate traps on the exhaust, and are “almost comparable to compressed gas buses.”

Paddon also emphasized that TransLink sees the trade off between a relatively small increase in diesel bus traffic for a relatively large decrease in automobile traffic as beneficial for ambient air quality.

“We believe the net benefit is what’s significant,” he said.

Still, the idea of clean diesels is difficult for some residents to swallow.

In the opinion of Frank Tyers, a physician and resident of Point Grey, “Clean diesel is clearly an oxymoron… diesel buses now may be less dirty then they were a while ago, but I can tell you if you breathe a lot of diesel fumes you’re more at risk of heart attacks and stroke.”

Paddon appreciates that it will take some effort before public opinion about diesel buses changes, adding that TransLink hopes to convert the whole fleet to biofuels – a fuel derived from organic matter – in 2008.

Related: What do you think of the diesel bus service?

A brief history of RAV

Police will rely on older tests to check drivers for cannabis