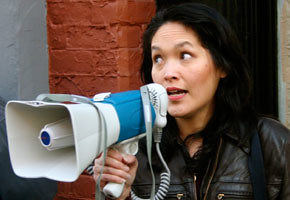 As rent increases in the Downtown Eastside and Single Room Occupancy (SRO) buildings are converted into condos and boutique hotels, many housing advocates blame Vancouver’s selection as host city for the 2010 Olympic Winter Games.

“It is clear to us and to the community that these conversions are a component piece of the development pressure related to the Olympics,” said Jenny Kwan, MLA for Vancouver-Mount Pleasant.

Over 700 units of low-income housing have been lost since the announcement of the 2010 Olympic games and 660 more could be gone by the time the games begin, according to a study by the Inner City Inclusive Committee, a City of Vancouver initiative.

While new units of social housing have been created in response, housing advocates worry that these will not be sufficient to stem a growing tide of homelessness in Vancouver. Many veteran housing advocates see echoes of the housing crisis that preceded Expo ’86 in the current situation.

Kim Kerr, director of the Downtown Eastside Residents Association (DERA) said, “We saw the first big wave of hotel conversions in the years before Expo ’86, now since the Olympics were announced we’ve seen another huge jump in conversions.”

Jim Green, co-founder of Vision Vancouver and former mayoral candidate, was an organizer with DERA in the 1980’s. He sees many similarities to the housing shortages that happened before Expo ’86 but sees some hope in the current situation given new attitudes within the provincial government.

“The premier openly referred to the evictions as ‘slum clearance.’ Things are different now, we have legislation to protect vulnerable people and society is aware of the problem,” said Green. “The government nev 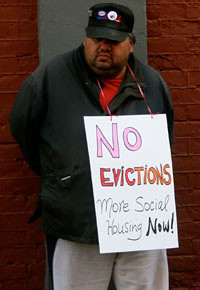 er would have bought ten hotels for social housing in the 80’s.”

However, Green is wary of policy makers’ willingness to make substantive changes before 2010.

“The city should be aggressively saying ‘we are not going to allow this kind of situation’, and the province should do the same, and so should VANOC, but unfortunately none of them are,” he said.

Instead, advocates accuse the municipal and provincial governments of promoting temporary solutions such as shelters over long-term solutions to inadequate social housing.

“The government has promoted shelters, but shelters are not homes. Sweeping people under the carpet for 2010 is not good enough,” said Kwan.

Sue, 57, a resident of an East Hastings SRO, shares this pessimistic outlook towards the government’s strategy. “They’re gonna pick them (the homeless) all up before the Olympics, house them for a while and then let them free afterwards when the world ain’t here anymore.”

Funding to assess impact of support program for aboriginal inmates

Brian Lang is no longer the warden of Ferndale penitentiary, but he still drives up to it regularly. When he…

The cost of building a laneway house

Building a laneway house can be expensive. The costs vary depending on the size of the new building and its…