Moguls skiing is an exciting spectator sport. There are many different elements to the competition, and having the fastest time does not ensure that an athlete will win. The competition consists of skiers racing down a 29-degree incline and launching themselves off two jumps on the way down the hill. 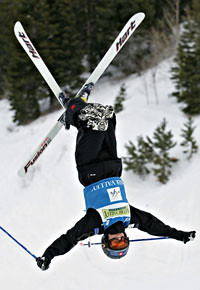 Back double full: The skier is upside down but the body is straight with two spins. The two spins are done upside down.

Corked spin: An off-axis spin; where the body is virtually horizontal, but the skier’s feet do not go above their head.

Degree of Difficulty (DD): DD is based on someone launching oneself off a jump.

D-spins: A sideways 360-degree back flip.

Flat spins: The body is completely horizontal, but the axis of rotation is vertical.

Grabs: During the trick, the athlete reaches and grabs one part of their ski.

Turns: The technical criteria evaluated in judging; refers to the completion of turning in the mogul.

– with files from the Canadian Freestyle Ski Association

Sheereen Aminuddin has five brothers, all of whom play soccer. For years, she sat on the sidelines and watched their…

UBC official says plans for 2021 football season in the works

[fve]http://vimeo.com/86745995[/fve] Tyler Mosher shattered his back snowboarding in Whistler 14 years ago. He was told he would live in a…