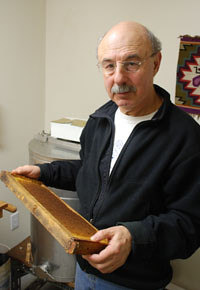 Kitsilano resident Allen Garr and his honey bees are no longer outlaws in the City of Vancouver.

Garr was one of at least 30 Vancouverites illegally keeping bees on their property before city council decided to legalize the hobby in October. The decision has brought relief and a renewed sense of optimism to their small community, even though beekeepers were never actively persecuted by the city.

“We can encourage other people to keep bees around the city and we can be open about it. We’re out of the closet,” said Garr.

Allen Garr on the life of a beekeeper: [audio:http://www.thethunderbird.ca/html/wp-content/themes/revolution_news-20/audio/bees.mp3]

It is a bit of a mystery why domestic apiculture, or beekeeping, was prohibited in the first place. Officially, a 1970s health bylaw excluded agricultural activities such as apiculture from the city centre. The aim was to control the spread of disease through livestock and bees were considered alongside horses, cows, poultry, and swine as a threat to urban hygiene.

The bylaw may have discouraged some, but beekeeping persisted in the city. Beekeepers discovered that the bylaw would only be enforced if somebody complained. As long as they kept a low profile, beekeepers rarely ran into trouble.

Garr, who has been at it for 15 years, learned to avoid surprise visits from the police by appeasing his neighbours.

“I give the neighbours honey,” he said.

It wasn’t until 2003, after Vancouver City Council approved a Food Policy, that beekeepers sensed any opportunity for change. The Food Policy brought initiatives to develop sustainable food production and distribution within the city, and it renewed agriculture through urban gardening.

The return of agriculture prompted some beekeepers to approach City Hall with hopes of lifting the ban on bees. Among them was Pete Jackson, a representative of the BC Honey Producers Association. 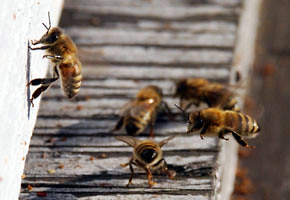 “With the push towards everything being green and ‘plants are nice,’ we brought [beekeeping] up, and the city had an ear for us and actually did something about it,” he said.

Once the issue of beekeeping was raised, members of the Food Policy team began working with local beekeepers and provincial apiarists to overturn the ban. Food Policy coordinator Devorah Kahn recalled how easy it was to gain approval.

“[City staff] saw the good and the genuineness of the people who were keeping bees and thought this was something worth supporting,” she said.

The benefits of beehives

For all the charm of the beekeepers, it was the bees who made the most persuasive case. Honey bees spend a lot of their time foraging among flowers for nectar and pollen. When they travel from plant to plant, they inadvertently distribute pollen and fertilize plants over a large area.

As one of the world’s best pollinators, bees help promote plant biodiversity and food production.

For urban gardens, a beehive can make a great neighbour, and as Garr pointed out, if ecological benefits don’t interest you, there is always the honey. 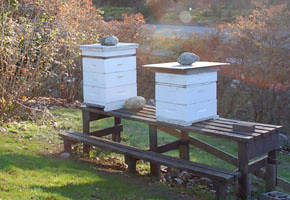 Now that Vancouver has decided to legalize beekeeping, Richmond may soon follow suit. According to Garr, who is president of the Richmond Beekeepers Association, Richmond city council will lift the ban next year.

Despite all the recent attention and admiration for beekeeping, Garr says it is unlikely to incite a sudden beekeeping craze.

“I think there will be a slow increase in the number of colonies, but its hard work and with all the diseases around, its increasingly difficult. There’s not going to be an explosion of beehives,” he said.

Most municipalities in Metro Vancouver as well as many other cities in North America and Europe already allow beekeeping.

To learn more about bees or hobby beekeeping, there are demonstration hives open to the public at Science World, the VanDusen Botanical Gardens and the UBC Botanical Gardens, or see the BC Ministry of Agriculture and Lands apiculture website.

Cases of fraud in honey imports could spike, expert warns

Canada’s honey market is buzzing, but is it in trouble?

Today the world awaits Obama’s formal swearing in as the President of the United States. There has been extensive media…

Gifted students may find support in new school board

A dish best served cold: a recap of rape and revenge in film

You can trace the origin of the rape revenge sub-genre from the late 1960’s, when horror films began to depart from the…