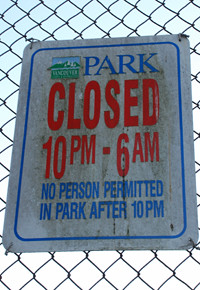 Sylvain Gagnon, 48, fears the police will come every night and move him to another place.

“There are not enough shelters,” he said. Those who can’t find refuge sleep in vacant buildings, on the street, or in city parks he said.

According to city and park by-laws, fines can range from $50-2000 for sleeping outside or unlawfully using public space. Threat of fine or hassle keeps people like Gagnon moving on.

There are approximately 750 shelter beds serving Vancouver’s 2000 plus homeless.

Despite the by-laws being on the books, police say they are rarely enforced.

“Our members [police] are very sensitive to the lack of available housing in the City of Vancouver and they would most likely try to assist a person in obtaining at least temporary shelter,” said Sergeant Malcolm Cox of the Vancouver Diversity Policing Unit. “The enforcement option is usually the very last step.”

“We have no legal authority to take someone into custody for sleeping in a park,” he added.

“You only get an injunction where you have a serious situation where the park is no longer able to be used by the public,” Courtney said. 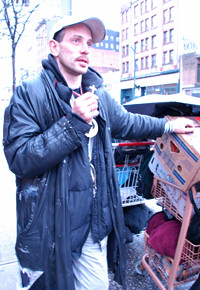 The by-laws apply to public space, including 950 Main St., where a tent city was erected this past October.

“You don’t get fined for sleeping in a park, you get arrested for obstructing justice if you don’t leave,” he said. Obstruction is a criminal charge and is not booked as a by-law violation.

“We would probably talk our face blue before arresting you for that,” Chow added.

Lawrence Brooks, who has more than once been homeless in Vancouver, said he has had many altercations with police.

“They can take their by-laws and cram them ‘cause where else are you going to sleep, you just keep coming back,” he said. “A lot of the police now are realizing that they gotta’ work with us and that if we be respectful to them, [they’ll] be respectful back.”

Pivot Legal Society wants to see the rules changed. They are building a case against the City Land Regulation By-law and the Parks Control By-law. They have been collecting affidavits since October.

“We are challenging the City of Vancouver by-laws against setting up shelter either on streets or in parks to protect yourself from the elements even though there are insufficient shelter spaces,” said Pivot lawyer David Eby. 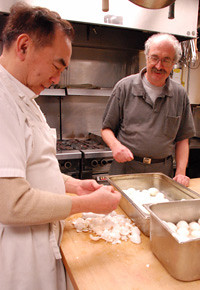 “If the city is not able to find a space for you, you should be able to set up shelter for yourself.”

If the case is successful, fear of eviction from public property is at least one thing that Gagnon and Brooks won’t have to worry about.

The action is based on a similar challenge in Victoria.

“I am going to watch that one with interest,” said Al Mitchell, Emergency Services Manager at Lookout Emergency Aid society. His shelter turns away over 100 people a month, he said.

“You can’t legislate poverty out of existence, you have to actually solve the problems,” he added. “If you have no place to go, where do you go?”

Many reasons, many answers

“It’s unfortunate that these activities are manifesting themselves on the streets of Vancouver because we are not the enemy,” said Vancouver City Councillor Kim Capri in an interview this past October, “there is no enemy in this.”

Capri said Vancouver is leading the way compared to other cities combating homelessness, but can only do so much. Services available in Vancouver attract people unable to access similar services in their own communities she said.

Judy Graves, Coordinator for the Tenant Assistance Program for the City of Vancouver, said she understands the basics of Pivot’s argument, but insists “the solution is housing, the solution is not leaving people outside.”

“I wish Pivot was using their advocacy to get housing built,” she added.

Dwayne Koe, who has filed an affidavit for the Pivot case, said he was fed up being “criminalized” for being homeless.

“You gotta’ do what you have to do,” Koe said. “Either its crime, panhandling or being homeless.”

The case is expected before the courts early next year.

Related: One of 2000 stories of homelessness

Val Stewart’s 500 sq ft apartment is a testament to her life. The cozy space is filled with overstuffed furniture…

The rate of crimes committed against people on transit increased by 81 per cent during the pandemic.

Small community programs in Vancouver have been told that their funding is safe for now, even though the foundation that…