Point Grey resident Lori Kemp knows firsthand the problem of crossing sidewalks during roadside construction. She nearly toppled over a 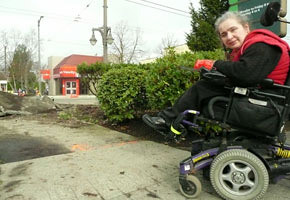 temporary construction ramp on West Broadway between Larch and Alma.

The city of Vancouver began the West Broadway Street Renewal project to repair broken sidewalks caused by aging tree-roots along this street on January 8, 2007.

Plans are to widen curbs for wheelchair access and to add groove lines for the visually impaired by the end of this year. This process to redo and upgrade sidewalks is making it difficult for wheelchair users like Kemp to move around.

There are guidelines and standards to ensure the safety of pedestrians during roadwork, but no legal requirement to give people with disabilities safe and equal access.

“By myself, it’s safer to be on the road,” said Kemp, who finds daily tasks like going to the bank across the street from her apartment more difficult than before.

“If … accidently you move [the ramp] when you’re trying to get over it, you topple right over.”

Another resident of Point Grey, Joseph Nagy, a manual wheelchair user, admitted to having a few close calls himself. For him, it’s not the ramps, but the loosely packed gravel used to cover unfinished grounds.

“If [my wheels] dig into the loose gravel that means I would be flying out of my chair,” explained Nagy.

There are currently 17 road construction projects in Vancouver, but developments like the West Broadway Street Renewal scheme were delayed because of the city strike.

It’s one of a number of renewal projects across Vancouver, which is undergoing a construction boom, partly fueled by the prospect of the Winter Olympics in 2010.

Road or sidewalk construction is regulated by the city’s engineering department which must approve all work plans. 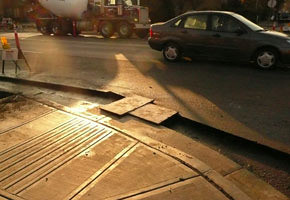 “When a contractor does not comply or does not seek our approval, their work is stopped,” said Joe Walls for the City of Vancouver Engineering Services Traffic Management.

City engineers say they follow rules set out by the Canadian Standards Association (CSA) to ensure that pedestrians are safe when they use roads and sidewalks during construction.

They also follow the street and traffic by-law that sets out provisions for street closures, and the Ministry of Transportation Traffic Control for Work on Roadways manual that specifies methods to set-up safe detours and signs to guide cars and people.

These are only guidelines, explained Rhys Williams, Manager of Streets Design for the City of Vancouver, rather than laws. City engineers and construction workers follow “best practice” rule-of-thumb, he added.

Jane Dyson of the BC Coalition of People with Disabilities (BCCPD) said that she doesn’t know what best practices mean after looking at the photographs of construction ramps used on West Broadway.

As co-director for the Advocacy Access Program at BCCPD, she said that these ramps were too narrow and weak to support people in wheelchairs.

She also added that there seem to be a lack of communication and application of the policies and standards for safe and accessible passageways for people with disabilities.

Time to revamp the ramp

Ramp sizes are set out by the CSA, but these are only recommendations. Williams from the City of Vancouver explained that safety accommodations for the public all depend on the space available on the construction site. 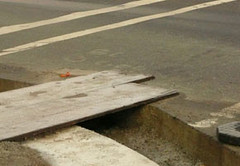 As recommended by the CSA on the Disabled Persons Community Resources website, ramps should be as low as possible. The steeper the ramp, the more dangerous it is for people on wheelchairs, scooters, and walkers, to use on their own.

If the ramp is not alongside a wall, then there needs to be a lip on the edge of the ramp to prevent wheelchairs from falling off the sides.

Standards are difficult to determine because wheelchair sizes vary greatly. As a result, there is no “typical” dimension to follow by, said Christine Staddon, Project Coordinator for Access Guide Canada (AGC).

“The standard that was developed [by the CSA] is for the minimum recommended door clearance that would accommodate most wheelchairs,” said Staddon.

Wheelchair users like Nagy said that it’s just pure stupidity on the part of the city to not consider the different needs of those with disabilities.

Disability advocates say that sometimes it takes someone to sue the city before anything gets done.

“If people are staying at home because of construction, that’s a tragedy,” said Dyson of the BCCPD. “The city is really failing them and this has to be changed.”

The time for reports is over: it is time to act to ensure aboriginal students’ success, the executive director of…

Members of the Vancouver Downtown Eastside’s community have praised new police guidelines to protect sex-trade workers, but are also raising…

B.C. students use games to level up virtual training for doctors