At 59, Wendy lives in a bleak single room occupancy (SRO) building in Vancouver’s Downtown Eastside. After raising a family and being employed for most of her life, she is now forced to deal with her sometimes violent and drug-addicted male neighbours. “For women my age it’s like living in the third world.” 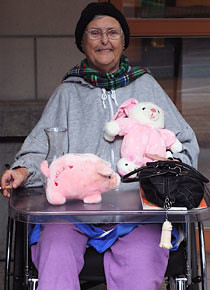 While elderly women are becoming a greater proportion of B.C.’s residents, they are also becoming increasingly vulnerable to poverty. About one in four women aged 65 and over have incomes below the Low-Income Cut-Off (LICO) line. This high prevalence of poverty among elderly women makes them more susceptible to violence and abuse by partners and caregivers.

“We’re expendable,” says Wendy, wrapped in tattered blankets and old towels for warmth. “Being a woman, being older, being handicapped, for each element you become one step lower in the eyes of our government.”

Charmaine Spencer, professor of gerontology at Simon Fraser University, says that elderly women suffer from a lack of resources on every level. “The people who are working on women’s issues tend not to see older women. Part of that reflects that they are so stretched in the first place.”

Cuts
Since 2003, B.C.’s Liberal government has cut $1.7 million from 37 women’s centres, in addition to cutting funding to 24-hour women’s crisis lines, transition houses, and support programs. B.C.’s seniors’ advocate and poverty law programs have been eliminated, and other key services accessed by elderly women have been reduced, says Spencer.

The Minister’s Advisory Council of Women’s Health, the Ministry of Women’s Equality, the Women’s Health Bureau, the Human Rights Commission, and pay equity legislation have all been eliminated.

At the federal level, the Conservative government has cut $5 million from Status of Women Canada, has changed the mandate, dropping the word “equality” from the agency’s list of goals, and is no longer funding women’s groups that take part in advocacy, lobbying, or gender-based research.

Alice West, the 80-year-old chair of Women Elders in Action (WE ACT), says that cuts to Status of Women Canada have been devastating.

“They were sponsoring our study into the pension program, but they have told us that they will not fund us anymore. They say we can’t advocate, can’t make noise about things that are wrong, can’t criticize the government. If they’re not going to fund us on that basis then what will they fund us for?”

The cuts to the Status of Women could not have come at a worse time for elderly women, says Spencer. “The door has now been shut on them. There really isn’t a voice for them.” 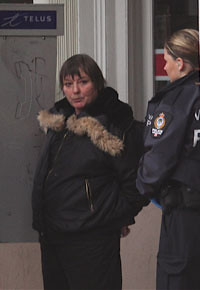 She says that a lack of transition homes is one area where the needs of elderly women are not being met due to cuts and shortages of funding.

AMA House has provided 133 women with shelter since opening in 2004, and has had to turn away more than double that number due to lack of funding. “We cannot meet the needs of the growing population, there needs to be specialized housing,” says Suzi.

She added that transition houses are typically noisy and chaotic and the staff are much more familiar with the needs of younger women. “They [elderly women] also have different barriers when it comes to abuse situations.”

“For older women, many stay in abusive situations because there is nowhere else to go, there is no affordable housing, no social programs,” says Spencer.

“Imagine that you’re a woman who has been married for 40 years and all of the sudden your violent marriage has fallen apart and you’re trying to make it in the work force with very few skills and very little support,” she added.

Efforts to be heard
Both Wendy and Alice say that not enough is being done to address the plight of elderly women living in poverty.

“Right now the Olympics are the highest priority with this government,” said Alice.

“The provincial government is very patronizing. They’ll listen, but sometimes I feel like somebody is patting me on the head saying, ‘don’t worry dear, I’ll look after it’, and nothing happens.”

Wendy takes a different approach to being heard. “I’m not one step lower, I’m here to stay and get in anyone’s face if I get pissed off enough. And I’ll stand on a soap box and scream if I have to.”

USA Swimming is right-on. The governing body of the American swim team suspended Michael Phelps after damning photos surfaced. The…

Do you own a cryovac?

Pop food quiz! Q. What food movement scorns the stove, popularized gelatin and foam, and has no problem selling you…

In her basement studio in east Vancouver, Morgan Green pulls out a few pieces of handcrafted jewelry she’s been keeping…