A new judging system to be introduced at the World Cup season opener on December 13 in Tignes, France, could cost crucial points for Canada’s top male mogul skier. 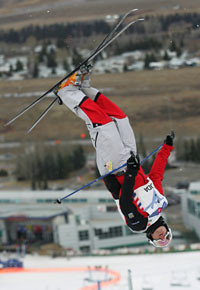 Alexandre Bilodeau is worried that the new categories added to off-axis judging will lead to him losing marks because the judges may not be able to identify the different jumps.

“I don’t know how the judges are going to see the difference,” said Bilodeau, a member of Canada’s national men’s mogul team who is ranked number three in the world. “Even I have a hard time to define what the difference is.”

Bilodeau, 20, is no stranger to the off-axis jump. With a background in aerials skiing, he has been able to bring his skills to moguls, allowing him to be on the cutting edge of the sport.

In his past few seasons, Bilodeau has been the first skier in the world to perform a variety of tricks including a double-twisting flip in 2005. A year later, he followed up with an explosive corked 1080 (three spinning rotations on a diagonal axis) and a back double-full to win gold at Mont Gabriel, Quebec.

The change in moguls judging reflects the sport’s growing appreciation for the different variations of the off-axis jump. Off-axis refers to the position the skier takes during the take-off of a jump. When launching him or herself into the air, the skier tilts the axis of their rotation.

The new system will add three new classifications for the jump. Now officials will be able to give points for tricks that have a higher degree of difficulty. That means the two air judges assigned to the panel will be better equipped to asses a skier’s overall jumping performance.

“Athletes that were doing cork jumps last year were not being rewarded for the additional difficulty,” said Terry Campbell, a top level Fédération Internationale de Ski (FIS) official. “This year their marks will elevate with the increase in the degree of difficulty, provided they do the jump really well.” 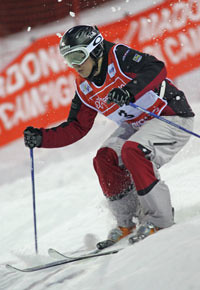 Officials have had little time to work out the kinks of the system and they may not be comfortable with it yet, Campbell warned.

“It becomes a learning on the fly experience for judges this year because this is a whole new concept brought in to us and we are expected to use it flawlessly,” said Campbell.

He said judges could have problems telling the difference between the tricks and which categories they fall into. This could result in athletes losing points because they are not rewarded with the appropriate marks for having a complex jump, costing them a trip to the podium.

“Losing two points on 30 is a lot,” said Bilodeau. “That is the difference between the first place and the 16th place.”

The FIS is fast-tracking this system to the World Cup level so that judges will be ready for the Vancouver 2010 Olympic Games.

“It is advancing quickly to the World Cup level to get all the bugs worked out this year,” said Campbell. “Then for the Olympics there won’t be any flaws because it has already been used for at least a couple of years.” 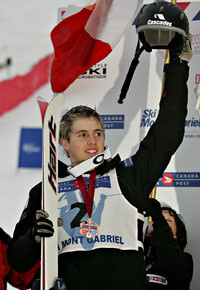 He said he is worried that the new jumping categories have expanded too quickly and the judges will not know what to look for.

“A lot of the judges know that they don’t know a lot of this stuff and that they are playing catch-up continuously and they are eager to learn,” said Kober. “But they are just not there yet.”

The coach doesn’t see the new system as having an immediate effect on the difficulty of skier’s jumps.

Athletes at the World Cup level train for years to get their jumps perfected. They can’t afford the penalty for mistakes. For skiers to suddenly go out and learn new tricks at the high speeds and on the challenging courses they ski could result in many lost points.

“The trade-off between a higher degree of difficulty versus being just a little off balance on the landing is just not worth it,” said Kober. “We need to be really sharp, perfect, and clean.”

Canada’s best chance of Olympic gold in the moguls, Alex Bilodeau, is not planning to change his tricks unless there is a notable difference in the judging this ski season.

“It will be interesting,” said Bilodeau. “I guess we will see at the first World Cup in Tignes.”

Related: A glimpse into the world of moguls

The Vancouver Eclipse visually impaired hockey team has a new home at Hillcrest Community Centre. The building that hosted the…

Vancouver was shortlisted on Oct. 4 as one of four Canadian cities in a joint bid with the U.S. and Mexico

[fve]http://vimeo.com/86745995[/fve] Tyler Mosher shattered his back snowboarding in Whistler 14 years ago. He was told he would live in a…