Transit service is not the only problem that UBC faces without a local government.

The University belongs to Electoral Area A, a region in Metro Vancouver that has never been incorporated as a municipality. The area also includes Bowyer and Passage Islands off the coast of West Vancouver, as well as a region north of the Indian Arm River on the North Shore.

These areas do not receive Metro services such as garbage and recycling pickup, parking enforcement or policing (RCMP provide law enforcement to UBC).

UBC’s population is estimated at over 8,000 people. It has a single elected representative to Metro Vancouver and a single vote at its meetings.

The University has encountered numerous problems related to planning and law enforcement on its own property.

UBC Parking was taken to court in April 2007 by driver Daniel Barbour, who alleged he was denied the chance to appeal five parking tickets before he paid them. His lawsuit against UBC questions whether the University can define parking violations and collect fines – case is currently before the BC Supreme Court. 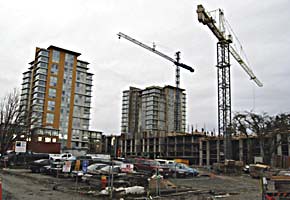 Marine Drive student residence was halted by Wreck Beach advocates in 2004. They complained about the construction of two 20-storey towers that could be seen from the popular nude beach.

Metro Vancouver, then known as the Greater Vancouver Regional District (GVRD), told UBC that the towers exceeded height limits set out in the Official Community Plan (an agreement between UBC and the GVRD that regulates land use and transportation). The maximum height for a residential building at UBC is 53 metres.

The towers were later redesigned – one would stand 18 stories high and the other would be 17 stories. Construction of one tower has already completed and final construction, which will build another tower, a low rise-building and commons block, is expected to finish in 2009.

Every evening between 10 p.m. and midnight, 23-year-old Kaleigh Coolsaet takes her two pugs for a walk near Kitsilano Beach….

Gender parity in the trades is still under construction in B.C.

Only four per cent of trades workers in B.C. are women

A recent report calls for long-term planning to protect people forced to flee their homes during floods and wildfires.

Are you a high-risk gambler? University researchers can tell

Swinging between small and large bets may be a sign of problem gambling, new research from UBC shows.

Compostable plastic abounds with no recycling solution in sight