Dec. 6 is Canada’s National Day of Remembrance and Action on Violence Against Women. This day marks the anniversary of the murders of 14 women in 1989 at l’École Polytechnique de Montréal. They were shot and killed by Marc Lepine because they were women. 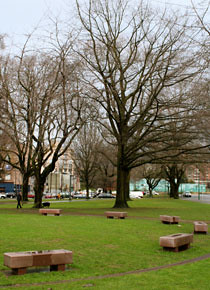 For Beatrice Starr, a grandmother and volunteer with the Downtown East Side Women’s Centre, Dec. 6 is a very personal day. “I like to get involved…because I’ve been through it and so has my daughter.”

Beatrice, who endured 11 years in a violent marriage, lost one daughter due to the physical abuse she suffered while pregnant and was ordered to surrender her other children to foster care.

Battling alcoholism and living in poverty, Beatrice’s options were limited. “I tried to run away from him but I didn’t have a place to run, or money to get out of town.”

Beatrice was eventually able to leave her husband and began a new life.

Sober for 25 years, Beatrice now counsels other women who are dealing with issues of poverty and abuse. For her, Dec. 6 is about sharing her story with other women. “I can come out and speak about the violence I went through. It makes you feel good inside.”

While Dec. 6 commemorates the l’École Polytechnique de Montréal massacre, it is also a day to reflect on gender-based violence across Canada, and to remember those who have died or are suffering now as a result of violence.

The Downtown East Side Women’s Centre is holding a march and vigil on Dec. 5, beginning at 6 p.m. at 302 Columbia Street and ending at Thornton Park.

For more information contact the Power of Women Group at 604-681-8480 or email [email protected].

Cricket at UBC: A league of their own

In elementary school, my classmates and I played glove baseball. Since we (sensibly) weren’t allowed to bring bats to school,…

Parents in East Vancouver are worried about Olympic road closures that are three weeks longer than expected. Principal David Ferguson…