Welcome to the first installment of East Van Rapporteur, a blog about the personal experiences of reporting in Vancouver’s Downtown Eastside, the poorest postal code in Canada.

By Darren Fleet
This story begins with a visit to an old haunt, a vacant lot at 950 Main Street. A 30-metre by 30-metre plot of barren earth, shouldered by the American and Ivanhoe hotels, caught in limbo between a booming economy and social policy in Vancouver. I wrote my first story in October 2007 about this space. 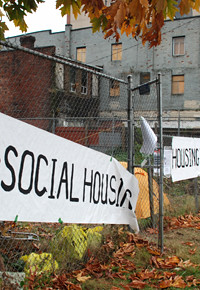 After attending a Vancouver Council meeting yesterday, I visited 950 Main Street to get perspective on what transpired at the council meeting. Something significant had happened, virtually unnoticed. Prior to a heated debate about banning indoor smoking, a routine report was delivered to Vancouver City Council from BC Assessment.

The report said that the value of SRO’s (single room occupancy hotels), the primary residence for people in the Downtown Eastside, have increased 40 to 60 percent, necessitating a property tax increase and a potential increase in rents. For an area that already has 2000 homeless people on its streets, this could have severe consequences.

Back in October 2007, 950 Main Street captivated the eye of Vancouver’s media outlets.

Equipped with a hastily fashioned outhouse, tarps, tents and camping stoves, 10-15 homeless people erected a tent city, demanding that the city and the province deliver on their housing promises. The protest lasted a week.

Miloon Khotari, UN Special Rapporteur on Housing, visited the squat, a noted embarrassment to our acclaimed city. After a few days, the media scrum that followed Kothari, collecting sound bites and official reactions, drifted away, leaving archived stories, official calls for action, and this empty lot.

Today, all that remains at 950 Main Street are 1000 four inch by one inch strips of cloth tied to a chain link fence, spelling Homes Now. The muddy hollow is now entering its sixth year of red tape.

At this squat I met a man whose story I decided to follow. He was jovial and opinionated, telling tragic tales of life on the street and the individual goodness of people caught in a cycle of poverty and government policies. It was a story media craves, an example of how opportunity and affliction come hand in hand in a land of milk and honey.

The man and I agreed to meet in a park two weeks later, where he, and two other men, extorted me out of twenty dollars beneath a barrage of insults and suspicion. The primary assailant ended with a question:

“What in the hell kind of reporter are you anyway?”

Back at 950 Main Street I thought about this question and the council meeting earlier in the day. Torn between the personal and the official, policy and people, and a picture too big to comprehend in the moment, I decided to write about smoking.

Professional athletes are no longer just competitors, they are walking billboards. Sports superstars like Michael Jordan, Jeff Gordon, and Phil…

It’s treaty-negotiating time in Iraq, and it could mean a change in the way private security is handled there. The…

A lot of media attention is swaying Valentine’s way. I’m glad that there seems to be more awareness about the…

A hero for a new generation

A new hero is joining the fight for justice in the Philippines. “Barbargsa – Blood of the Honorable” is the…

The digital age of innocence

Anne of Green Gables, hero to all Canadian pre-teen girls, is back in business. She’s received a bit of a…