It’s also very convenient when I’m looking for videos from the motherland. I remember way back, when my mom and I would borrow soap-operas from the local Korean super-market, hoping that the old VHS tapes wouldn’t get eaten by the video player (VHS-tapes? I realize I’m really dating myself here…sigh).

My Chinese friends don’t have such problems these days. They can go onto any number of Chinese video-sharing sites where they can watch their fave soap operas and Canto-pop stars.

In fact, there’s a huge turf-war raging in China over these video UGC-sites. At one point, over 200 video-sharing sites operated in China. Now there are about ten, excluding video-sharing services by the big portal sites such as Sina and QQ.

In the battle for video-UGC “eyeballs” in China, here are some issues to mull over.

Let’s start off with the basic proof. Video-UGC is big and will only grow bigger. It’s a pretty obvious point to make but it’s important to note that monetization strategies are not well-formulated at this point. Despite this, people are willing to invest and invest big in the field. 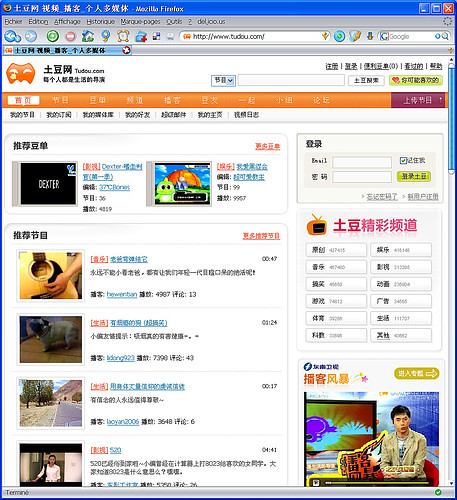 In China, the race is heating up because of the Beijing games. It’s “make-it or break-it” time, because the UGC site that catches the most public attention and usage during the games will win a lasting reputation.

Having said that, there are numerous issues and hurdles in the battle for Chinese eyeballs.

1. As always, money is key. Even basic bandwidth is a key expense for the video UGC-market and the past year has seen furious amount of venture capital into a number of popular UGC-sites.

2. Some Chinese observers think the UGC-sites need to pare-down. Less social-networking functions, they say, and more of the essentials of a UGC-site: more online storage, faster speed, and better SEO (search engine optimization). This is an interesting point, given that UGC-sites focus on social networking tools and applications.

3. Another is the issue of content. Chinese bloggers complain that despite the craze over UGC-sites, the Chinese public doesn’t create original content for these sites, especially for the video-sharing sites. They point their finger at the public and argue that the Chinese public is not part of that “You” deemed person of the Year by Time Magazine.

I understand these criticisms, but content does not always have to be original to be interesting and informative. What characterize the UGC-experience are the mash-ups, the derivations and commentaries. Heck, most of my blog-content belongs to the latter categories.

The CWR guys write: “MU Rong (Founder/CEO of PepTalk) told us that in some high WAP traffic generation area like Guangdong province, lots of people don’t have a PC. Mobile phone is their only way to access Internet. So when we talk about mobile UGC in China, we are looking at a much larger market than only thinking of Internet UGC.”

Whew, this battle for the Chinese UGC-market is turning out to be a doozy.  Guess, I’ll keep an eyeball or two glued onto it.

Walking in someone else’s shoes

Recently I happened to read the transcript of a speech given by John Furlong, Vanoc’s Chief Executive Officer, at the…

Condo vs. office conflict sparks debate about what city did wrong