A new hero is joining the fight for justice in the Philippines. “Barbargsa – Blood of the Honorable” is the latest comic offering from American psyops. 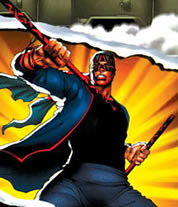 Witness the secret origin of Ameer as he returns home to find his country in shambles. Swearing to return the rule of law to his native country of the Philippines, Ameer dons a mask and begins the fight against the Abu Sayyaf Group of terrorists using his expert knowledge of kuntao, a Philippine martial art.

In the tradition of such other American psychological operations hits as “Deadly Legacy,” a 12-page land mine awareness comic starring Superman, this scintillating new comic was conceived, designed and distributed by American special forces officers in the Philippines. It’s being distributed in the Sulu Islands today!

Based on true events, including the Sulu co-op bombing of 2006, this comic follows Ameer as he bands together with local villagers to drive away the terrorists.

Parents and government officials will be pleased at the comic book’s strong anti-terror message, written to discourage young people from joining terrorist groups in the future. The book is carefully crafted to accurately reflect life in the Sulu islands, and police and Philippine military characters are portrayed in a positive light. It’s a message youth can relate to.

This already-popular comic is already popular in the streets of the Philippines, where children rip out pages and trade them with each other. T-shirts emblazoned with Ameer’s face are appearing everywhere.

Can you afford to miss this sure-fire hit?

Security threat ahead of 2010 games? You’d think so wouldn’t you?

Elections off to a muddy start

The elections for the executive of the Alma Mater Society (AMS), UBC’s student council, shot out of the gate last…

Frustrated with the English Language

“What in the hell kind of reporter are you anyway?”

Welcome to the first installment of East Van Rapporteur, a blog about the personal experiences of reporting in Vancouver’s Downtown…