Gwen Stefani’s cooptation of the Harajuku subculture is old news, but I find myself still pondering it.

Stefani first introduced the Harajuku Girls to her audience in 2004, when she hired them as backup dancers for her album, Love. Angel. Music. Baby, and they have been shadowing her ever since. The Harajuku Girls tour with Stefani, dance in her videos and even accompany her on the red carpet. 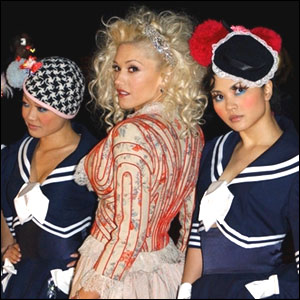 Rumour has it that Stefani’s Harajuku Girls (four Japanese women who range between the ages of 24 and 30), are under contractual obligation to speak only Japanese, although all four are apparently fluent in English.

Regardless as to whether or not these women are indeed prohibited from speaking English, the idea of Stefani’s Harajuku Girls is seriously disturbing.

The Harajuku subculture is named after the Harajuku area of Tokyo, known for its fashion and Japanese youth culture. From what I understand, Harajuku is about individuality and personal expression.

Stefani, however, has appropriated this subversive style and, in the process, reinforced stereotypes that portray Asian women as weak and submissive, as innocent but oversexed.

The Harajuku Girls giggle and shy away from the cameras, they bow to Stefani when she enters a room. They exist solely for the male and female gaze. They are essentially human props.

There is no doubt that what Stefani is doing is exploitation. When asked about the Harajuku Girls, Stefani likes to describe them as figments of her own imagination.

That these women are getting paid for their services is irrelevant. What Stefani has done can only be described as cultural hijacking. The Harajuku Girls’ art is not signified here, instead they have become Stefani’s personal sex objects.

I could even point to Stefani’s exploitation of the Harajuku Girls as another example of U.S. attempts to dominate Japan. Hmm, too far maybe?

No girls allowed: the dark ages of comedy

Who deserves the public's attention?

When the trial for convicted serial killer Robert Pickton began in early 2007, the media couldn’t get enough of it….

Credential inflation: what will your master’s be worth?

There was a time when a bachelor of arts would guarantee you a decent job. Baby boomers with BAs were…