When Stefanie Ratjen first came to the University of British Columbia, she never imagined she’d need a lawyer – or that she would be part of a resurgent left wing student movement on campus.

A week after being arrested for obstructing a peace officer, the vice-president, external for the Alma Mater Society (AMS), UBC’s student union, is facing charges along with 18 other people after a protest and bonfire got out of hand on April 4, 2008.

A peaceful concert called Knoll Aid 2.0 was meant to raise awareness that day of campus development that could uproot the grassy knoll, a popular green space near the Student Union Building (SUB).

The event turned to chaos at about 8 p.m. after concertgoers lit a bonfire with wooden palettes.

A Youtube video shows a group of people holding hands and circling the fire. It then shows flashes of red and white light as a firefighter arrives to subdue the flames. Ratjen and a number of protesters can be seen surrounding the firefighter as he approaches.

That’s when the police started to arrest students standing in the way.

Ratjen was arrested by two police officers, who held her face-down in a pool of fire-retardant foam before others linked arms with her to stop the arrest.

“There was never any kind of preconceived notion that there would be such a police presence there and that anyone would go through what they did,” she said in an interview.

Students for a Democratic Society 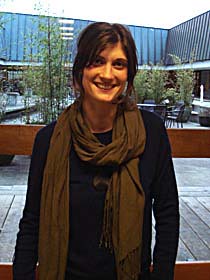 Ratjen is a member of Students for a Democratic Society (SDS). Together with over 100 other students, she is part of a group that has marked the resurgence of a social justice movement at UBC, a movement that is not shy about showing its anger with imminent changes at its campus.

Those changes include the construction of a new University Square, a commercial centre to be located near the main hub of campus that will include food outlets, retail shops, hair salons and various other amenities. Its construction may require the uprooting of the grassy knoll.

The group is also concerned about other growing commercialization on campus, including the proliferation of high-end, high-density housing. Rows of townhouses and condominiums dot the area, with prices far outside the budget of almost any university student.

SDS is committed to raising awareness of the idea that these developments are eroding public space at UBC, as well as environmental sustainability, according to Ratjen.

“The way we treat our earth is very important,” she said. “Preserving green space is important, but it’s also important to preserve a social space.” 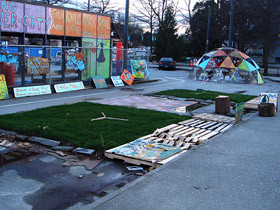 Last September saw the beginning of high-profile activity by SDS members. They demonstrated against campus development by erecting an outdoor living room called “Trek Park” replete with couches, lawns and tents near the proposed University Square.

The inspiration came from the “People’s Park,” an installation erected at the University of California-Berkeley in 1969 in response to development plans for student dormitories on its south campus area.

Nathan Crompton, a fifth-year political science student and SDS member, said his group is using the park to raise awareness of campus development.

Though a sizable movement has been organized against campus development, some students feel that SDS members have become a source of tension on campus. 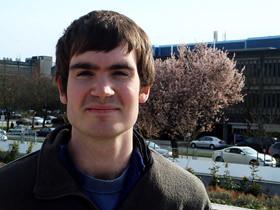 Matthew Naylor, a former AMS executive and member of the UBC Young Liberals of Canada, said SDS members, two of whom are current executives, have caused an ideological split within the student union.

“They demonize everyone who doesn’t agree with them,” he said. “They’ve called me a near-fascist, they’ve implied that I ran for my position to be a shill for the Liberal Party of Canada.”

Some cite an incident on the last day of classes as evidence of the increasing polarization on campus. A group of students gathered on the grassy knoll with signs that read, “Kno to the Knoll” and “Build Bus Loop Now.”

The demonstrators were set upon by an SDS member who began tearing up some of the signs and swearing at them.

“It was a pretty bizarre scene,” she said. “Other people have the right to protest, however frivolous [their cause] may be.”

The movement against campus development has drawn comparisons with the APEC summit in 1997 in which 2,000 students protested conference invitees such as Indonesian president Suharto and former Chinese president Jiang Zemin.

Dozens of students were arrested that day and several were pepper-sprayed after clashing with police. The incident triggered a public inquiry – and that’s precisely the outcome that SDS is seeking in the wake of the April 4 incident.

Jamie Doucette, one of the APEC protesters arrested in 1997 and now a PhD student in geography at UBC, has mixed feelings about UBC’s new protest movement.

“There’s a lot of green space on campus and I have no emotional attachment to the knoll, but I guess they’re kind of using it as a metaphor,” he said. “That said, if they’re trying to address these problems I guess there’s probably better ways to address them than to have a bonfire.”

Despite clear disagreements among students with the SDS cause, Stefanie Ratjen said the movement to resist campus development is growing. The arrests, she said, have gotten people talking.

“I don’t see Trek Park or that kind of initiative stopping any time soon,” she said. “I think if anything there’s momentum that’s being built right now.”

Wet winter ahead means challenges for people on Vancouver streets

This winter is forecast to be warmer and wetter than average

For Trisha Baptie, the decision not to fund women’s and Aboriginal groups as part of BC’s missing women’s inquiry is…