Just when things seemed to have quietened down along the Canada Line construction corridor, businesses and residents are protesting increasing noise pollution caused by the constant drilling. 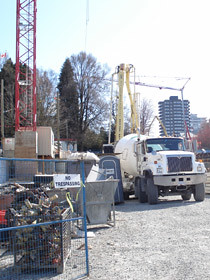 Accustomed to the traffic congestion, new complaints relating to building the new transit line from Vancouver International Airport to Downtown indicate that the noise is driving people crazy.

Canada Line officials say that ambient noise in the area has reached up to 80 decibels despite what they call “noise reduction measures,” such as sound barriers along the road. 80 decibels is comparable to standing next to a passing freight train.

Data from an ambient noise survey of the area obtained from British Columbia’s Environment Ministry in 2003 indicate that the average decibel level prior to construction starting in 2005 along the corridor ranged from 60.9 to 64.3, which is within the range of regular traffic levels.

“We’ve tried to make adjustments as best we can,” said Steve Crombie, Canada Line’s vice president for public affairs. He added that residents living two blocks each side of the dug up streets were consulted on building work.

“They don’t care about us,” said Mike Shinder, manager of the Rasputin Russian restaurant on Cambie. He didn’t remember receiving any notices or warnings from Canada Line regarding building work or noise levels.

“We’re 50 per cent down in business because of the construction,” continued Shinder. His words were echoed by Cambie Café manager Stanley Ng, who said there was “lots of noise.”

“It’s very bad,” said Ng, describing the street closures restricting customer access to his restaurant, all against a backdrop of drilling and digging.

Photo gallery: See the construction for the Canada Line

Salah Saleh, manager of Zako’s Deli near the Cambie and Broadway intersection, said the traffic bothered him much more than the noise.

“The media is not helping too”, he said, as radio traffic updates warned drivers to avoid the Cambie-Broadway crossroads, losing him customers – while few people knew there was 24 hour parking next to his eatery.

“We’ve certainly had complaints about noise”, said Crombie. Along with noise barriers, Canada Line has placed shrouds and canopies over exposed track passing through Yaletown and Downtown to block out noise from service trains and work crews drilling.

As for the road closures and traffic congestion affecting people like Shinder and Saleh, Crombie said, “we‘ll put a traffic management control plan in place.” Crombie said that Canada Line avoided closing down whole streets as far as possible. The Cambie-Broadway intersection is still open to traffic, and workmen can be seen directing vehicle flow. 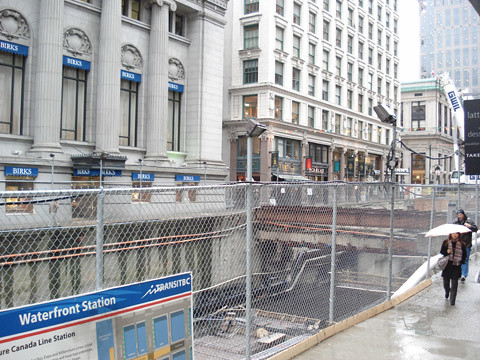 In the interim Canada Line officials have attempted to work with local people to address their concerns through a system of notices and email alerts, warning them of potential disruption that construction inevitably creates, despite people like Shinder saying otherwise.

These initiatives were welcomed by managers Virginia Nieuwenhuis and Hameeda Eshan at Zennkai Salon on Granville Street. They found the regular alerts and construction updates helpful, and appreciated Canada Line’s efforts to warn them of new work.

But they too still suffered from the effects. “The noise gives me migraines”, said Eshan.

November 30 2009 is the due date for completion of the Skytrain line, although tunnel boring is scheduled to end this summer – good news for annoyed residents.

By Cynthia Yoo By creating a carbon tax, British Columbia may have betrayed its poor in order to seed environmental…

Louise Schwarz talks trash or more precisely she talks about the virtues of reducing trash, but it seems condo residents…

A program at more than 60 Vancouver public schools that aims to teach schoolchildren about food is living on borrowed time. Think…

By Cynthia Yoo On a chilly Friday evening, a large crowd packed into the auditorium of St. James Church in…