Tofino, one of the most exposed communities on Vancouver Island, is a high-risk area for tsunamis.

You know something bad is about to happen when you wake up to the sound of wailing sirens in the middle of the night. What to do next is the big question you’re trying to answer while sitting confused on your bed.

This is exactly what happened on Vancouver Island in 2018. A tsunami alarm went off in the middle of the night and residents did not know where to go or whether they were in danger at all, a study shows.

Inspired by this event, Dr. Ryan Reynolds, the author of the study and researcher at the School of Community and Regional Planning at the University of British Columbia, has developed an easy-to-use app that will help households prepare for future weather warnings.

CHERP (Canadian Household Emergency Response and Preparedness), is a three-phase research project that aims to empower people to deal with disaster events themselves. Reynolds has partnered up with seven communities on Vancouver Island to develop the app, which is in its final stages of development.

“You get a hazard profile with the app, which explains all the risks you may face in your community. When an emergency hits, there will be a clear plan in place for you, as soon as you tell the app which hazard you’re dealing with,” said Reynolds.

“What we want to do is, instead of saying ‘Here’s a map, do it yourself’, is say, ‘Okay, we’ve done that work, your house is at risk, or it’s not at risk, or maybe it’s on the edge of that.’ We tell people (facing tsunami risk) whether their home is in the inundation zone, out of that zone, or whether it’s within a certain range of that zone.”

The development of an app like CHERP is particularly relevant to British Columbia, which faced a number of extreme weather events last year from wildfires to extreme flooding. On top of that, the province sits in a high-risk earthquake zone.

According to Natural Resources Canada, 400 earthquakes occur each year in the province, and experts say a powerful magnitude 9.0 could hit any day. There’s an early warning system for the region, giving advance notice of an emergency, but safety instructions are not easy to access for those in a hurry.

“There’s almost too much information out there and, in emergency situations, it’s very hard for folks to know exactly where to look or what information is sound or helpful,” said Evelyn Horneck, a communications manager at the Marine Environmental Observation, Prediction and Response Network in Halifax, Nova Scotia.

“So something like CHERP uses really solid research that Ryan has put together and puts it right in the palm of your hand.”

Reynolds has partnered with the village of Tahsis, the District of Tofino, the Alberni-Clayoquot Regional District, Parksville and Qualicum Beach and the City of Nanaimo for phase one of the project, which should be completed in the spring. 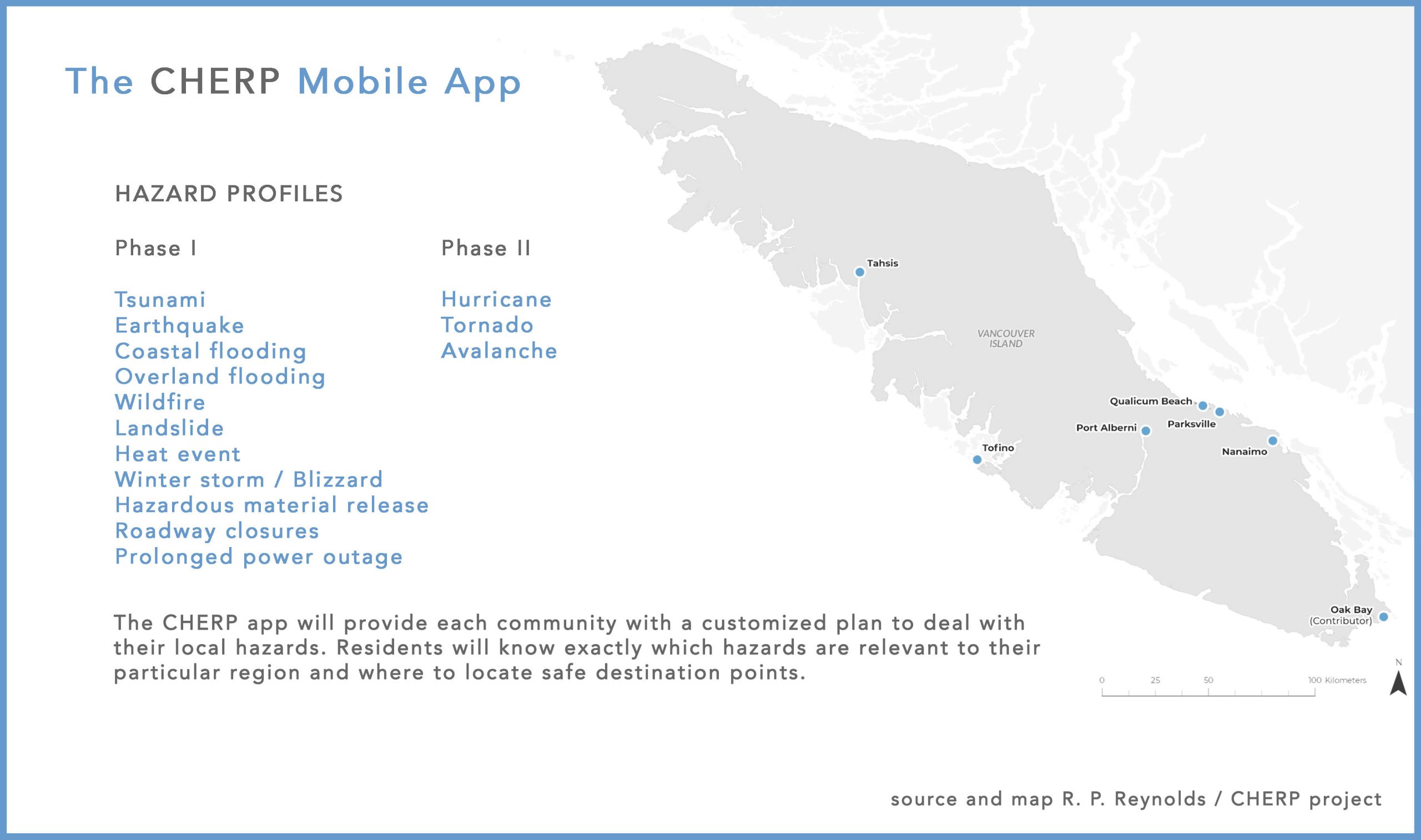 Reynolds explained that engaging with the communities has been essential to the development of his app and has led to true partnerships and personal relationships. He has been to most locations to understand the unique needs of each community and to exchange ideas with local emergency preparedness officials.

“We have a long history of trying to deal with tsunami hazards in the region”, said Keith Orchiston, emergency program coordinator for the district of Tofino. “My relationship with Ryan must be going on for about three years now.  Even prior to CHERP, Ryan has done extensive work in the Port Alberni region.”

Phase two of the project aims to expand beyond Vancouver Island and include other communities across B.C. and Alberta. It will be available to download on the app store for free.

Act I: A well-dressed man in his gleaming, luxury bathroom curses his waterless tap. Act II: A Michelin chef serves…

View Larger Map This is a map showing the location of Metro Vancouver’s sewage treatment plants. The green icons are…

Debate bubbling up over fish farms in B.C. after dead humpback found last week at an abandoned site

A low-impact walkway and habitat improvements could be compromise options for a controversial stretch of foreshore in Vancouver’s Kitsilano, where…

In the shadow of Enbridge, Kinder Morgan pipeline looms large

On March 24, 1989, the Exxon Valdez oil tanker ran aground off the coast of Alaska, resulting in the one…